You are at:Home»Entertainment»Will Smith shares first snap of Aladdin cast: ‘I’m over here gettin my Genie on’ 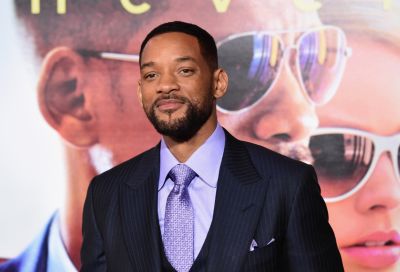 As filming for the Aladdin live-action remake gets underway in London, Will Smith has given fans a glimpse of what’s in store by sharing the first cast photo.

The Hollywood actor, who is playing the Genie (the character originally voiced by the late Robin Williams in the 1992 animated film), took to his Facebook page to express his excitement at being part of the movie being helmed by Guy Ritchie and Sean Bailey, Disney’s head of motion pictures.

In the picture, he poses for a group selfie with his co-stars Mena Massoud (Aladdin), Naomi Scott (Princess Jasmine), and Marwan Kenzari (Jafar).

“We just started shooting Aladdin and I wanted to intro you guys to our new family,” the caption read. “Mena Massoud/Aladdin, Naomi Scott/Princess Jasmine, Marwan Kenzari/Jafar, and I’m over here gettin my Genie on. Here we go!”

The Men In Black actor’s photo was shared over 16 thousand times and has 220K likes and counting.

The 48-year-old’s co-star Massoud also took to Twitter to share the same image, adding: “Agrabah just got a lot hotter. Ooof! Gonna be keeping you posted on everything Aladdin peeps.”

Although still in the early stages, the Aladdin reboot’s casting choices have already provoked controversy. Many fans of the movie believe producers should have hired actors of Arab heritage to play Aladdin and Princess Jasmine as the story is set in the fictional area of Agrabah, assumed to be in the Middle East.

Back in July, there were whitewashing claims after a non-Arab actor, Scott, was cast in Princess Jasmine’s role. Scott is of Indian, Ugandan and British heritage while Massoud is of an Egyptian background.

Disney faced further backlash for introducing a character called Prince Anders who did not appear in the original animation and casting white actor Billy Magnussen. The original folk story Aladdin and the Magic Lamp from The Book of One Thousand and One Nights includes no white characters.

“Was it really necessary for you to throw a white dude in the movie, Disney? Ain’t no one asked,” wrote one critic on Twitter.

British actor Ed Skrein recently pulled out from playing Major Ben Daimio in the Hellboy reboot after similar whitewashing allegations were leveled against the film. The 24-year-old star said he didn’t know the original comic book character was of Asian descent when he accepted the role.