You are at:Home»News»Will Anthony Scaramucci Run For Office? His Friends Claim He’s “100% Serious” 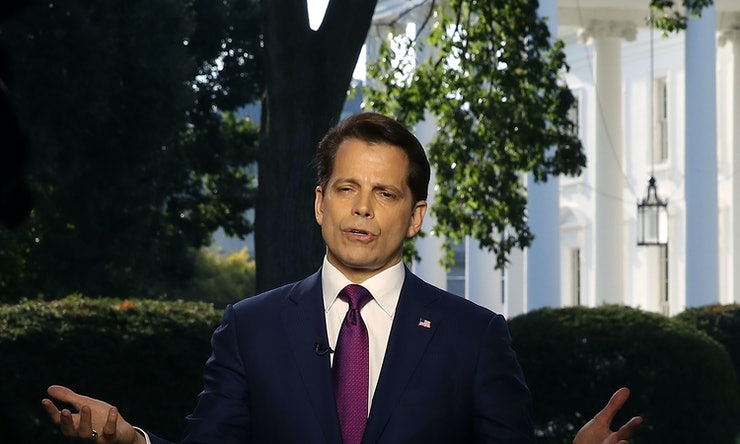 Is the Mooch preparing a comeback? According to BuzzFeed, former White House Communications Director Anthony Scaramucci could be considering running for public office. Although Scaramucci categorically denied the report, the Mooch’s friends claimed that he’s seriously thinking about running for office — including for president of the United States.

“President of what? Don’t make stuff up,” Scaramucci told BuzzFeed in response to the reports. “Not running for anything. I am back at work.” On Twitter, Scaramucci called the report “fake news.”

But BuzzFeed reported that the former White House staffer had reportedly discussed the possibility of public service with multiple friends lately, and supposedly told them that he does indeed want to run for office some day. Former Trump advisor and Scaramucci friend Bryan Lanza hypothesized that such offices could include mayor of New York City or governor of New York.

“If you told me he’s running for governor of New York or mayor of New York City, I would 100% believe it,” Lanza told BuzzFeed. “He’d be the second greatest show on earth. That would be fun, I might move to New York to help make it happen.”

Meanwhile, an anonymous source implied that the Mooch supposedly might have his eyes on the Oval Office.

“He was 100% serious about [a political run]and asked us if we thought he would be a good president,” this source told BuzzFeed. Again, Scaramucci has firmly denied the reports.

Scaramucci, a former Wall Street investment banker, was hired by Trump to lead the White House’s communication wing in July. Although he only worked for the administration for 10 days, he drew a lot of attention during that time for his colorful and often entertaining personality, as well as for his public feuds with other White House staffers. Some compared him to “That Guy,” a 1980s businessman stereotype from the show Futurama, and an off-color interview Scaramucci gave to the New Yorker quickly made him meme fodder on the Internet.

“I’m not Steve Bannon, I’m not trying to suck my own c*ck,” Scaramucci said in the interview of Trump’s then-top advisor. “I’m not trying to build my own brand off the fucking strength of the President. I’m here to serve the country.”

During his short tenure in the Trump administration, Scaramucci also had a high-profile feud with then-White House Chief of Staff Reince Priebus, whom he accused of leaking sensitive information to the press. In the New Yorker interview, Scaramucci predicted that Priebus would “be asked to resign very shortly,” and Priebus did indeed leave the White House several days later. He was replaced by Gen. John Kelly, however, and   Kelly immediately fired Scaramucci as part of a broader attempt to bring order to the White House.

While Scaramucci was still working for Trump, his wife Deidre Ball filed for divorce. She was nine months pregnant at the time, and Scaramucci was reportedly at an event with Trump when Ball gave birth.

Although the Mooch has remained in the public eye since leaving the Trump administration, including making an appearance on The Late Show With Stephen Colbert in August, his post-White House plans remain unclear. He  reportedly signed with a PR agency in Hollywood in August, and has since been seen hobnobbing with Bo Derek, Ryan Philippe, and other Hollywood stars.

In addition to this, Scaramucci had been plugging something called The Scaramucci Post on Twitter. Although the nature of this project hasn’t yet been unveiled, some speculate that it may be a new media company that the Mooch intends to helm.

mooch ado about nothing pic.twitter.com/ufwrAGNYLA

mooch ado about nothing pic.twitter.com/ufwrAGNYLA

Although launching a new media venture may seem mutually exclusive with running for office, that’s not necessarily the case: Though the man himself denies running for office is even a possibility, Scaramucci’s friends told Buzzfeed that he reportedly isn’t considering a go at public office until Trump is no longer president.