You are at:Home»Top Stories»Why Filming Carpool Karaoke Segment Was Pretty Uncomfortable, According To The Foo Fighters 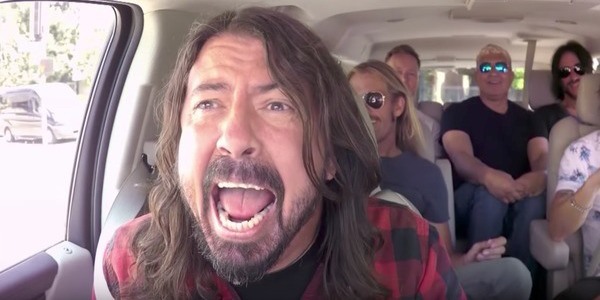 They have become, without question, one of the most popular recurring features on late-night TV — a viral sensation that has pop and rock stars clamoring for time in the car seat. I’m talking about James Corden’s Carpool Karaoke, and so far, they have attracted the likes of Mariah Carey, Britney Spears, Justin Beiber, Elton John, Carrie Underwood, Lady Gaga, the Red Hot Chili Peppers and the Foo Fighters for The Late Late Show segments. They LOOK like a lot of fun, though the Foos are now saying that recording the segment was a bit of a drag. Guitarist Pat Smear (real name) has opened up about the carpool experience and said:

By hour three in dude’s car it got less fun. It kinda went on. When we stopped at Guitar Centre, that felt like we were done, but it was like, ‘This is halfway.’

For those who might not be aware of the concept, Carpool Karaoke has musicians joining James Corden on his “traffic-filled” ride to work (or, just driving around L.A.), where — to pass the time — the sing along with their greatest hits as Corden plays them on the radio and comments. Usually, they spark a lot of interesting conversations, and it’s .always enjoyable, when the band or singer plays along with the goofiness of the skit. The Red Hot Chili Peppers, for example, took the show OUT of Corden’s car and onto a stranger’s front lawn. And Gwen Stefani was joined by massive Hollywood A-listers Julia Roberts and George Clooney during her segment:

Part of the ick factor for the Foo Fighters, though, came from having to sing their OWN songs, as lead singer and guitarist Dave Grohl told NME:

He definitely is [a music lover]. And he’s a very nice guy. But y’know, I don’t mind singing my own songs at Glastonbury or The O2 but if I had to sing you a song right now I’d be too embarrassed.

Makes sense. There is something a little awkward about making these rock stars perform their songs in a car. Britney Spears ALSO has come out and said the whole experience is kind of awkward. Especially the guys (or girls) in the band who don’t sing. Pat Smear, for example, isn’t a lead singer. And for most of the segment, he looks like he’s trying to have fun. But yeah, after the stunt in the Guitar Centre, the energy sort of leaves the clip. Skip to 12-minutes to see:

Still, it’s not that eye-opening that filming a form of televised entertainment can be excruciatingly dull. Television sets are notorious dead zones of wasted time as shots are staged and lines are rehearsed. For a rock band used to performing live and feeding off of that energy, that has to be a difficult transition. Will that affect other people who are thinking of signing up for a ride in Jams Corden’s Carpool Karaoke? Or will the massive exposure that comes with being in a viral video be too much to ignore?