You are at:Home»U.S»What Does It Take To Write A Hit TV Theme Song? 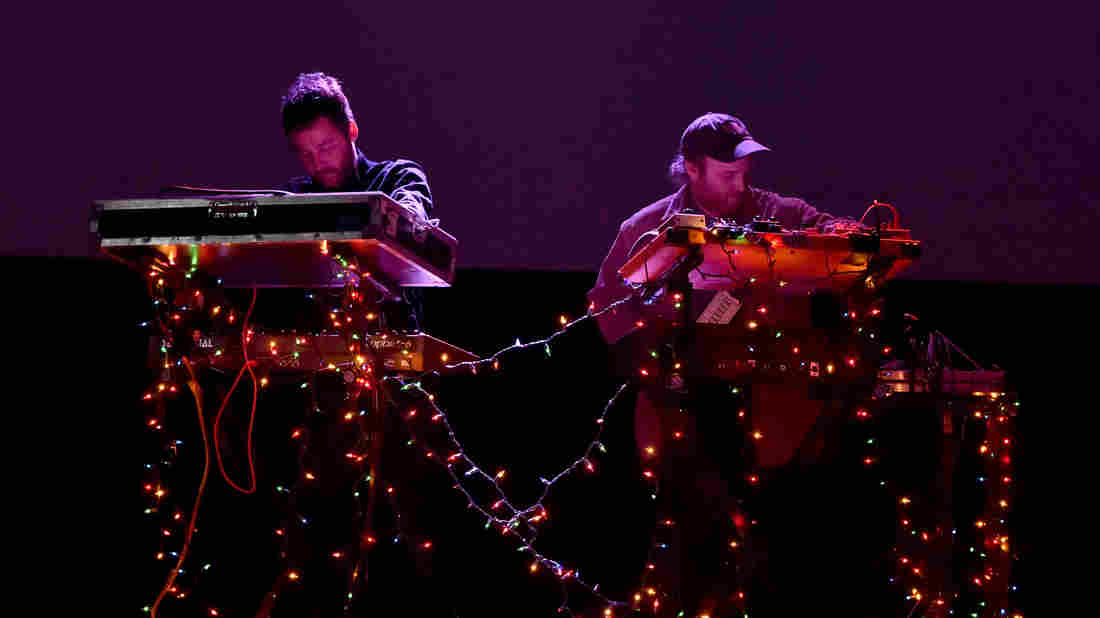 One of the more memorable TV theme songs in recent years comes from Stranger Things. Its theme was composed by Kyle Dixon (left) and Michael Stein, shown here performing at the 2017 ASCAP Screen Music Awards.

One of the more memorable TV theme songs in recent years comes from Stranger Things. Its theme was composed by Kyle Dixon (left) and Michael Stein, shown here performing at the 2017 ASCAP Screen Music Awards.

A popular TV show can inject its music into the pop culture bloodstream. Just think of The Twilight Zone.

As instantly recognizable as that theme is, though, it was actually something composer Marius Constant had already written — a piece of library music just sitting on a shelf. By contrast, Henry Mancini’s Peter Gunn theme was specifically composed as the main title for its show. That theme won two Grammys and broke into the top ten on the Billboard Hot 100 in 1959.

That theme is among Mike Post’s favorites. Post is a veteran TV composer himself; another favorite is the original Wild Wild West theme by Richard Markowitz.

“I loved that theme,” he says.

Post got his start as a session musician in Los Angeles, and played guitar on Sonny and Cher’s “I Got You Babe.” He also won a Grammy for arranging the Mason Williams hit “Classical Gas.”

“I was raised in the record business, and to me having a hit song was the goal. That was everything,” he says. “When I sort of fell into this business of being a composer for TV, all I was trying to do was write a 45-second, 1-minute hit record.”

“I wanted to sign the signature for the show,” Post says, explaining his M.O. for main title themes. “But I also wanted them to walk out hummin’ the thing.”

Sometimes finding a theme can be laborious, he says. L.A. Law took him five tries. But sometimes it’s effortless, like the theme he wrote for producer Steven Bochco’s Hill Street Blues.

“[Bochco] described the door going up on the garage, and a patrol car going through really depressing cityscape,” remembers Post. “[He] said, ‘What’s that sound like?’ And I said, ‘Well, it could be kind of poignant, and like the clock’s gonna tick.’ And literally — that was at CBS Studio Center — I went the five minutes to my house, I walked into my little office, and I was in E-flat immediately. And I don’t know how it happened, [but]30 minutes later I called Bochco and I said, ‘Okay, I got it.’ So he came over and he listened, and he went, ‘Okay, that’s my show. See ya!’”

One of the most ubiquitous TV themes was written in 1966, by Argentine composer Lalo Schifrin. But his first draft, a tune that became known as “The Plot,” didn’t fit the bill.

That became the true Mission: Impossible theme, Schifrin says. But for the melody that was going to herald the show week after week, network executives wanted a theme that said mission accomplished.

Producer Bruce Geller told Schifrin what he thought the show’s main title needed: “I want you to write a theme that, when people are in the kitchen having a soft drink and the television set is in the living room, you can hear it from the kitchen and say, ‘Oh, Mission: Impossible is now!’”

Around the turn of the millennium, TV executives started chopping main title sequences down to 15 seconds or less, making themes about as musical as the sound of your computer booting up.

“No main titles!” Post says, shaking his head. “Well, it isn’t that they don’t want main titles, it’s that they want more commercials. They gotta make more money. They’re on the Titanic, you know, and they’re discussing the color of the curtains and what the band’s playing.”

Enter streaming services like Amazon and Netflix and the main title theme has come back with a vengeance. Take, for example, Dustin O’Halloran’s bittersweet piano opening of Transparent.

Or Jeff Beal’s noirish theme for House of Cards.

One theme in particular has wormed its way into the ears of a new generation: the theme for Stranger Things. It seems to have resonated with Emmy voters as well: On Sunday, it won the award at the Creative Arts Emmy ceremony on Sunday for Outstanding Original Main Title Theme Music. It was written by Austin-based composers Kyle Dixon and Michael Stein.

“I like the idea that they’re micro-compositions in a way,” Stein says of TV themes. “They’re supposed to be conclusive from beginning to end.”

Like The Twilight Zone, their theme wasn’t written specifically for the show. It was in a batch of demos that the composers submitted to the creators of Stranger Things.

“I would just call it like a late-night bedroom jam,” Stein says. “I almost don’t even remember its creation.”

But it stuck, the way a main theme is supposed to.

Netflix may have helped bring back the television theme, but the company also recently added a feature that lets you skip it. Kyle Dixon admits that he doesn’t really mind.

“Companies like Netflix … have analytics that tell them, Okay, everyone’s skipping the theme song. We might as well make it a button,” he says. “I know I get mad — I want to skip the theme song.”