You are at:Home»Articles»Wallabies beat Wales 29-21 in gutsy show of defence and grit to kick off spring rugby tour 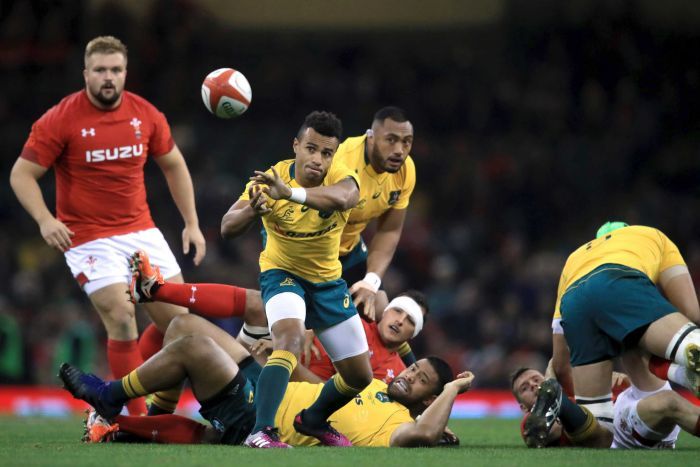 A determined Wallabies side has kicked off the UK leg of its spring tour with a 13th successive win over Wales in Cardiff.

Michael Cheika’s side ran in four tries in the 29-21 victory at the Principality Stadium in front of a crowd of more than 65,000 and will head into next Saturday’s clash against England unbeaten in its past seven matches.

With half-back pairing Will Genia, who was named man of the match, and Bernard Foley pulling the strings, the Wallabies raced into a 22-13 lead at half-time.

But they spent the majority of the second half on the back foot as a desperate Wales threw everything at a side they have not tasted victory against since 2008.

Leigh Halfpenny opened the scoring with an early penalty before Polota-Nau barrelled his way over from close range following a masterful kick to the corner from Foley.

Evans finished off a sweeping move from Wales to put his side back in front, but it was the last time they were to lead in the match as Coleman crashed over before Hooper crossed on the stroke of half-time.

Halfpenny kept his side in touching distance with a penalty after the restart and, roared on by a passionate home crowd, Wales dominated possession.

But the Wallabies held firm when under the pump and broke away for a remarkable try from Kurtley Beale, who stole the ball from the grasp of Liam Williams and raced 65 metres for a try under the posts.

Hooper was then sent to the sin bin in the 67th minute after not rolling away from the ruck, and Wales, lifted again by the crowd, pressured the Wallabies line.

However, showing magnificent defence, Chieka’s side held on with Matt Philip and Sean McMahon producing a vital hit on Alun Wyn Jones that forced the Wales stalwart to spill the ball just as he looked set to score.

Hallam Amos scored a late consolation for the Welsh, but Halfpenny was unable to add the extras as the Wallabies held on.