You are at:Home»Sports»Trump Calls on NFL Owners to Fire Players Who Protest, and Mocks Efforts to Make the Game Safer 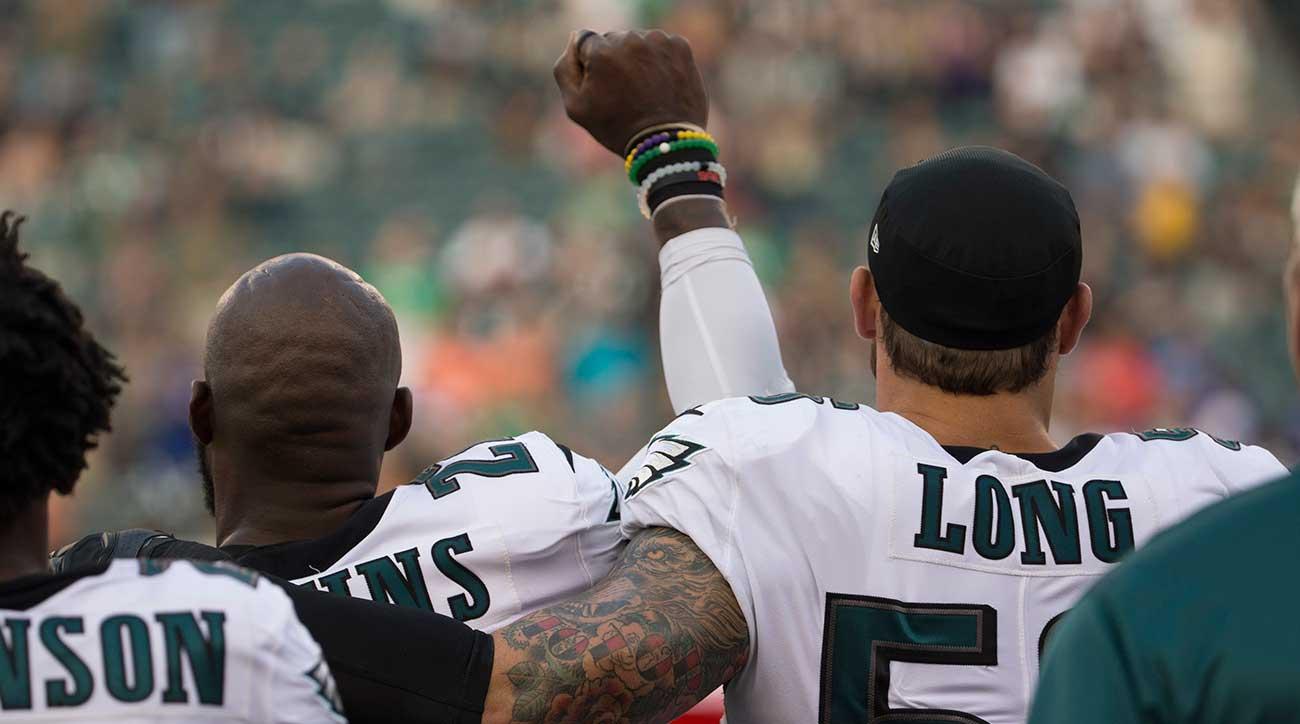 On the same day the media was filled with stories about a 27-year-old former NFL player who committed suicide and was found to have severe degenerative brain damage—likely much or all of it from football—the president decried how big hits have been taken out of the game.

In the same week Yahoo Sports broke a story that four NFL players asked commissioner Roger Goodell to declare November a month to support players’ burgeoning social activism, the president, cursing, said he would “love to see” an NFL owner fire a player who protested during the national anthem.

On these two issues the president might have the support of his core voters. But Trump’s longing-for-the-day-of-yore rhetoric in a speech in Alabama Friday night is the kind of anti-football, anti-player divisiveness that, frankly, no player or owner should stand for. Judging by the quick response Friday night and this morning, at least the players won’t.

“This union … will never back down when it comes to protecting the constitutional rights of our players as well as their safety as men who compete in a game that exposes them to great risks,” wrote the NFL Players Association’s executive director, DeMaurice Smith.

Shortly after 9 a.m. on Saturday, NFL commissioner Roger Goodell released a statement in response to Trump’s comments, saying, “The NFL and our players are at our best when we help create a sense of unity in our country and our culture. There is no better example than the amazing response from our clubs and players to the terrible natural disasters we’ve experienced over the last month. Divisive comments like these demonstrate an unfortunate lack of respect for the NFL, our great game and all of our players, and a failure to understand the overwhelming force for good our clubs and players represent in our communities.”

Regarding his nostalgia for the dangerous hits that college and pro football have been trying to take out of the game, Trump said: “Today if you hit too hard—15 yards! Throw him out of the game! They had that last week. I watched for a couple of minutes. Two guys, just really, beautiful tackle. Boom, 15 yards! The referee gets on television—his wife is sitting at home, she’s so proud of him. They’re ruining the game! They’re ruining the game. That’s what they want to do. They want to hit. They want to hit! It is hurting the game.

“But do you know what’s hurting the game more than that? When people like yourselves turn on the television and you see those players taking the knee when they’re playing our great national anthem. The only thing you could do better is if you see it, even if it’s one player, leave the stadium. I guarantee things will stop. Things will stop. Just pick up and leave. Pick up and leave. Not the same game anymore, anyway.”

Reaction was swift on Twitter. “Where was this passion in response to Charlottesville?” Broncos guard Max Garcia wrote, referring to Trump’s equivocating remarks after the white supremacist rallies in Virginia in August.

We’re in a time of player awakening. Maybe it’s not the same as Tommie Smith and John Carlos in the 1968 Olympics, but it’s real, and it’s fervent. It’s not a burn-baby-burn display of anarchy. The mild demonstrations of players such as Eagles safety Malcolm Jenkins are measured and thoughtful; Jenkins has gone on ride-alongs with Philadelphia police officers, trying to better understand their jobs. He’s appeared before Congress to appeal for criminal-justice reform.

Listen to Jenkins, earlier this month, to The MMQB:

“Most people get upset with the demonstration … I think they don’t even read or care about what it is—they just are upset at the gesture or the fact that it is during the national anthem. I try to challenge people that you should be just as upset that all of these things are happening in this country. What we are saying that this flag stands for, and justice for all, and the things in our constitution that we hold near and dear, are not being upheld. If you have true patriotism, those should be the things that get you upset and make you want to use that energy to speak out on the injustices that happen, not on the fact that somebody is using their constitutional right.”

And the president would like to see Eagles owner Jeffrey Lurie fire Malcolm Jenkins.

Now about the new rules and penalties in recent years for the big hits both pro and college football are trying to take out of the game. Trump, apparently, is the only person in America who wants to see a more dangerous game of football.

Football is under fire. It’s clearly in a crisis period, with parents all over the country either weighing whether to let their children play football or keeping them from playng tackle football entirely. Recently the Atlanta Falcons took an extraordinary step toward supporting flag football in the state of Georgia. The franchise provided seed money for flag programs to be established in all 159 counties in the state, and club officials held a clinic to teach coaches and teachers from throughout the state how to run the flag programs. The Falcons didn’t say they think youth tackle football should be banned. But these were not simply the good-neighbor actions of an enlightened franchise. The Falcons showed they’re worried about the future of football, and they’re worried that young people will simply stop playing the game if parents feel it’s too dangerous.

College football has begun to eject players for “targeting” defenseless opponents. The NFL has ratcheted up penalties and fines for hits on defenseless receivers, often angering players and coaches. But in talking to players and coaches in the last couple of years, I sense they get it. Traditional coaches roll their eyes at the crackdown on big hits, and on cutting back how often teams can hit and be physical during practice. But the vast majority understand why it’s being done. It’s being done to try to save the game.

The New York Times has reported extensively on the number of deceased former players diagnosed with CTE, chronic traumatic encephalopathy, a disease experts believe is caused by repetitive head trauma. On Thursday the paper reported that former Patriots tight end Aaron Hernandez, who last played at age 23 and committed suicide in prison this year after being convicted of murder, had “severe” CTE at the time of his death.

Trump’s remarks come at a time of intense examination of the violence of the game, at a time when its long-term future is being questioned because of the effects of head trauma. It’s not the first time he’s questioned the softening of the game. It was a particularly tone-deaf instance, however, given the news of the week.

There’s no other way to put it: On Friday night, again, Donald Trump was America’s divider-in-chief.