You are at:Home»Sports»Tottenham and Chelsea made PSG defender Thomas Meunier a priority transfer target this summer

Both Tottenham Hotspur and Chelsea made Paris Saint-Germain right-back Thomas Meunier a transfer priority during the summer window only to be knocked back by the French giants, according to reports in Belgium.

Both London clubs strengthened the right-hand side of their defence just before Thursday’s transfer deadline, with Spurs bringing in another PSG player in Serge Aurier for £23m while Chelsea signed Italy international Davide Zappacosta.

But the clubs who finished first and second in the Premier League last season both failed in their attempts to sign their number one target for that position, according to Belgium’s La Derniere Heure.

After PSG successfully convinced Dani Alves to turn down Manchester City and move to Ligue 1, Chelsea and Spurs switched their attention to the former Club Brugge defender, according to the publication. The Parisians were unwilling to sell, however, with manager Unai Emery keen to have two players available in every position.

PSG also view the Belgian as their long-term option at right-back, with 34-year-old Alves only contracted to the club until 2019. La Derniere Heure add Meunier, one of the club’s lowest earners, is now expected to be rewarded with a new deal.

Tottenham, who sold Kyle Walker to Manchester City for £50m this summer, then turned their attention to Meunier’s teammate Aurier. While PSG were not willing to discuss a deal for the Belgian, the Ligue 1 giants were happy to negotiate a fee for the Ivory Coast international who signed a five-year deal at the north London club after he was belatedly granted a work permit on the penultimate day of the summer window.

Chelsea meanwhile suffered plenty of frustration over the summer, much of that stemming from their efforts to bring in a player to challenge Victor Moses for a starting berth at right wing-back.

The Premier League champions initially attempted to sign Walker from Spurs before his move north, then turning their attention to Arsenal’s Alex Oxlade-Chamberlain. He rejected a move to Stamford Bridge, however, opting instead to sign for Liverpool where he has been promised opportunities in his preferred role in central midfield.

They finally managed to bring in a player on the final day of the window in 25-year-old Zappacosta, who joined the club for a reported fee of £25m. 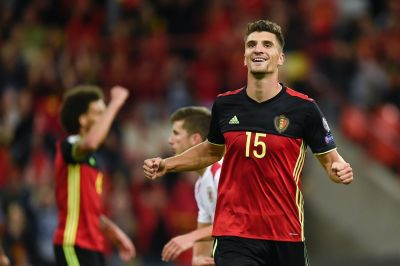