You are at:Home»Science»This Grainy Image Could Be the First British Passenger Liner Sunk by the Nazis in WW2 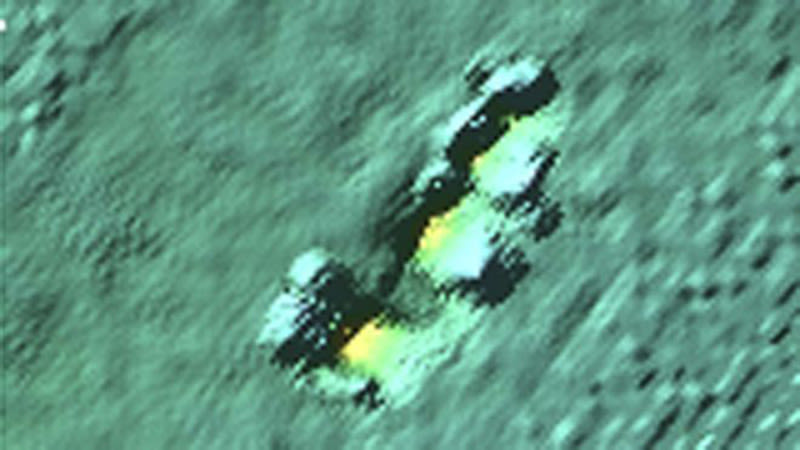 A mere eight hours after Britain declared war on the Nazis, a German torpedo struck the SS Athenia, sinking the passenger liner and killing more than 100 civilians. The ship’s final resting place has eluded shipwreck-hunters for nearly 80 years, but sonar images taken off the coast of Ireland now show what appears to be the wreck.

As the BBC reports, Geological Survey Ireland has detected what appears to be the SS Athenia, the first passenger liner sunk by the Germans in the Second World War. Shipwreck-hunter David Mearns, who analyzed the sonar scans, said he can’t be 100 percent certain that it’s Athenia, “[but]barring a photograph I can say in my expert opinion there’s a very, very high probability that that’s Athenia,” he told the BBC. “Everything fits.”

The apparent wreck is located about 650 feet (200 meters) below the surface on Rockfall Bank a few hundred kilometers off the coast of Ireland—a location consistent with historical accounts. The doomed liner was en route to Montreal by way of Glasgow with 1,103 passengers on board, of which 500 were Jewish refugees fleeing fascist persecution.

At 7:38 pm on September 3, 1939, a German sub fired a torpedo into Athenia’s port side, causing it to sink slowly by the stern. It didn’t sink for another 14 hours, finally dropping below the Atlantic’s surface at 10:40 the next morning. Many passengers managed to escape, but 117 people were killed in the incident, 28 of which were American citizens. Fearing that the United States would use the incident as an excuse to enter the war on the side of Britain and France, the Germans denied responsibility. In an early example of “fake news,” the Nazis blamed the sinking on Winston Churchill (who was appointed First Lord of the Admiralty that very day), claiming that the British had deliberately sunk its own vessel to lure America into the war.

Only later during the Nuremberg trials was it revealed that the sub’s commander, Fritz Julius Lemp, ordered the torpedos to be fired. Lemp claimed that the ship’s lights were off and steering a zigzag course, leading him to believe that the vessel was either a troopship or an armed merchant cruiser. The incident happened just eight hours after British Prime Minister Neville Chamberlain declared war on Germany in the wake of its attack on Poland.

According to Mearns’ analysis of the sonar images, Athenia is split in the aft section where the torpedo struck. Otherwise, the ship is in decent condition, sitting upright on the seafloor. Mearns says the object’s dimensions are consistent with the size of Athenia, and its resting place is very close to the coordinates described in crew’s distress signal.

From here, it should be fairly easy to confirm the identity of the object shown in the sonar image. Because the wreck isn’t very deep, a robotic sub could be used to do a survey.