From the display to the camera, here’s what’s new about Google’s updated flagships. 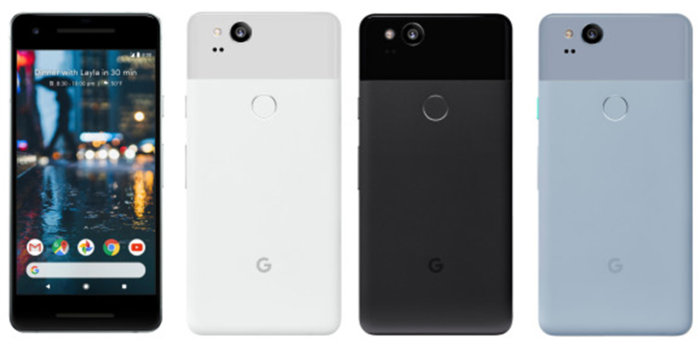 October officially belongs to Google now. Exactly a year after it took the wraps off its first fully homegrown Pixel phone, Google is back with the Pixel 2, and it’s taking it in a whole new direction.

Make that two new directions. While last year’s models were larger and smaller versions of the same phone, Google has created a bit more separation between the Pixel 2 and Pixel 2 XL. But while the two phones look a whole lot different on the outside, they still both offer the same experience.

If you were hoping for a next-generation design like the Galaxy S8 or the iPhone X, the Pixel 2 might disappoint you. The smaller Pixel closely resembles the model it’s replacing, with a 5-inch AMOLED 1920×1080 screen flanked by some pretty serious bezels. But the larger Pixel 2 XL has increased the screen size from 5.5 inches to 6 inches and considerably shrunk down the bezels. The display has a 2880×1440 resolution with a new wide-color-gamut 18:9 ratio, popularized by LG’s and Samsung’s flagship phones.

Around the back, the two phones look much like last year’s, with a two-tone glass-and-aluminum surface that encases the camera and a rear fingerprint sensor. And there’s a new colorized power button for some reason.

Inside, the two new phones are identical. Both handsets have a top-of-the-line Snapdragon 835 chip, 4GB of RAM, and 64GB or 128GB of storage.

The marquee feature of the Pixel 2 phones is a former HTC exclusive, Edge Sense. Google is calling it Active Edge, but the intent is the same: Squeeze the sides of the phone to launch Google Assistant. It’s a bit of a gimmick on the HTC U11, but it’s one that won’t bother you if you choose not to use it. It’s unclear whether Google will allow you to customize it with a different app or action, but it seems unlikely.

Last year’s Pixels notably didn’t have water resistance, but Google has rectified that this time around. Both the Pixel 2 and Pixel 2 XL have an IP67 rating, which means they can be submerged in 1 meter of water for up to a half hour. So while you probably shouldn’t take them swimming, either phone will be able to handle a dunking.

A new flavor of Android 8 Oreo

The best feature of the original Pixel phones was their OS, and it’s the same story with the Pixel 2s. Both phones feature Android 8 Oreo, which brings a redesigned Pixel Launcher and a new always-on display that will automatically show song titles as it hears them.

A new at-a-glance widget will show calendar events, traffic, or flight status at the top of your phone, and the search bar is now situated below the dock. There are also new Assistant features built into the new Pixels, such as broadcasting to Google Homes and routines. The phones will also feature a preview of Google Lens, which uses the camera to bring AI features to the world around us. For example, you can scan a dog to find out it’s breed or a flyer to save the phone number on it.

And don’t worry, all of those new AI features won’t harpoon your battery. Google says the battery in the Pixel 2 and Pixel 2 XL—2,700mAh and 3,250mAh, respectively—will get “all-day” life with super-fast charging that delivers a 7-hour charge in just 15 minutes. However, you’ll need to plug it in since its aluminum back still doesn’t support wireless charging.

Sorry, wired headphone fans, the 3.5mm headphone jack is gone on both Pixel phones. Google has followed Apple and HTC in ditching the legacy headphone jack, so if you want to use a pair of old cans, you’ll need a USB-C adapter. Thankfully, Google is supplying one in the box.

But Google hasn’t left audiophiles out in the cold. On the front of each phone you’ll find a matching pair of speaker grills above and below the screen. That’s not just for symmetry—Google has built stereo speakers into the new Pixels. There’s also a new set of earbuds, Pixel Buds, that bring touch controls, Google Assistant, and a pocket-sized charging case.

But the star of the Pixel phones is the camera. While the specs of the cameras themselves aren’t all that different than original Pixel, with a single 12MP, f/1.8 lens with 1.4μm large pixels, this year’s models do bring optical image stabilization. But as with last year, the real benefits are in the Pixels’ processing prowess.

Even without a dual camera, the Pixels have a portrait mode just like on the iPhone 8 and Note 8. It uses dual-pixel sensing technology to apply perspective to shots without the use of a second lens. And since it’s using digital processing, portrait mode is also available on the front camera. And the Pixels fuse OIS and electronic image stabilization to create even smoother, steadier shots.

Like the iPhone X, Google has optimized the Pixel 2 cameras for augmented reality with its new ARCore that brings Tango apps to all phones. Also, a series of AR “stickers” are available right in the camera app. Google says the Pixel 2s received a DxOMark score of 98 for image quality, the highest ever for a smartphone.

On both Pixel 2 phones, Google has upped the base storage to 64GB, which should be plenty for all the photos and videos you’re going to take with the new camera. Both phones also have a 128GB option at the high end, which costs $100 more.

There’s also a new $99 Daydream headset for the new Pixels with iMax movies available for free to Pixel 2 owners. Pixel Buds will cost $159 and begin shipping in November. The Pixel 2 will be available in three colors: blue, black, and white; while the Pixel 2 XL will come in black and a tuxedo-inspired black and white. The phones are available for preorder unlocked through the Google Store and exclusively through Verizon.