You are at:Home»Health»The More Women In The Operating Room, The Better It Is For Doctors And Patients

When Dr. Rosemary Kozar was applying to hospitals for her surgical residency, she made sure to skip the makeup, put on glasses and tie her hair back in a ponytail. She wanted to be taken seriously as a surgical resident, and was concerned that potential bosses would take in signifiers of femininity, like long hair or lipstick, and conclude that she wasn’t up for the job. Her idea didn’t work.

She remembers being asked during the job interviews if she was planning to get married and have children — though federal law has prohibited employers from discriminating against potential hires over pregnancy and childbirth since 1978.

“It’s physically demanding to be on your feet for many hours and work 30 hours in a row,” she said. “They thought females maybe couldn’t do it.” 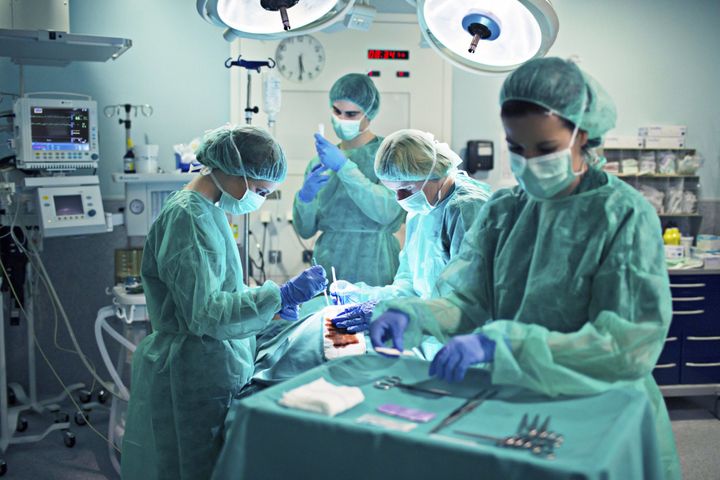 She ended up getting the job anyway, and when she became pregnant a few years later, the surgical department was extremely supportive.

That was 30 years ago, and now Kozar is a 59-year-old trauma surgeon and director of translational research at the University of Maryland R. Adams Cowley Shock Trauma Center. While a lot has changed since she was one of the first women in her residency program, she says female surgeons still have a long way to go to achieve equity in pay and leadership roles in the male-dominated field.

Kozar said that while her colleagues didn’t outright doubt her technical skills throughout her career, she did perceive a subconscious skepticism that women in general were not as committed to the physically demanding job in which a surgeon might perform an operation for hours, or be expected to come into work at the drop of a hat if their patient was failing.

And indeed, she did seriously consider quitting the profession several times, especially when she had her first child and was working over 100 hours a week. If it hadn’t been for a mentor at the hospital, who met with her weekly to touch base, she thinks she would have quit.

“It was horrible being a mom and working that many hours back then,” said Kozar, who is also the Chair of the American College of Surgeons’ Women In Surgery Committee, a mentoring network. “There were few people back then who were supportive of women, and he was one of them, and one of the reasons I stayed.”

While most of medicine has historically been a male-dominated field, surgery in particular ― and even more specifically leadership in surgical departments ― continues to be made up of mostly men. But now that women make up almost half of all medical school graduates in the U.S., and more researchers are looking into the ways women may practice medicine differently than men, there’s evidence refuting the stereotype women aren’t tough enough to be surgeons ― and even suggesting patients of female surgeons have better outcomes.

There’s no question that female surgeons are just as skilled, and perhaps even more so, than their male colleagues. A new analysis of over 100,000 surgical patients in Ontario, Canada, finds those who were operated on by female surgeons were less likely to die a month after their procedure compared to those who had male surgeons.

The findings mirror a different study published last February that found patients who saw female internal medicine doctors had slightly lower rates of death within 30 days of their initial hospitalization.

While the methodology of either paper doesn’t shed light on any potential reasons for this divide between men and women in the operating room, past studies have shown female doctors are more likely to follow medical guidelines, collaborate with colleagues, communicate better with their patients and adopt a patient-centered approach to care. And these are skills all surgeons should be striving to develop, said Dr. Christopher Wallis, lead author of the surgery study and a urology resident at the University of Toronto.

“What can we, as male surgeons, do so that every patient gets that benefit?” said Wallis. “Guideline adherence, communication, whatever it is, we want to understand the process that leads female surgeons to get better outcomes, so that a patient who is treated by any surgeon gets the best possible outcome.”

The results are also an argument for the need to bring more women into the profession and treat them equitably, said Dr. Raj Satkunasivam, a urologic surgeon at Houston Methodist Hospital who also worked on the female surgeons research.

The good news is that younger women are signing up for surgical specialties more than ever before. About 35 percent of residents specializing in general surgery were women, according to a 2015-2016 report from the Association of American Medical Colleges. What’s needed now, say Kozar, Wilson and others, is to make sure they continue ascending to positions of leadership in the field.

As more and more women sign up to learn surgical specialties, hospitals should concentrate on retention, said Dr. Niamey Wilson, chief of breast surgery at St. Francis Hospital and Medical Center in Connecticut and assistant professor of surgery at UConn.

“When you look at their careers long-term, not many women stay in the field or pursue these higher-level positions that men do,” she said. “Part of that is culture, and that is something that is going to take time to change.”

One way Wilson is helping to change the culture at her hospital is with a committee called the Physician Forum for Equity and Inclusion, which mentors female doctors to help them become leaders in their field.

“It’s not really enough to have women in the room,” Wilson said. “They also have to be looking for career advancement the same as their male counterparts are.”

Guidelines capping weekly residency shifts at 80 hours, which went into effect last July, will also play a big role in helping retain doctors regardless of gender, Kozar added, as the punishing workload of surgeons and other medical specialties harms everyone. Kozar has been heartened to see her younger colleagues, both men and women, taking time for parental leave after the birth of a child, or leaving work to catch a child’s baseball game.

She credits the next generation’s push for a healthier work-life balance for all as another factor that will help keep women in high-pressure fields.

“They’re not afraid to say, ‘I don’t want to work a thousand hours, my career doesn’t have to be my life,’” she said. “It really helped open up conversations, not just for women, but for men and women.”

CORRECTION: A previous version of this story spelled Christopher Wallis’ name incorrectly. His surname is Wallis, not Wallace.