You are at:Home»Science»The Effects of Food Wastage on Climate Change: An Interview with Gustavo Porpino

Gustavo Porpino, lead author of a study entitled the “Food Wastage Paradox”, speaks to AZoCleantech about how much food is wasted each year around the world and the drastic effects that this can have on global climate change.

AP: What are some of the key factors causing global food wastage?

GP: Food waste is the result of food surplus or failures at the end of the food chain. Sometimes food is rejected by retailers simply because it is not of perfect shape or appearance. Consumers demand the best quality and it comes with the burden of higher wastage.

Additionally, several countries, such as Brazil, do not have yet a Good Samaritan act to support food donation. When it comes to consumer behaviour, my area of expertise, food waste is more related to excessive stockpiling and over-preparation than to misunderstanding of ‘best-before-dates’.

There is a tendency to store leftovers in the fridge, but it does not mean that they will be consumed later on. Sometimes it is simply a delay-mechanism to mitigate the guilt associated with wasting food, and people do feed pets with edible food that was meant to be consumed by humans.

In a nutshell, food waste is caused not only by improper transportation, storage or handling, but also due to cultural norms such as over-preparing food to be perceived as a good provider for the family or a good host.

AP: Can you explain what is meant by the “food-waste paradox”?

GP: Until recently we thought that wasted food was an issue only in affluent families that could afford to waste food. However, our studies found evidence, both in the US and Brazil, that low-income families also waste considerable amounts of food.

Given the financial constraints faced by these households, a clear paradox is perceived. Food is seen as wealth at the base of the socio-economic pyramid, and some families don’t want to be perceived as poor.

They over-prepare staple foods, such as rice in Brazil or mac and cheese in the US, and leftovers are commonly discarded. Another aspect is an appreciation of abundance, prevalent among soul-food lovers, and Latin cultures.

AP: On average, how much food is wasted each year by households?

GP: The Natural Resources Defense Council (NRDC) points out that American families waste 35 million tons of food a year or $2,200 per household. In the UK, according to WRAP, families waste on average the equivalent to £470 a year.

In the low-income context, in Brazil, families waste mainly rice and beans. About 20% of the rice purchased ends up not being consumed. If we analyse the entire food chain, we will come up with shocking numbers.

The Food and Agriculture Organization of the United States (FAO) has warned that one-third of food produced for human consumption is lost or wasted globally, and the bad news is that this figure may be an underestimation due to difficulties in measuring household food waste.

Families, for instance, might have a composter bin to dispose of leftovers, which is a reasonable way to mitigate the environmental impact of wasted food, but the food waste itself does not decrease by composting food.

GP: According to the FAO, food waste is the third-greatest emitter of greenhouse gases after the US and China. In most countries food waste goes to landfills, and the decomposition of this organic waste produces methane, a greenhouse gas contributing to climate change.

When edible food is discarded at the end of the chain for any reason, we are losing as well every resource needed for the food production. Agriculture and livestock are intensive in technology, labour, water, soil and nutrients.

By wasting food, we are also throwing in the trash all these natural and economic resources. It means also that by saving food, we are saving biodiversity, given that uneaten food vainly utilizes land that could have been preserved.

Several counties from California are doing a good job on diverting waste from landfills and incinerators. I perceive the same tendency in Scandinavian nations. To get even better results, we should focus on behavioural change as well, and there is a lot of work to do in the context of the developing world.

AP: Can you outline the study you carried out into the cause of food wastage in households?

GP: The study is divided in two parts. First, we looked for evidence that food waste is a frequent problem among low-income families. Fourteen Brazilian families were visited, and another six mothers participated in a focus group.

We found that food waste is prevalent among these families. The sample might seem small, but the results are consistent with those we are seeing among another ten families that we are continuing to study in a different Brazilian location.

After this pilot study, we collected data in twenty low-income families in the US. Our focus on this segment is because most of the world can be classified as low-income, and for any behavioural change to be effective, we must better understand the base of the pyramid.

AP: What were the main conclusions you were able to draw from the results of your study?

GP: Interestingly, findings show that strategies used to save money – such as buying groceries in bulk, a monthly trip for a big grocery shopping, preference for supermarkets, and cooking from scratch – actually end up generating more food waste.

This mitigates the savings made during the purchasing phase, because families end up over-preparing staple foods, and leftovers are often not consumed. Some families waste leftovers simply because they prefer, for instance, to cook fresh rice on a daily basis, and others store leftovers in the fridge and forget them there.

Overall, the five major drivers of food waste that were identified were excessive purchasing, over-preparation, caring for a pet, avoidance of leftovers, and inappropriate food conservation.

AP: Are there any simple remedies to avoid mass food wastage?

GP: If we align social marketing and behavioural economics efforts it is likely that a positive impact will be reached at the consumer level. Initiatives should be targeted to educate consumers without blaming them.

If they understand, particularly in the low-income context, that food waste means money wasted, I believe it would be easier to change their behaviour in a positive manner. The Love Food Hate Waste campaign, from the UK, is a good example. 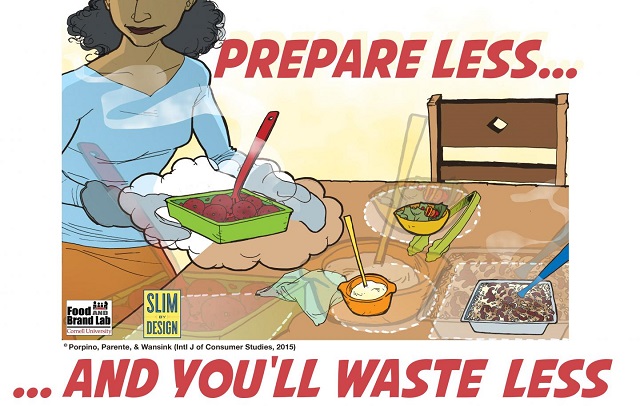 Most of the factors that lead to food waste, can be easily remedied by simple changes in food buying, preparing, and storing Image credit: Daniel Miller / Cornell University

Apart from increasing food consciousness through communications, nutritional education should be more integrated both in food stamps and food pantries initiatives. As we mentioned in the food waste-paradox study [Food Waste Paradox: Antecedents of Food Disposal in Low Income Households], some food pantries could be incremented to operate as nutrition education centers. These efforts could lead to a national plan of smarter food choices, which could also positively impact the consumption of healthier food products.

AP: Do you believe food wastage is likely to decrease in the coming years, particularly considering the global desire to prevent climate change?

GP: It depends on several economic and social factors. Increasing consumption in developing nations might translate into more food waste. Several initiatives to fight food insecurity in Brazil and India, for example, have been necessary and have acquired good results.

On the other hand, when food is more easily available, consumers might lose their awareness in relation to the value of it. In the US, I realized that some low-income families stockpile plenty of bread loaves, because it is an abundant product in food pantries. This behaviour might generate more food waste.

When I say communicate I mean an interactive approach, in which people could practice ways to save food in schools and community centers. And, of course, at the macro-level, industrialized countries should put in practice the sustainability discourse. Global leaders are aware of climate change, but are they really willing to make changes in their own backyards?

Gustavo Porpino works for the Brazilian Agricultural Research Corporation – Embrapa since 2005 and he has been a visiting scholar at Cornell Food and Brand Lab.

Gustavo holds an M.Sc. in business and he is currently on a PhD program in marketing at Getulio Vargas Foundation (Sao Paulo, Brazil). He has lived in Australia and the USA, and he is currently living in Brasília, the capital of Brazil, from where he conducts research on food consumption behaviour.

Disclaimer: The views expressed here are those of the interviewee and do not necessarily represent the views of the owner and operator of this website. This disclaimer forms part of the Terms and conditions of use of this website.