You are at:Home»Science»The big city is safer than the country, at least if you’re a goose 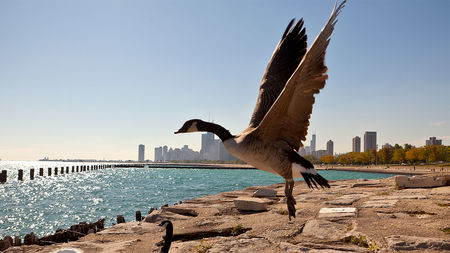 Chicago, Illinois, is a sweet home for more than just Cubs fans and blues hounds. According to a new study, the Windy City is a safe haven for migrating Canada geese, which are twice as likely to survive the winter there than geese that forage in nearby rural areas. But what’s good for the goose isn’t necessarily good for the gander: As more of these large birds overwinter in North American cities, the chance for conflicts with humans is taking off.

The Canada goose spends its summers in Canada and the northern United States and its winters in the southern United States and northern Mexico. But as the climate heats up, the geese are wintering farther and farther north. This means they don’t expend as much energy on migration. But the real boon for the birds has happened in the past 50 years or so. They’ve started moving into cities like Chicago, which are generally warmer than the countryside, studded with large lakes and parks, and safe from human hunters.

To quantify the trend—and figure out how the flocks might be affecting people—scientists attached radio transmitters to 41 adult geese in the greater Chicago area in the falls and winters of 2014–16. Ecologist Heath Hagy of the University of Illinois in Champaign and colleagues identified where the birds went and when, based on location data from the transmitters. As winter progressed, most of the geese moved from open parks to lakes and industrial zones, where it was warmer and easier to forage for food. Few geese ventured outside the city to the nearby fields, where food would have been much easier to find.

Of the birds that foraged in the country, just 48% made it through the winter. But all 35 of the city birds survived, the researchers write today in The Condor: Ornithological Applications. That’s likely because the city birds never came into contact with human hunters, who accounted for most of the bird deaths in the wild. The birds have learned that “a few people clumped together in a field during the fall are dangerous and should be avoided because they may be hunters,” says Michael Conover, who studies wildland resources at Utah State University in Logan. “But thousands of people crowded together are benign and can be ignored.”

That lesson may be reflected in the bird’s behavior: About 70% of the tagged geese returned to Chicago before the fall hunting season started, and 85% never left the city once the season opened in mid-October “Temperate breeding Canada geese are incredibly adaptable,” Hagy says.

But can city-dwelling humans adapt back? Geese in cities spread disease and sometimes get aggressive toward humans. The crash landing of a US Airways flight on the Hudson River in New York City in 2009 minutes after takeoff was thanks to a flock of geese hitting the plane. And the problems are likely to get worse. “We have seen an increase of geese in many urban areas during the last several decades and it is certainly possible that the trend will continue,” Hagy says.

That means that wildlife managers need to start thinking now about new ways to reduce human-bird conflicts in urban areas, says Madhusudan Katti, an ecologist at North Carolina State University in Raleigh, who was not involved in the study. Now, most use fences, hunting, and even different forms of “harassment.” “But they may have to get even more creative if geese are preferring urban habitats more than expected.”