You are at:Home»Tech»The best travel tripod

This post was done in partnership with The Wirecutter, a buyer’s guide to the best technology. When readers choose to buy The Wirecutter’s independently chosen editorial picks, it may earn affiliate commissions that support its work. Read the full article here.

For less than $200, the MeFoto RoadTrip Travel Tripod is the best travel tripod for people who need to stow one in a carry-on bag for the flight home or easily strap one to a backpack for a multiday hike. Among the current crop of travel tripods, the MeFoto RoadTrip collapses smaller and weighs a bit less than most of the competition (when collapsed, it’s a bit longer than a standard folded umbrella) but maintains a height and load capacity that are on a par with those of a full-size tripod—and at a competitive price.

A travel tripod is essentially any tripod that collapses down small enough to be easily carried attached to a hiking bag or inside a carry-on suitcase. They’re smaller and lighter than their full-size brethren, and though they might not be quite as stable or have as many extra features as a bigger model, they make up for that in portability. For our purposes, it ought to be able to hold up the sort of gear the average user might bring while traveling or backpacking: a midrange DSLR and a zoom lens. 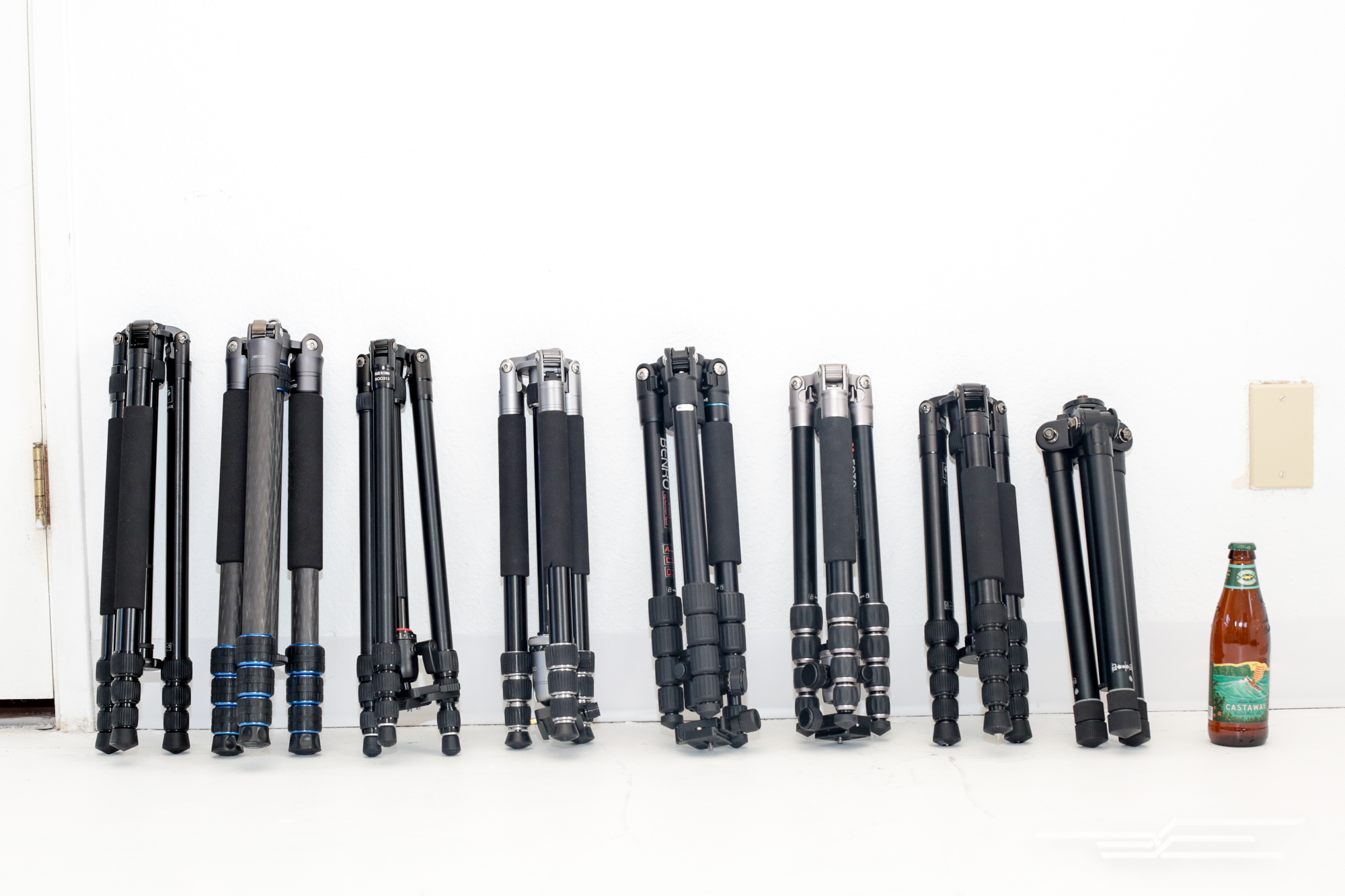 The first step of paring the dozens of nearly identical travel tripods that flood that market was research. We read lots of tripod reviews from actual users, scanned forum posts to determine what features were important, and talked with a number of experts. Eventually, we decided that the best travel tripods are less than 20 inches in length, weigh less than 4 pounds, have at least a 6-pound weight capacity, and were made of aluminum. We also prefered tripods that come with ball head mounts, which are smaller and easier to adjust than other types of heads.

We eventually settled on eight models to test, and used them while travelling around Hawaii. We took them hiking, onto a wet, slippery boat for some whale watching, and to the beach, making note of what features and criteria were important for real-world use. The MeFoto RoadTrip Travel Tripod is the best travel tripod for your next excursion. It is lighter and can collapse smaller and more easily than most of the competition. It includes a ball head mount and comes in 12 bright colors. The MeFoto collapses down to a nifty 15.4 inches, weighs just 3.6 pounds and can expand to 61.6 inches with the center column extended. It’s rated for a load capacity of 17.6 pounds. You can also twist one leg off to quickly convert it to a monopod with a thick grip padding, and can attach optional spiked feet for use in slippery conditions. The RoadTrip also has a center column hook for hanging weight to increase stability.

As with everything, the MeFoto isn’t quite perfect—but many of the downsides are concessions that you have to make due to it being small enough to easily take traveling. This won’t be the tallest tripod you’ve used and it won’t hold your longest telephoto on your heaviest DSLR, but you’re sacrificing a bit of height and load capacity for portability. We also wish that the MeFoto had a slightly larger center column hook. The Dolica LX600B502DS is our runner-up, and is a good pick if you can find it on the cheap and don’t mind it being just a little bit bigger than the MeFoto. It’s quite similar to the MeFoto (and exactly the same weight), but our top pick pulled ahead by offering an extra 1.6 inches in height. The MeFoto also collapses down to be more than an inch smaller than the Dolica. An inch may not seem like much, but it’s helpful when packing the tripod into a bag. Like our top pick, the Dolica can hold a load capacity on a par with full-size tripods.

We actually preferred the Dolica’s leg lock mechanism over the MeFoto’s, because it was simpler to lock into place, and the Dolica does offer a center column hook that’s easier for sausage fingers to access. The Dolica also had grip on each leg, rather than just on one with the MeFoto, but they don’t feel quite as high-quality as the MeFoto’s.

If you’re looking to spend less than $100, the Dolica LA600 Pro is only 1 inch longer than our main pick when collapsed and a tiny bit heavier, but it lacks many of the extra features and functionality that we like from the MeFoto RoadTrip. This budget tripod squeezed down to 16.5 inches, weighs 3.75 pounds, has a maximum height of 60 inches, and 15-pound maximum weight support. Combine that with the inclusion of a gear hook for stability, and you have a competently specced affordable travel tripod.

But it’s missing features that we think are critical: It uses the more-bulky flip locks, rather than sleeker and smaller twist versions, you can’t remove the center column for use as a monopod, and it won’t let you convert the feet to spikes for working in extra-slippery conditions.

We recommend the MeFoto BackPacker Air—a step down from the RoadTrip—if you value a tripod that emphasizes portability and simplicity over stability and fine-grained control. The BackPacker Air weighs about a pound and a half less than our top pick (2 pounds versus 3.6 pounds), collapses to just 10.4 inches when folded, and has a center column that converts into a selfie stick with a spring-loaded phone mount and a Bluetooth remote control. It’s not quite as tall as the MeFoto RoadTrip, but it still has some important features such as a reversible center column with a hook and a ball head mount. The BackPacker Air has a much lower maximum load weight (8.8 pounds versus 17.6 pounds for the MeFoto RoadTrip), and is also trickier to adjust than our top pick. It’s also missing some of the bells and whistles found on our top pick, such as a monopod or spiked feet.

One very different option to a traditional travel tripod is the popular GorillaPod line from Joby. These tripods can handle everything from a smartphone to a medium-size mirrorless camera to a full-size DSLR with heavy lens. Rather than having legs that lock into place, the GorillaPod has flexible limbs that can be wrapped around a nearby pole or tree, or anything that’s handy really. They’re small, affordable, and ideal for use with smartphones or lighter cameras, but they don’t provide nearly as much stabilization or any of the features found in our top pick.

This guide may have been updated by The Wirecutter. To see the current recommendation, please go here.

Note from The Wirecutter: When readers choose to buy our independently chosen editorial picks, we may earn affiliate commissions that support our work.