You are at:Home»Tech»Tesla Semi Mule Spied in Motion, Going Ludicrous on Cargo Trailer
There has been a lot of noise surrounding Tesla’s imminent presentation of its first commercial vehicle – and pretty much the first in the world of its kind: a battery-powered semi truck.

23 photos
While things have been going from bad to worse on the company’s side with the event suffering not one, but two postponements (first to October 26 and then to November 16), not the same can be said about the activity of wannabe spy photographers.

First, a prototype of the Tesla Semi was snapped while sitting on top of a trailer in one of the company’s known testing areas, revealing much of its design and also offering plenty of scale comparison opportunities.

Based on that picture and the teaser image released by Tesla a few months ago, a digital artist recreated the truck in high definition so we could all get a better look at it while we wait for November 16 to come. Yes, this is still a concept, but knowing Tesla, it should be at least 90 percent ready.

Finally, somebody now appears to have come across a test mule of the all-electric truck and had the sleight of hand to draw their phone out and film the encounter. Bear in mind this is still a speculation, but all the signs point toward the vehicle in the clip being a Tesla Semi in disguise.

First of all, the same tractor we see here appears in the prototype image as well. It sits parked to the left, with its front end turned away. Look for the funny-looking box behind the cabin, and you should have no problem spotting it.

Second, there’s absolutely no engine sound. A diesel truck setting off would have to spool its engine quite hard, which would have been captured on the microphone. Sure, tinkering with the sound isn’t rocket science and there have been others who tried to fool us, but this one looks legit.

Thirdly, there are no visible exhaust pipes or fumes. Let’s say they could have been hidden under the truck or on its far side for some reason, but that would be an odd design choice.

Fourthly, this thing certainly looks like a mule. It has a pretty standard front end, but it all goes awry once the cabin ends. There’s that boxy thing that seems to be wrapped in loose plastic, with the same material covering the lower side as well. Actually, that’s a bit patchy even for a mule.

Finally – and this, together with the vehicle’s presence in the initial picture is the most telling – look at the way it pulls away. We can’t know whether the trailer was loaded or not, but if it were a diesel truck not only would it have accelerated more slowly, but there would have also been some jerking from the gear shifts. Instead, what can almost definitely be called the “Tesla Semi mule” accelerates smoothly and quite vigorously.

Musk did say the preliminary tests have yielded better results than expected and he even went as far as calling the Semi a “beast.” He also confirmed there was a finished prototype but refused to offer any straight answer regarding its design. Like it or not, he’ll have to be a lot less bashful on November 16 when he’ll hopefully host the unveiling event. 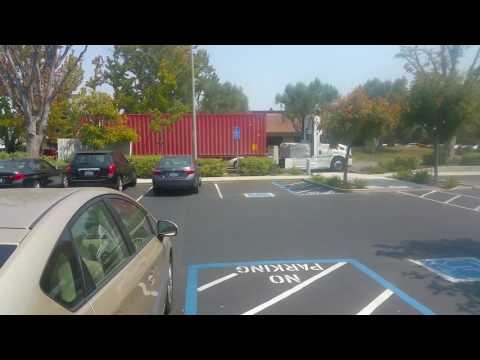