You are at:Home»Tech»Tamagotchi Returns: Our Week With Bandai Namco’s New, Classic Virtual Pet

The original Tamagotchi was to ’90s kids what the pet rock was to their parents: Something pointless but addictive to dote on, because everybody likes to feel needed. Now Bandai Namco is re-releasing a reasonable facsimile of the original Tamagotchi-out in the US Nov. 5-and we spent five full days feeding one, cleaning up its feces, and feeling somewhat overwhelmed by its regular beeping.

The new Tamagotchi may look like the ’90s original, but it’s significantly smaller and, surprisingly, it actually has fewer features. Yes, the new Tamagotchi does less than the original; but did it really lose anything?

My memories of the original Tamagotchi are hazy, besides the time I left it at home during a family vacation and came back to a tombstone. Reading the wikia entry, I barely remember most of these features. Medicine? A “discipline” meter? Stats? Lame “games” like guessing which direction the little creature was going to look?

The new Tamagotchi, although it sports the classic look of the original, pares the pocket monster down to its most essential essences: It beeps, you feed it, you clean up its poop, it dies. Its a bare-bones Pavlovian keychain that asks very little, and returns just enough to keep you ever so slightly invested. And honestly, that’s fine with me.

“We’re targeting your generation, who are online and [lead]crazy busy lives,” she said. “It allows you to kind of relive it, but in a more simplistic way.”

We only have so much to give, and Bandai Namco wants to slip these into whatever tiny pockets of spare time and attention we may have left.

So how much does the new, classic Tamagotchi really demand? I spent the last five days trying to keep it alive during New York Comic Con, and to save myself time later-busy millennial that I am-I kept a journal of the experience.

I met with Bandai Namco today about the new Tamagotchi, and they let me choose one of the six designs to keep. The white and black one looks best, but I chose the translucent blue one because it’s the same one I had as a kid.

I pried open the plastic and pulled the battery tab as soon as I left the meeting. The egg that appeared on the tiny, primitive screen looked familiar. I read the instructions. I set the time wrong because I’m in New York, not LA, but it’s too late to fix it now. I’m at Comic Con, and I have nothing on me sharp and small enough to press the reset button.

The instructions reminded me that it can die. Not just can, but will-eventually, of old age. This gives me something to think about.

It fell asleep around 8pm. I turned out the lights. 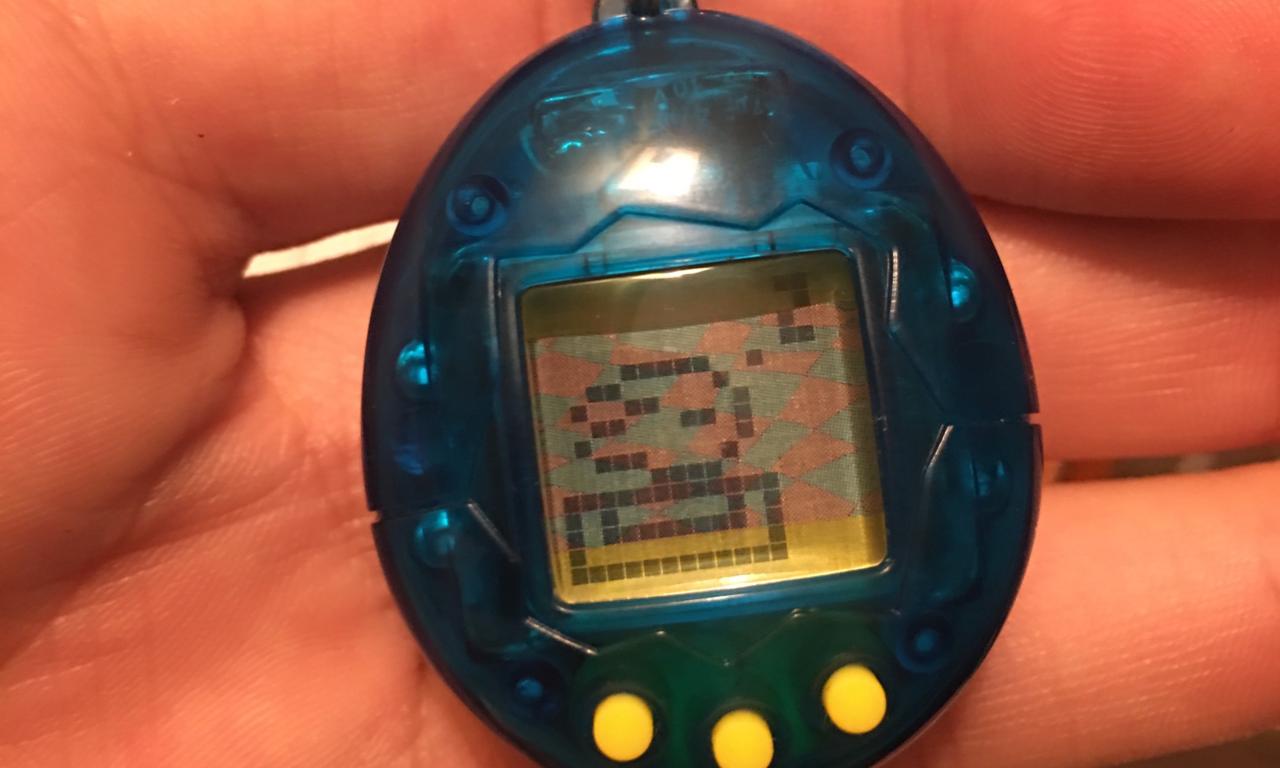 The Tamagotchi woke up before I did. It was already hungry, and in a bad mood (you can tell the difference based on the icon emitted from its head). It beeped loudly-surprisingly loudly! Is there no way to turn off the beeping? I don’t have time to read the instructions now. I have to run. Hopefully it doesn’t beep in the middle of an interview.

I check in with it throughout the day. Am I starting to grow attached, or is that my imagination? Do I just want that to be true?

My baby grew up under my very nose (literally-it’s clipped to my Comic Con badge). I didn’t even notice the moment it transformed from a weird head thing to an ever weirder puffy-lipped snake person. I feel like a neglectful parent.

It’s 10pm. My monster is still awake. I just swiped the feces off the screen and fed it. Does he stay up later now that he’s an adult? Is he out all night exploring his weird snake body? Am I a bad parent? How do I turn this thing off?

I slept in on Saturday. My monster did not wake me.

I’m starting to get used to this. Roughly once an hour, for about 12 hours a day, it needs a meal, a morsel of candy, to have its mess cleaned up, or all three. It’s simple to navigate with only three buttons, despite the lack of icons due to the smaller screen. I always know what it wants. It beeps during quiet Comic Con panels, but nobody seems to notice. Everything beeps these days.

I took it into a movie, vaguely worried about the noise. It didn’t make a peep for hours-or maybe I just didn’t notice. 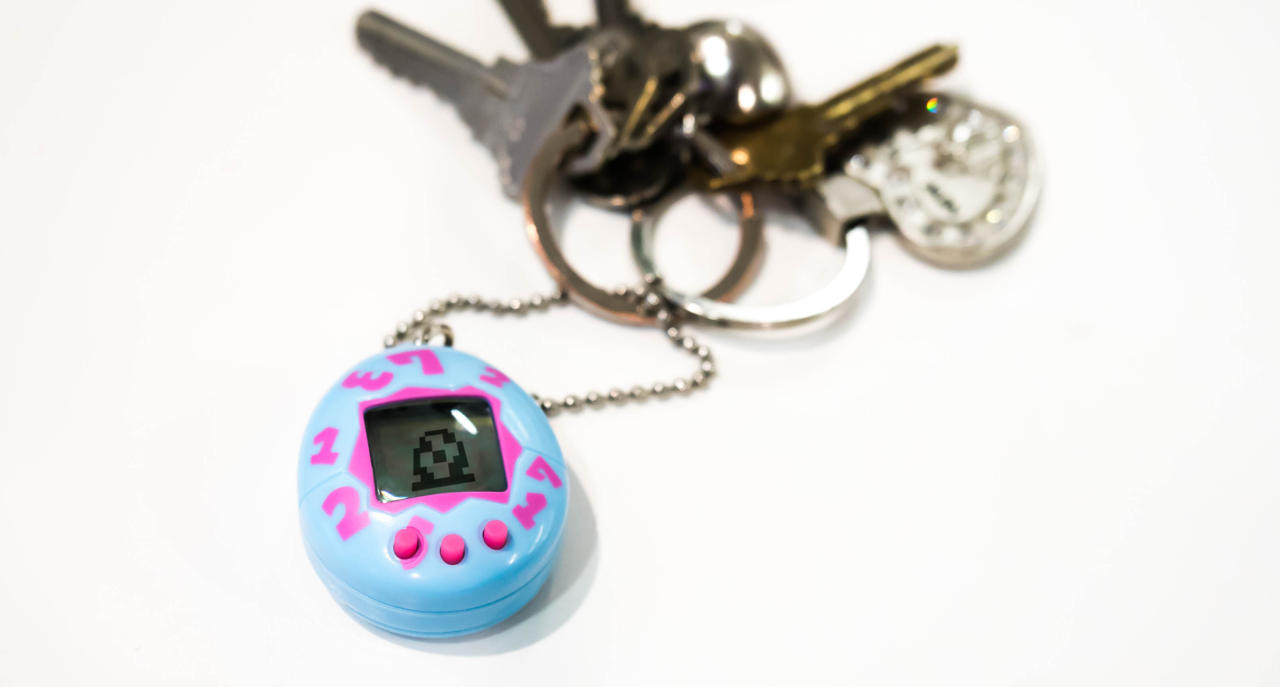 Today is a travel day. I check out of my hotel, leaving my bags with the front desk. The Tama stays clipped to my badge, bumping against my stomach with every step.

I feed it and check in on it throughout the day. Sometimes I hear the beeping, sometimes I don’t; I press the button either way and see what-or whether-it wants. The routine is set.

What am I getting from this? On one hand, my Tama is another distraction in a world already filled with far too many. I’m already carrying a phone, a laptop, a Nintendo Switch. They all beep at me, audibly or not.

But there is something undeniably fulfilling, however inconsequentially, about watching the little idiot slither around its screen, happy as a tiny, digital, absurdly simplistic clam.

As a kid, I got way too attached to this thing. I still remember crying and beating my fists the first time I let it die. I didn’t expect to feel that again, and I don’t. Thank goodness.

At the airport, I stick it in my bag. Then I forget about it.

Very few things in life feel better than waking up in your own bed again after a trip, especially one for work and not pleasure. Maybe that’s why I forgot about my Tamagotchi until late into the afternoon. Maybe it was jetlag. Or maybe I really am a neglective Tama-parent.

I sat down to finish writing this, cracked my knuckles, and felt the lightning strike realization: It’s been in my bag, ignored, since yesterday.

I dash for it and dig through the trip’s detritus to fish it out of the bag’s deepest corners.

Three poops. A big, scary skull in the corner. Is it dead? I can barely see it-he’s been pushed off the edge of the screen, marginalized by his own mess. I press a button, and the feces disappears. A few more, and it’s fed. The skull fades. There are no meters or stats in this version, so if it’s fed and clean, it’s happy. Back to normal, then, and still slithering for now.

Had it beeped at me throughout the day? That reminds me-wasn’t I going to find out if I can mute it? I press random combinations of the Tamagotchi’s three buttons until I hit on it: Hold one, then press the other, and a big “ON/OFF” toggle appears.

Yes, I can mute it, silencing its beeps. But, surprising even myself, I don’t.

The new Tamagotchis will hit a variety of retail stores starting Nov. 5 in what Bandai Namco claims will be a limited initial run, and sell for $14.99 each. They’re available for pre-order starting today.