You are at:Home»Science»Spin-current generation gets mid-infrared boost with plasmonic metamaterial 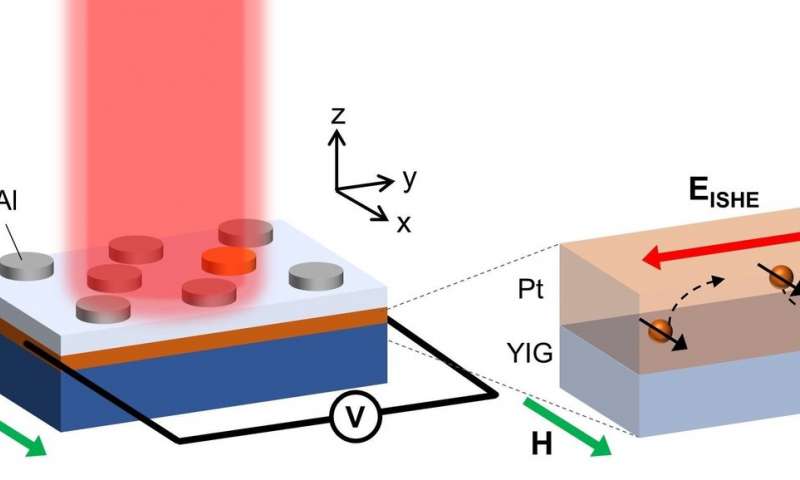 Recently, researchers have begun to use metamaterials, engineered composites that have unique properties not found in nature, to enhance the absorption rates of plasmonic absorbers. These properties include the size, shape and arrangement of the nanoparticles that manipulate electromagnetic waves, absorbed as light, to achieve what is impossible with conventional materials.

Researchers in Japan used a trilayered metamaterial to develop a wavelength-selective plasmonic metamaterial absorber (PMA) on top of a spintronic device to enhance the generation of spin currents from the heat produced in the mid-infrared regime.

The research, which could be incorporated in a range of applications from thermophotovoltaics and ultrathin film solar cells to light and thermal detectors, is reported this week in APL Photonics.

“Our work is the first to combine mid-infrared plasmonic metamaterials with spintronic devices. This unique combination enables stronger light absorption and shows the excellent tenability of these metamaterials’ resonance wavelengths,” said Satoshi Ishii, a researcher at the National Institute for Materials Science and co-author of the paper.

The team in Japan showed that a spin current can be generated directly from the absorbed photons in the Pt film, a paramagnetic metal, that is placed over YIG, which is a magnetic insulator. Because light is confined in the subwavelength regime in the PMA, electromagnetic fields are strongly enhanced before the light is absorbed. After light is absorbed by the Pt film, it generates heat, which is also enhanced by the PMA.

In other words, when incident light hits the device in the mid-infrared range, the PMA exhibits a strong plasmonic resonance, which maximizes the absorption. A fraction of the absorbed light partially triggers the photo-spin-voltaic (PSV) effect in the Pt/YIG spintronic device, a relatively new method for directly generating spin currents via photons in a nonmagnetic metal layered with a magnetic insulator. The remaining light heats up the device to produce a thermal gradient across the magnetic material thickness, which in turn induces a thermally generated spin voltage in what is called the longitudinal spin Seebeck effect (LSSE).

“In short, owing to the plasmonic metamaterial absorber,” said Ken-ichi Uchida, another NIMS researcher and co-author of the paper, “the device allows the electrical detection of a specific wavelength through the PSV effect and the LSSE.”