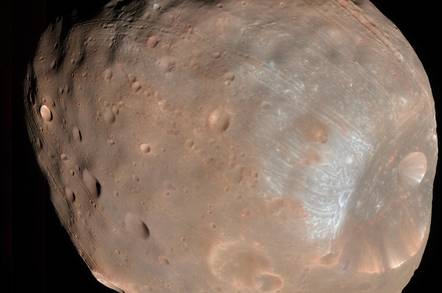 Vid Strong solar eruptions may be blasting the Martian moon Phobos with an avalanche of electrically charged particles, charging parts of it to hundreds of volts, and hampering attempts to land on and study the alien landscape.

Interest in human spaceflight to Mars has ramped up as scientists keep finding promising signs that the Red Planet may have once harbored life – and Elon Musk really wants people to go out there and die for him on the unforgiving dust world. Some have considered Phobos as a possible base for humans to settle first because its weak gravity would make landing easy.

Once a base is set up on the moon, astronauts could potentially control robot rovers on Mars from Phobos, which is more convenient, in terms of radio communications and latency, than controlling the device all the way back here, on Earth.

But a new study, published in the journal Advances in Space Research this month, shows that this approach could be trickier than previously thought.

William Farrell, lead author of the paper and a researcher at NASA’s Goddard Space Flight Center, said: “We found that astronauts or rovers could accumulate significant electric charges when traversing the night side of Phobos – the side facing Mars during the Martian day.”

Farrell said the charges probably aren’t high enough to injure an astronaut, but could affect sensitive machinery and sensors. “We would need to design spacesuits and equipment that minimizes any charging hazard,” he added.

Both of Mars’ moons, Phobos and Deimos, have no atmosphere to shield whoever and whatever is on the surface from being bombarded by heavy doses of ions, electrons and electromagnetic radiation from the Sun.

“The electrons act like fighter jets – they are able to turn quickly around an obstacle – and the ions are like big, heavy bombers – they change direction slowly,” said Farrell. “This means the light electrons push in ahead of the heavy ions and the resulting electric field forces the ions into the plasma void behind Phobos, according to our models.”

The study shows that this plasma void behind Phobos may create a situation where astronauts and rovers build up significant electric charges. For example, if astronauts were to walk across the night-side surface, friction could transfer charge from the dust and rock on the surface to their spacesuits. This dust and rock is a very poor conductor of electricity, so the charge can’t flow back easily into the surface – and charge starts to build up on the spacesuits.

On the day side, the electrically conducting solar wind and solar ultraviolet radiation can remove the excess charge on the suit. But, on the night side, the ion and electron densities in the trailing plasma void are so low they cannot compensate or “dissipate” the charge build-up.

Calculations show that the static charge can reach up to ten thousand volts in some materials. If an astronaut touches a conductive object, it could release the charge and sending a shock to electronic equipment, potentially frying its chips – as anyone who has not used a static strap while repairing a motherboard may recognize.

The researchers calculated the buildup of charge on the dark side of Phobos in regions such as the Stickney crater, the largest crater on the moon.

“We found that excess charge builds up in these regions during all solar wind conditions, but the charging effect was especially severe in the wake of solar eruptions like coronal mass ejections, which are dense, fast gusts of solar wind,” said Farrell.

If you end up on a flight to Mars, we here on the Reg science desk truly hope you know watt you’re getting yourself into. ®