You are at:Home»Sports»President Trump: Golden State Warriors not welcome at White House 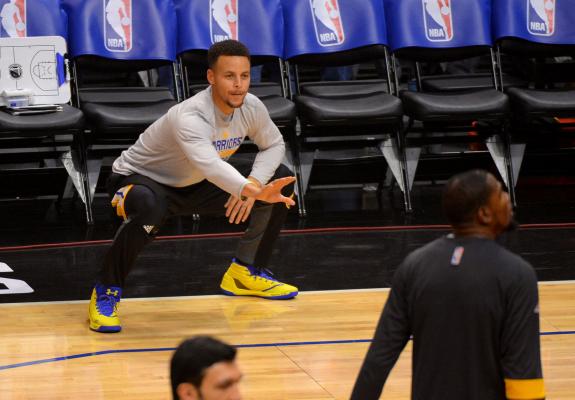 President Donald Trump says the Golden State Warriors are not welcome to the White House to celebrate their 2017 NBA championship.

Following his criticism of the NFL at a political rally on Friday night for allowing players to protest during the national anthem, Trump rescinded any invitation coming to the Warriors to visit the White House.

“Going to the White House is considered a great honor for a championship team. Stephen Curry is hesitating, therefore invitation is withdrawn!” Trump tweeted Saturday morning.

The Warriors beat the Cleveland Cavaliers in five games to win their second championship in three seasons. There was no previous indication of an official White House invitation for the Warriors, and ESPN reported Thursday night that the NBA had been in communication with the Trump administration on the matter. An invitation was expected to be extended if the team decided as a group to attend.

Warriors coach Steve Kerr told ESPN earlier this week that the team was planning to meet to discuss a potential White House visit but did not say when that discussion would happen.

Kerr and several Warriors players, including stars Kevin Durant and Stephen Curry, have criticized Trump’s actions during the campaign and in office. The Warriors visited President Barack Obama in early 2016 after winning the 2015 Finals.

Curry said Friday he would vote no if the team were invited to the White House. Durant previously said he would not go either.

Curry, a two-time MVP, was forceful in his stance at Warriors media day in Oakland on Friday.

“I don’t want to go,” Curry told reporters. “That’s kind of the nucleus of my belief. … (But) it’s not just me going to the White House. If it was, this would be a pretty short conversation.”

Curry elaborated when asked what his intended message would be to skip the event.

“That we don’t stand for basically what our President has — the things that he’s said and the things that he hasn’t said in the right times, that we won’t stand for it,” Curry said. “And by acting and not going, hopefully that will inspire some change when it comes to what we tolerate in this country and what is accepted and what we turn a blind eye to. It’s not just the act of not going there. There are things you have to do on the back end to actually push that message into motion.

“(Athletes are) all trying to do what we can. We’re using our platforms, using our opportunities to shed light on that, so that’s kind of where I stand on it. I don’t think us not going to the White House is going to miraculously make everything better, but this is my opportunity to voice that.”

Kerr earlier confirmed to ESPN that an invitation had not been extended by the White House. He said he had several conversations with Durant, Curry and other team leaders about the situation throughout the summer.

“I’ve talked to a couple of them about it,” Kerr told ESPN. “There are a lot of different dynamics to this and different viewpoints. We’ve got players from all over the world and all over the country, and they’re going to have different perspectives, so I think it’s important for us all to get in a room and hash it out and decide what we want to do.

Durant, the Finals MVP, said last month he does not want to celebrate the team’s title at the White House with Trump.

“Nah, I won’t do that,” Durant told ESPN. “I don’t respect who’s in office right now. I don’t agree with what he agrees with, so my voice is going to be heard by not doing that. That’s just me personally, but if I know my guys well enough, they’ll all agree with me.”

Since taking office in January, Trump has hosted the Super Bowl champion New England Patriots and members of the World Series champion Chicago Cubs to honor their titles.