You are at:Home»Articles»Planet of the Apes: Last Frontier is like Heavy Rain but with apes

Survival of the fittest.

Somewhere in the Midwestern United States, apes overlook a ranch in a moonlit valley. I’m hunting for food, and the cattle grazing below look mighty tasty. But there’s a catch: they belong to a group of armed, territorial humans. My father told me not to hunt in this part of the valley and stay hidden in the mountains, but my brash older brother is convinced this is the best way to feed the tribe. I protest, but it’s no good. The apes descend into the valley and all hell breaks loose. I spot a human and, without thinking, shoot him dead. Another tries to escape on horseback, and my brother shoots him too. We won’t go hungry tonight, that’s for sure, but we’ve just triggered a bitter war between humans and apes—the foundation of the story in Last Frontier.

Developed by London-based Imaginati Studios, in association with Andy Serkis’ production company Imaginarium (I know, it’s confusing), Last Frontier is a three-hour interactive story set between the events of the films Dawn of and War for the Planet of the Apes. It’s a standalone game with a branching storyline and eight endings, and Imaginati CEO Martin Alltimes tells me that most, if not all, of the main characters can die, which should make for some tense moments of drama. He cites David Cage’s preposterous serial killer yarn Heavy Rain as the studio’s biggest inspiration—although hopefully the writing is better. And it’s a game that has been designed with accessibility firmly in mind, meaning pretty much anyone can play it and enjoy the story. 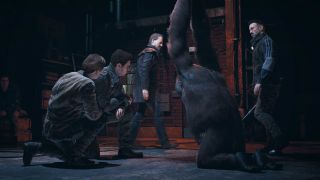 In another scene, this time from a human perspective, an ape is tied up and being savagely beaten in a barn. Retaliation, perhaps, for the attack on the ranch. You can choose to intervene and stop the beating, but the opinion of some of your allies will drop. Or you can sit back and watch the poor guy get smacked around in the hope it might spill some intel about where his friends are. Managing reputations is an important part of the game, and every choice is given added weight by how the people around you will react to it—positively and negatively. I choose to stop the interrogation, because I’m Team Ape, but it doesn’t go down well. I’m sure that’ll bite me in the ass later.

When it’s time to make a decision—like, say, aggressively attacking the ranch or trying to take the cattle quietly—the game pauses. This gives Last Frontier a very different rhythm to something like a Telltale game, where you rarely get a chance to think about a choice before you make it. I wonder if this’ll strip some of the urgency from the game, as spontaneous decision-making is one of the main reasons games like The Walking Dead are so compelling. But Imaginati has made a conscious decision to step away from that formula, even going so far as to remove any kind of exploration or navigation. 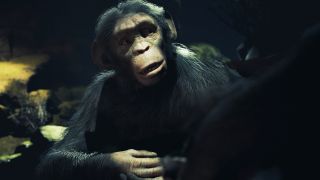 There’s no walking around looking for items or talking to characters here. Instead you’re ferried automatically from one scene to the next, which is a fairly bold move. In other narrative games these are the only moments where you feel like you have some direct control over your character. Without them I wonder how it’ll manage to feel like more than just a procession of cutscenes. There are action scenes with quick time events to mix things up, but the timing will be more forgiving than in a lot of other games. Ultimately, story is everything in Last Frontier, and Imaginati is promising a variety of paths to take on the journey towards its multiple endings. You can win the war for either side, or you can try and broker peace between the two factions.

Multiplayer is another reason why the game pauses at key decision points. Play with a pal and you’ll have to vote on which path to take, which will likely cause some heated arguments. I like this feature, although it’ll have limited appeal to anyone who plays PC games exclusively at their desk. It’s clearly been designed with couch play in mind, so it might be worth dusting off your Steam Link. The scenes I played were too brief to get a sense of how everything will come together in Last Frontier. I’m hoping the story is as malleable as has been suggested, and by the end I feel like I’ve made some kind of meaningful impact on the story. And I’ll be making sure the apes win the war.