You are at:Home»U.S»Nobody Takes The Bodega Out Of The Corner. Not Even A Startup 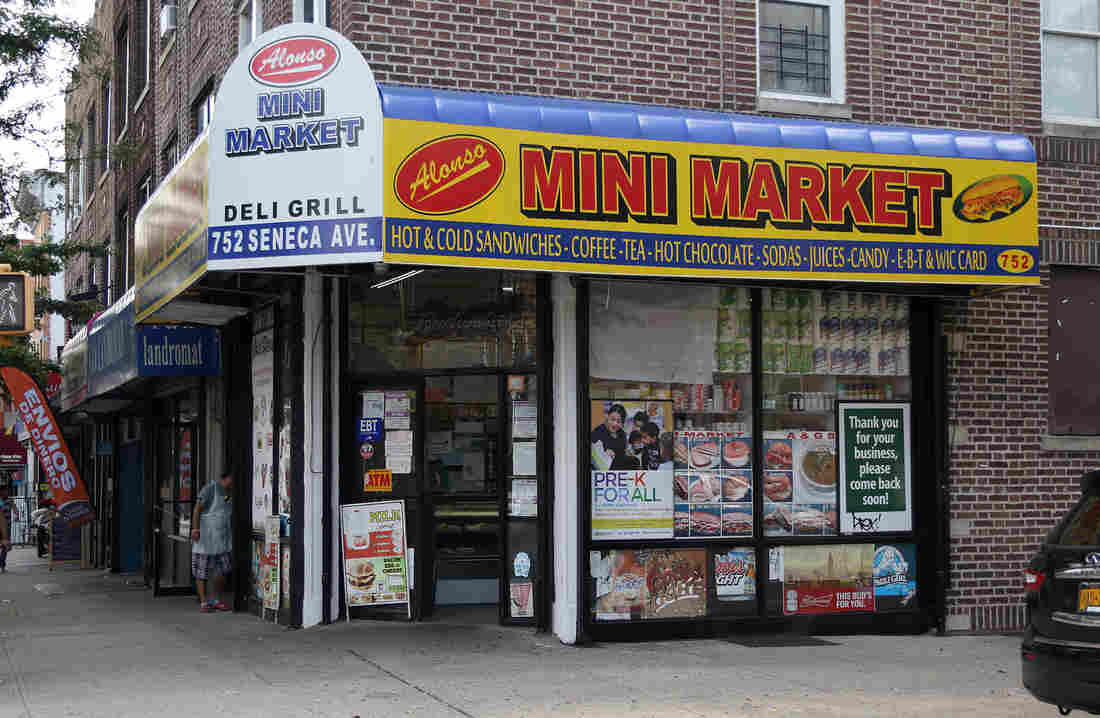 Mini Market is a bodega in Ridgewood, Queens, that sits on the corner of Seneca Avenue and Woodbine Street. Writer Angely Mercado says these stores aren’t just about convenience — they feed the spirit of a community.

Mini Market is a bodega in Ridgewood, Queens, that sits on the corner of Seneca Avenue and Woodbine Street. Writer Angely Mercado says these stores aren’t just about convenience — they feed the spirit of a community.

When the word “bodega” began to trend all over Twitter this week, I wondered whether something bad had happened in one those beloved, big-city neighborhood corner stores.

You see, I grew up with bodegas. I don’t remember a time when a lot of the corner stores in my neighborhood of Ridgewood, Queens, weren’t a fixture in my life, as ever-present as my mom’s platano dishes and savory bean stews or my dad’s Puerto Rican folklore. Even now, as an adult who still lives in the same neighborhood, I constantly go to corner stores, whether it’s for a bottle of seltzer or a late-snack of spicy takis.

So when I saw that “bodega” was trending, I wondered whether some moneyed, hipster transplant had set up a bar in an immigrant neighborhood and insensitively named it “Bodega.” It was worse.

It turned out that two ex-Google employees wanted to work on a startup named “Bodega.” Their logo was a cat, not unlike the actual corner store cats — with names like Tito — that sleep on the newspapers or bags of bread. Except their concept was essentially a glorified vending machine that would be placed inside gyms and lobbies. There would be no bodega cat, no bodegero playing lewd bachata over his speakers, no loosies (cigarettes sold individually) and no Caribbean coconut candies. Just an unmanned pantry box filled with bougie products that customers would pay for through an app connected to their credit cards. Their aim, as one headline put it, was to make the traditional corner store “obsolete.”

I laughed. And then I read a description in a news article in which the founders said they wanted to eliminate the hassle of human interaction. But I don’t go to bodegas just for the convenience. Sometimes I go for a pack of gum and end up standing at the counter for more than 15 minutes, just chatting with the guy manning the cash register who knows my dad and always says “hi” when I come in. I go because his brother — whom everyone has nicknamed “Rubio,” because he is the “light-skinned one” — is hilarious. I go because they’re part of my community. 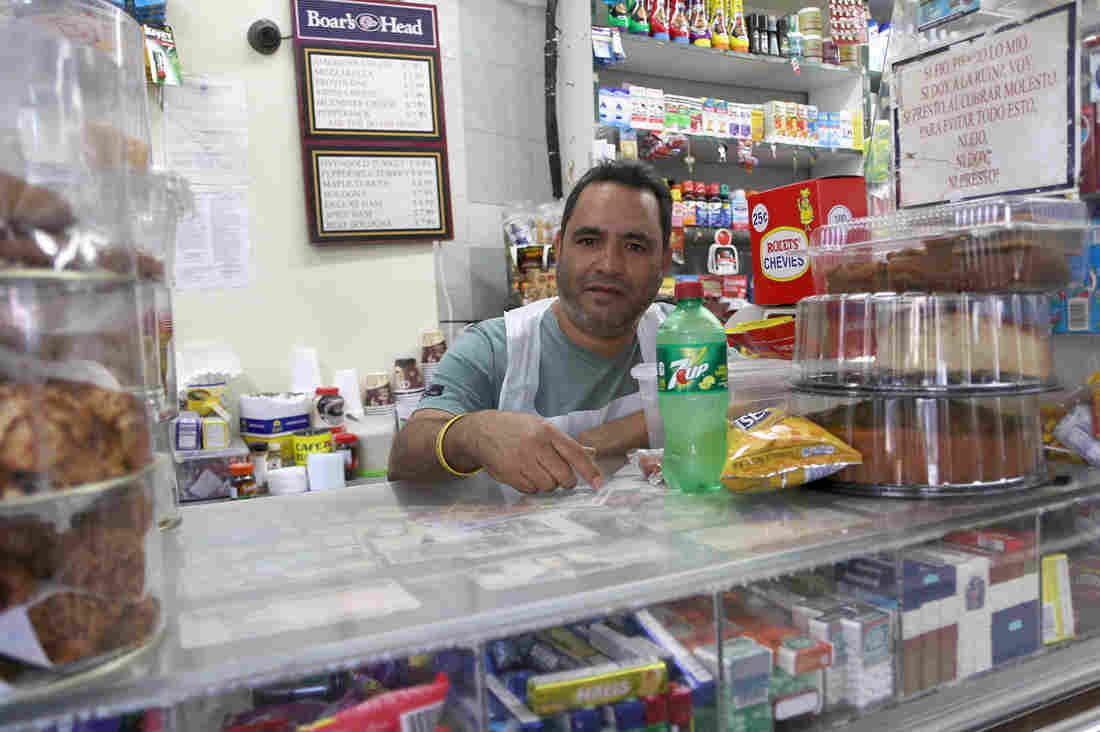 Bolivar Mena manages the Mini Market in Queens frequented by writer Angely Mercado. He always greets his customers and does his best to manage morning and afternoon rushes.

Bolivar Mena manages the Mini Market in Queens frequented by writer Angely Mercado. He always greets his customers and does his best to manage morning and afternoon rushes.

I also go because bodegas are one of the things that have kept me Caribbean throughout my life. As the child of a Puerto Rican man and a Dominican immigrant, Spanish was my first language. I learned the bulk of my English at school — and then I learned shame. I was embarrassed by my parents’ accents; I spent hours scouring my vocabulary to make sure that it sounded “American” to my teachers who lived in places like Long Island. I didn’t want to eat the mango my mom packed as a snack, and I envied the kids in Capri Sun commercials.

But inside a bodega, I could just be. Coca-Cola existed in the same store as coconete, a chewy coconut biscuit from the Dominican Republic. There were Cheetos and yucca crackers that my grandmother could crumble over her sancocho, a hearty meat and vegetable stew. It helped me learn to appreciate the flavors of my parents’ childhood like batata and tamarind by stocking practically every tropical flavor of Mamita’s Ices.

A lot of the bodegeros near me spoke English; some of these men even learned random words in Polish or Arabic so they could interact with some of the newer immigrants in my mainly European and Latino neighborhood. Despite that, I had to speak to them in Spanish. It was a sort of unspoken rule that I should speak Spanish to adults who didn’t speak English as well. That, along with my dad refusing to speak to me in English, helped keep me bilingual during my late elementary to middle-school years. I kept certain Dominican phrases and lilts in my speech thanks to hearing them regularly in bodegas. It was a bodegero, and not my mom, who highlighted the differences between different tubers like malanga and yautia and gave me advice on which phone cards were best for calling family in the Caribbean. And during my final semester of graduate school, an Ecuadorean bodegero who could tweak his Spanish to match each of his customers let me interview him for a class assignment. I asked him questions for more than an hour.

Before my sister and I were old enough to have our own house keys, we were locked outside of our apartment building when we left an after-school program early. Our parents weren’t home yet, so we ran over to the corner store to take shelter from the winter air. The guys behind the counter offered to share their dinner. We declined but were really happy that they pulled out chairs for us and gave us water. It reminded me of how my parents treated guests. We were eventually able to go back home without having to deal with frostbite.

A glorified vending machine can’t give life advice or make you laugh. It can’t ask me: “What’s wrong?” when I go to in at 10 p.m. for a bag full of snacks that I bought to help me eat my feelings after a breakup.

I would rather support a person trying to feed their family — and feed the heart of a neighborhood — than grab something out of a box.

Angely Mercado is a writer based in New York City whose work has appeared in Lenny Letter, Brooklyn Based and The Lily. She writes about culture, feminism and New York.