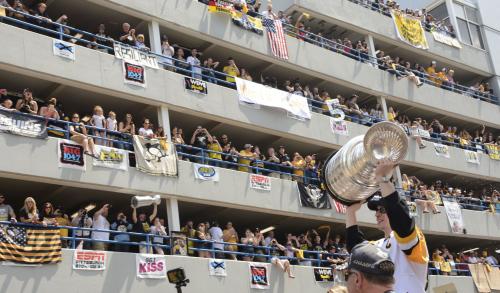 The Stanley Cup champion Pittsburgh Penguins will visit with President Donald Trump at the White House sometime this year, the team announced Sunday.

“The Pittsburgh Penguins respect the institution of the Office of the President, and the long tradition of championship teams visiting the White House,” the statement read. “We attended White House ceremonies after previous championships — touring the historic building and visiting briefly with Presidents George H.W. Bush and Barack Obama — and have accepted an invitation to attend again this year.

“Any agreement or disagreement with a president’s politics, policies or agenda can be expressed in other ways. However, we very much respect the rights of other individuals and groups to express themselves as they see fit.”

Trump later tweeted: “Please to inform that the Champion Pittsburgh Penguins of the NHL will be joining me at the White House for Ceremony. Great team!”

On Saturday, Trump said the Golden State Warriors were not welcome to the White House to celebrate their 2017 NBA championship.

Following his criticism of the NFL at a political rally on Friday night for allowing players to protest during the national anthem, Trump rescinded any invitation coming to the Warriors to visit the White House.

“Going to the White House is considered a great honor for a championship team. Stephen Curry is hesitating, therefore invitation is withdrawn!” Trump tweeted Saturday morning.

Since taking office in January, Trump has hosted the Super Bowl champion New England Patriots and members of the World Series champion Chicago Cubs to honor their titles.