You are at:Home»Tech»New simulation technology to predict refugee destinations could improve aid efforts 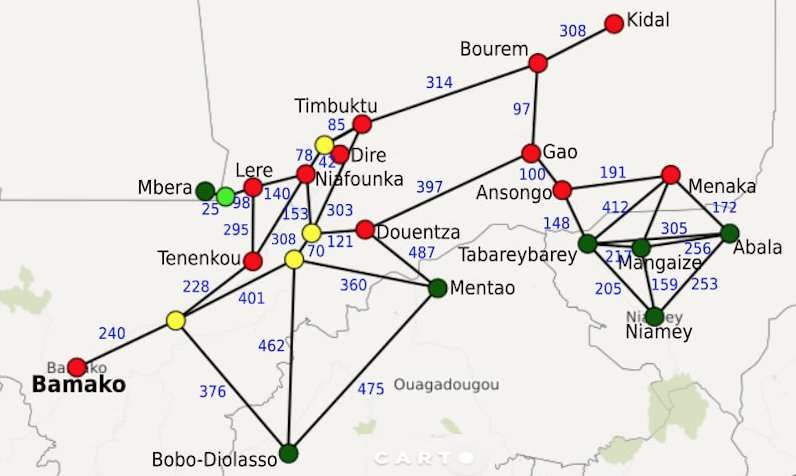 The data-driven simulation tool consistently managed to predict at least 75% of refugee destinations correctly after the first 12 days for three different recent African conflicts. It also out-performed alternative existing forecasting techniques (‘naïve predictions’) to predict where, when and how many refugees are likely to arrive, and which camps are likely to become full. They reported their results in Scientific Reports.

The research team constructed their simulations for the Burundian crisis in 2015, triggered when Pierre Nkurunziza sought to become president for a third term; the Central African Republic (CAR) crisis in 2013, triggered when the Muslim Seleka group overthrew central government; and the Mali civil war in 2012, triggered by insurgent groups campaigning for independence of the Azawad region.

To make these simulations possible, and to validate their correctness, the team relied on open data sources, including refugee registration data from the United Nations High Commissioner for Refugees (UNHCR), conflict data from the Armed Conflict Location and Event Data Project and geographic information from Microsoft Bing Maps.

Although not all refugee movements are correctly predicted in their simulations, their approach reproduced the key refugee destinations in each of the three conflicts, and can be re-applied to simulate other conflict situations reported on by the UNHCR.

For example, in Burundi, the simulation correctly predicted the largest inflows in Nyarugusu, Mahama and Nakivale during the conflict’s early stages, while in CAR the simulation correctly reproduced the growth pattern in East camp of Cameroon, as well as the stagnation of refugee influx into Chad’s camps. In the case of Mali, the predictions accurately captured trends in the data for both Mbera and Abala, which together account for around three-quarters of the refugee population.

The researchers’ approach uses a new agent-based modelling program, named Flee, which has been released to the public alongside their paper. Agent-based modelling has been used more widely to study population movements, and has become a prominent method to explain migration patterns. However, this is the first time that it has been used to predict the destinations of refugees fleeing conflicts in Africa.

Writing in Scientific Reports, Suleimenova, Bell and Groen explain that their simulation is not directly tailored to these conflicts, but a ‘generalised simulation development approach’ which can predict the distribution of refugee arrivals across camps, given a particular conflict scenario and a total number of expected refugees.

This simulation development approach helps organisations to rapidly develop simulations when a conflict occurs, and allows them to investigate the effect of border closures between countries and forced redirection of refugees across camps. It also helps them to define procedures for collecting data and validating simulation results, aspects which are usually not covered when presenting a simulation model alone.

The authors state: “Accurate predictions can help save refugees’ lives, as they help governments and NGOs to correctly allocate humanitarian resources to refugee camps, before the (often malnourished or injured) refugees themselves have arrived. To our knowledge, we are the first to attempt such predictions across multiple major conflicts using a single simulation approach.”

While advances continue to be made in data collection during conflicts over the past few years, the researchers urge greater investment: “Empirical data collection during these conflicts is very challenging, in part due to the nature of the environment and in part due to the severe and structural funding shortages of UNHCR emergency response missions. Both CAR and Burundi are among the most underfunded UNHCR refugee response operations, with funding shortages of respectively 76 and 62%”.

With record levels of 22.5 million refugees worldwide, “more funding for these operations is bound to save human lives, and will have the side benefit of providing more empirical data – enabling the validation of more detailed prediction models.”

Regarding future work, the group aims to establish collaborations with humanitarian organisations, adapting their technology to support specific humanitarian efforts, and to further reduce the time of development by automating the construction of these simulations.