You are at:Home»Health»New mother who lost limbs to flesh-eating disease sues Halifax hospital 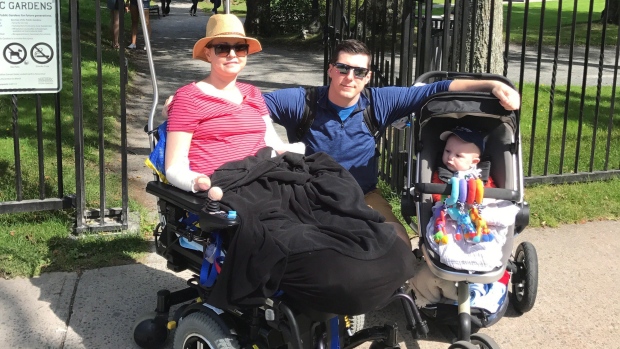 HALIFAX — Lindsey Hubley was diagnosed with flesh-eating disease four days after giving birth and is now a quadruple amputee, has undergone a total hysterectomy and has been forced to spend the first seven months of her son’s life in hospital.

Now, she’s taking legal action against the IWK Health Centre and several Halifax-area doctors for alleged wrongdoings in her care during the birth and her postoperative care.

Lawyer Ray Wagner said a statement of claim filed in Nova Scotia Supreme Court Wednesday alleges that the negligence of five doctors and the hospital caused or contributed to the health issues suffered by Hubley.

“She was very lucky to have survived,” said Wagner in an interview on Wednesday.

Hubley, 33, gave birth to her son Myles on March 2 but was rushed to the hospital a day after being discharged and was later diagnosed with necrotizing fasciitis, otherwise known as flesh-eating disease.

Wagner said it’s alleged part of the placenta was not removed at birth, and that she had a tear on her vagina that required sutures, which could have contributed to her health issues.

He said it’s also alleged that when Hubley arrived back at the hospital on March 5 with abdominal pain — the day after being discharged following the birth — an examination was not performed. Hubley was diagnosed with constipation and sent home.

“Our allegations are that had she been properly assessed when she presented at the hospital … a substantial part of the damage, if not all of it, could have been prevented,” said Wagner.

The next day, she was rushed to the hospital after experiencing more pain and discolouration on her body.

She was later diagnosed with flesh-eating disease, and has since undergone multiple surgeries, including amputations below both of her elbows and knees and a total hysterectomy.

The allegations have not been proven in court, and the IWK did not comment on the claims Wednesday.

Hubley’s fiancee, Mike Sampson, 34, who is also named as a plaintiff in the case, has not been able to work since the birth of Myles. He said “life has been put on hold.”

“Myles and I make our way into the hospital pretty much every day to see mama,” said Sampson in an interview Wednesday. “Our lives have been turned upside down.”

But despite the horrific ordeal, Sampson said his fiancee has remained very positive.

“No mom should ever have to watch their fiancee and their son walk out the door every night for over 200 days,” he said.

“She’s incredibly positive … She has an outlook that this process has taken her arms and her legs, but it’s not going to take her happiness.”

Sampson said Hubley is no longer infected but does require more major surgeries — including a kidney transplant — however they are hopeful she’ll soon be able to start attending rehab.