You are at:Home»Science»New experiments and simulations reveal molecular interactions in extreme phases of water ice 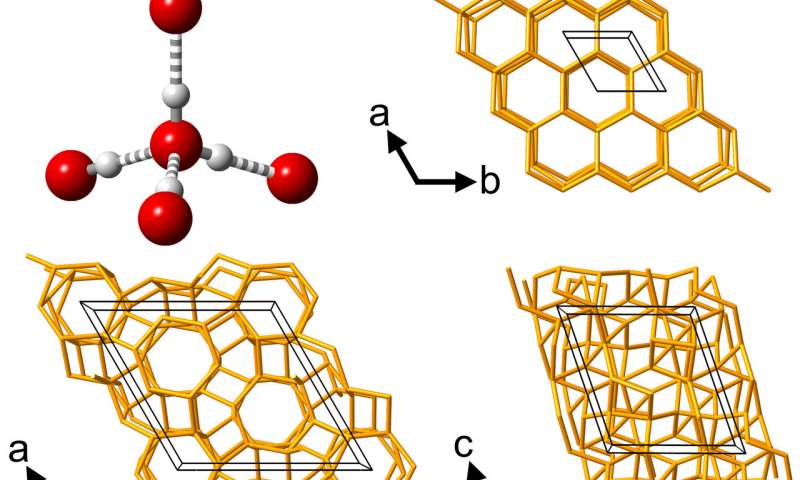 Many of the properties and behaviors of these exotic ices remain mysterious, but a team of researchers recently provided new understanding. They analyzed how water molecules interact with one another in three types of ice and found the interactions depended strongly on the orientation of the molecules and the overall structure of the ice. The researchers describe their results in The Journal of Chemical Physics.

“The new work has given us spectacular new insights on how water molecules behave when packed in dense and structurally complex environments,” said Christoph Salzmann of the University College London. “Ultimately, this knowledge will enable us to understand liquid water as well as water surrounding biomolecules in a much better fashion.”

Water is, of course, essential for life as we know it. But it’s also unique due to its bent molecular shape, with two hydrogen atoms hanging off an oxygen atom at an angle. The overall molecule has an electrical polarity, with positively and negatively charged sides. Because of these properties, water molecules can fit together in a variety of ways when solidifying into ice.

As water typically freezes on Earth, the molecules assemble into a lattice with structural units shaped like hexagons. But at extremely high pressures and low temperatures, the molecules can arrange themselves in more complex ways, forming 17 different phases—some of which may exist on the icy moons of the outer planets.

While the structures themselves are known, scientists don’t yet fully understand how the molecules interact and affect one another, said Peter Hamm of the University of Zurich. In these ice phases, the molecules are bonded together, influencing one another as if they were all connected with springs.

To understand these interactions, Salzmann, Hamm and their team used 2-D infrared spectroscopy on three ice phases with diverse structures: ice II, ice V and ice XIII. In this method, they fired a sequence of ultrashort infrared laser pulses to excite the molecular bonds in the ice, causing them to vibrate.

As the molecular vibrations settle back down to a lower energy state, the molecule emits light at infrared frequencies. By measuring how the intensity of the infrared emission depends on the frequencies of both the pulse and the emitted radiation—producing 2-D spectra—the researchers can determine how the molecules interact with one another.

After collecting data on the ice, some of which had to be frozen at below -200 degrees Celsius and at pressures several thousand times that of the atmosphere at sea level, the researchers used computer simulations of molecular interactions to help interpret their results. While the simulations matched the data for ice II, they did not for ice V and XIII, which speaks to the complexity of the system.

Still, insights from this kind of analysis can help inform computer simulations used to model the behavior of biological molecules like proteins, which are usually surrounded by water.

“Water ice is important, and we need to be able to understand it on a very microscopic level,” Hamm said. “Then we can better understand how water interacts with other molecules, and particularly biomolecules.”