You are at:Home»Headlines»Nervous Pouille loses to Lajovic as France fall behind Serbia 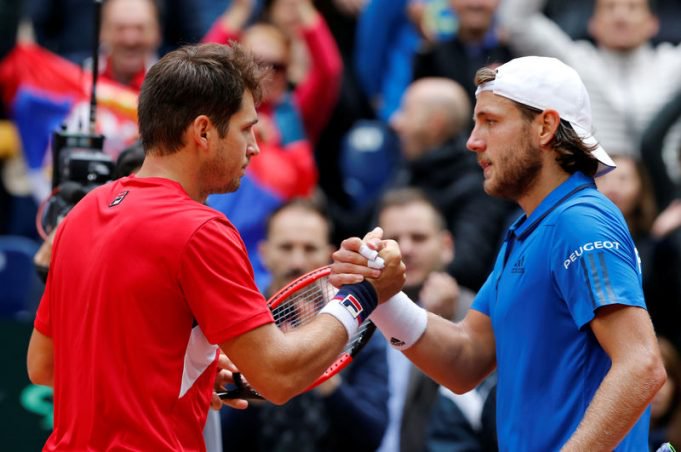 LILLE, France (Reuters) – France found themselves unexpectedly trailing 1-0 at home in their Davis Cup semi-final against Serbia when Lucas Pouille was stunned 6-1 3-6 7-6(7) 7-6(5) by Dusan Lajovic in the first singles match on Friday.

Pouille, the world number 22, was way too shaky in Lille’s Pierre Mauroy stadium, and he rapidly fell behind against world number 80 Lajovic, bowing out after saving five match points.

Jo-Wilfried Tsonga is next up on the indoor claycourt against Laslo Djere.

“This is what Davis Cup is about,” said Serbia captain Nenad Zimonjic. “Both players gave everything – they fought until the end.

“We know we need a miracle to win this tie but we believe in our team.”

France were heavily favored with former Serbian world number one Novak Djokovic absent. But Pouille looked nervous early on, spraying the court with unforced errors while Lajovic made the difference with his forehand.

Pouille fought back to force a tiebreak. But despite the loud backing of the crowd, the Frenchman wasted a set point before handing the set to Lajovic when he fired a forehand wide.

Pouille turned the situation around in the second set as Lajovic started to struggle with his forehand. But in the fourth set, Lajovic broke early on and set up a match point at 5-3.

Pouille saved it and broke back for 5-4. He then saved three consecutive match points on serve in the 12th game, but lost the tiebreak after a brief interruption as Lajovic was suffering from cramps.

Fusion Media or anyone involved with Fusion Media will not accept any liability for loss or damage as a result of reliance on the information including data, quotes, charts and buy/sell signals contained within this website. Please be fully informed regarding the risks and costs associated with trading the financial markets, it is one of the riskiest investment forms possible.