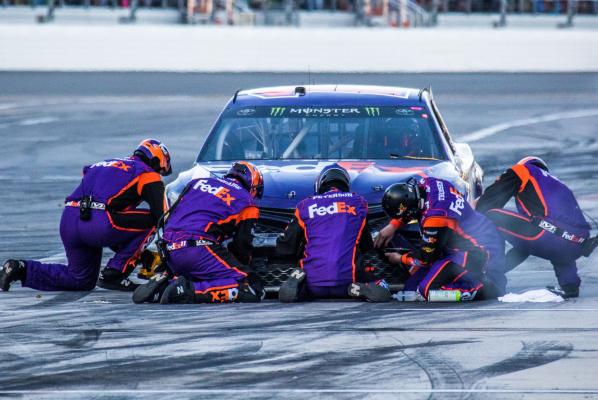 Distributed by The Sports Xchange

Not on the race track, mind you. In Victory Lane.

As part of its post-race ceremony, the Magic Mile awards the winning driver a gigantic live lobster. When Hamlin won at New Hampshire in July, he recoiled when crew chief Mike Wheeler tried to hand him the 22-pound prize.

Understand that Hamlin hates lobsters. He can’t eat if someone is consuming a lobster at a nearby table. And though he finally posed for a few photos with the giant lobster after the summer race, it was not an experience the driver of the No. 11 Joe Gibbs Racing Toyota relished.

So even if Hamlin wins the second race in the Monster Energy NASCAR Cup Series Playoffs and punches his ticket to the next round, he’ll visit Victory Lane with a distinct sense of dread, even though the lobster’s claws are held firmly shut by large rubber bands.

“Yeah, I’ve never really liked them to begin with,” Hamlin said. “I don’t like the taste of them. I don’t — I just don’t like looking at them. They have pincers, really, so I don’t like anything that’s ugly and has pincers.

“I don’t know — it’s just a big scorpion in my mind. I try to stay away from them and, yeah, I’ve had some interesting moments with them for sure that I don’t care to recall or bring back up.”

Of course, those who might want to play a practical joke on Hamlin know how to devise a prank that’s guaranteed to be effective.

A lobster once appeared mysteriously in the toilet in Hamlin’s motor coach.

“I’ve had one in my toilet before, yes,” Hamlin said. “It was disturbing.”

One of the perks of NASCAR stardom is the ability to own and maintain a private jet.

But the use of a private plane isn’t about luxury. Given the scheduling demands of top drivers, getting from place to place as quickly and efficiently as possible is an essential aspect of the job.

As a consequence, a driver of the stature of Dale Earnhardt Jr. doesn’t fly commercial aircraft too often, but when he does, Earnhardt can find reasons to enjoy the experience.

And after he puts his full-time driving career behind him at the end of the year, Earnhardt may see his frequency of commercial travel increase.

“I don’t fly commercial that often, to be honest and up front about it,” Earnhardt said. “So when I do, I’m like ‘Man, this is going to be neat.’ And (wife) Amy’s like, ‘Oh no, it ain’t. You’re not going to like it. Wait until this happens or that happens’ … and she’s just naming things that happened.

“But I don’t mind doing it. I like to do it. Especially flying in and out of Charlotte we get to go by Whisky River (one of his nightclub locations is in Charlotte Douglas Airport). I don’t really get a lot of time to go by there to see what’s going on. But sitting around and waiting on the gate to open and all that stuff, I’ve not done it enough to hate it.

“So that’s really where it is. And I guess I’m spoiled would be a good way to put it. Certainly, as I go into this new chapter in life, and get further down the road, I don’t know that owning a private plane is a long-term situation for me. So I’m understanding that there are going to be some more commercial flights in my future. So maybe one day I’ll grow to hate it. But, for now, I don’t mind it too bad.”

BLANEY HOPES TO KEEP UP WITH THE RACE TRACK

Playoff driver Ryan Blaney is looking for a single-digit finish this weekend, and he’s off to an excellent start.

In this year’s July race, Blaney ran better than 19th throughout most of the afternoon, but as the traction compound applied to the asphalt began to wear off, the handling of his car deteriorated. That was an object lesson for the No. 21 Wood Brothers Racing team.

“The biggest thing I felt like we struggled with in the first race this year was when the grip strip went away, we didn’t have our car ready for when it finally faded away,” Blaney said after Saturday’s first practice at the Magic Mile.

“It’s going to fade away like the first race, and it’s just a matter of the second half of the race or the last 100 (laps) — whenever it does fade — is making sure your car is handling well so you don’t have to run in it, and you can migrate back to the normal lane.”

Blaney qualified fourth on Friday, and in Saturday morning’s first practice session he was second fastest behind Kyle Larson. In final practice, under conditions that will most closely resemble those for Sunday’s race, he was sixth on the speed chart behind series leader Martin Truex Jr., Kevin Harvick, polesitter Kyle Busch, non-Playoff driver Daniel Suarez and Larson.

Happy Hour was anything but happy for Joey Logano. While other drivers practiced during Monster Energy NASCAR Cup Series final practice, Logano sat on pit road, serving the entire 55 minutes in NASCAR’s version of a penalty box. Logano’s No. 22 Team Penske Ford failed in repeated attempts to get through pre-qualifying inspection on Friday and did not make an attempt during time trials. He’ll start last in Sunday’s ISM Connect 300 with no practice during Happy Hour. …

Dale Earnhardt Jr., who qualified 15th on Friday, was eighth fastest in final practice at 131.112 mph, second best among non-Playoff drivers. Earnhardt is racing at New Hampshire for the last time in the No. 88 Hendrick Motorsports Chevrolet. …

Ty Dillon scraped the wall with his No. 13 Chevrolet in Happy Hour and will start Sunday’s race from the rear in a backup car. Jimmie Johnson (seventh in final practice) and Chase Elliott (13th) also are in backup cars because of accidents in Friday’s opening practice, but will start where they qualified (12th and 14th, respectively) because their wrecks occurred before time trials.