You are at:Home»Sports»Martin O’Neill wants Republic of Ireland to win in Wales for stricken captain Seamus Coleman 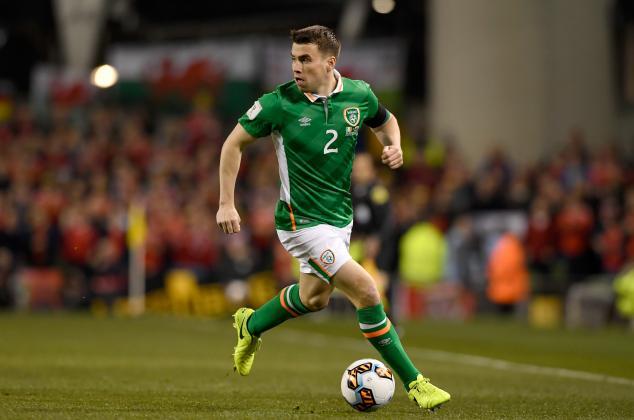 Martin O’Neill has challenged the Republic of Ireland to give skipper Seamus Coleman a World Cup incentive as he moves closer to a comeback.

Coleman watched his team-mates train at the Cardiff City Stadium on Sunday evening, having entered the final stages of recovery from the horrific double leg fracture he suffered against Wales in March.

The two sides meet again on Monday evening as the Group D campaign draws to a close.

Both Wales and the Republic are still in with a chance of automatic qualification, but are equally aware that victory for one would see the other miss out.

A second win in four days would book the Republic a play-off berth as a result of Scotland’s 2-2 draw in Slovenia, and O’Neill says his players will have Everton full-back Coleman firmly in their thoughts when they run out.

O’Neill was cautious when asked if the game gave Ireland a chance to gain revenge for the ugly Neil Taylor challenge which left Coleman facing months on the sidelines.

He said: “I don’t know about revenge, but certainly I think the view among the players is that if Russia was available to us and we could make it there, I would think Seamus would be very much at the forefronts of our minds.

“He has obviously been a class player, a world-class player and he’s been essential for us. We have missed him and it would be nice to go there.

“He is making a good recovery now, but I think that when he’s ready, he will get back to the form he showed both for club and country, and it would be nice if by the time he is back that he has got something to cheer on the international level.”

If losing Coleman was a blow to Ireland, Gareth Bale’s absence has been just as disappointing for Wales, although O’Neill is not convinced it will weaken them to any significant degree.

“We’ve had our absentees in the past ourselves and we’ve had to cope, and Wales have had to cope without Gareth Bale before.”

O’Neill has presided over big games during almost four years as Ireland manager, most notably a qualifier victory over world champions Germany and a Euro 2016 finals win against Italy which secured a place in the last 16.

That second game in Lille saw the Republic deliver in their hour of need, and the manager has sensed a similar atmosphere within the camp since Friday night’s 2-0 victory over Moldova which set the tone for the showdown in Cardiff.

O’Neill said: “Friday night became a big game for us because we had to win that game to make this game really worthwhile for us and after that, it is exactly that feeling.

“Big nights that we have had in the past – and in the recent past – it’s fresh in the memory.”

Ireland will be able to call upon Robbie Brady and James McClean once again after the pair sat out against the Moldovans through suspension, and O’Neill will run the rule over some of his older men, with two-goal hero Daryl Murphy and playmaker Wes Hoolahan having put in extended shifts against Moldova.

However, Everton midfielder James McCarthy has returned to his club despite stepping up training after the knee injury which has kept him out since pre-season.