You are at:Home»U.S»Marilou Danley: What We Know So Far as Las Vegas Shooter’s Girlfriend Returns to U.S.

Updated | The girlfriend of Las Vegas shooter Stephen Paddock has returned to the United States and is due to meet with investigators searching for a motive behind the worst mass shooting in modern U.S. history.

Marilou Danley, 62, touched down at Los Angeles International Airport on Tuesday evening, a law enforcement official told CNN. Danley was captured on video arriving in the airport in a wheelchair, according to NBC News.

Investigators have named Danley as a person of interest in the investigation, but have not suggested that she helped Paddock plan the massacre. The gunman was found to have been using Danley’s ID in the runup to the shooting.

Danley had been traveling in her native country, the Philippines, when Paddock began shooting at concertgoers from his room on the 32nd floor of the Mandalay Bay hotel. At least 59 people were killed and more than 500 injured in the attack.

Danley reportedly lived in Australia for about 10 years until the late 1980s. Australian Foreign Minister Julie Bishop said that U.S. officials had contacted their Australian counterparts for help locating her. 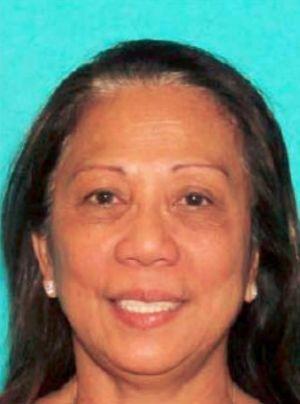 Marilou Danley remains a person of interest in the investigation into the shooting and county police have said they will want to speak to her once she has returned to the United States. Las Vegas Metropolitan Police

Danley seems to have been in a relationship with Paddock for several years. She filed a joint petition for divorce from her former husband in February 2015; at that time, she listed an address in Reno, on the Nevada-California border, as her home. The address was owned by Paddock.

Danley now lives at the Mesquite address formerly inhabited by Paddock and where police discovered a stash of weapons, explosives and thousands of rounds of ammunition. She formerly worked as a hostess at the Atlantis Casino Resort in Las Vegas, according to her LinkedIn profile.

Danley has a daughter who lives in California, where she travels regularly to visit her, former neighbors told Newsweek.

As well as trying to determine Paddock’s motives, authorities will likely want to question Danley about a $100,000 transfer that Paddock reportedly wired to the Philippines days before he carried out his deadly attack.

Las Vegas Sheriff Joseph Lombardo declined to comment on the transfer. But a spokesman for the Philippines’ National Bureau of Investigation, Nick Suarez, confirmed the transfer to AFP and said that the money had been sent to Danley’s account.

This article has been updated to remove information about Danley from a Newsweek investigation that has since been retracted.