You are at:Home»Top Stories»Kim Jong-un Will Fire Missiles At Guam If Trump Is Serious About Disarming North Korea With Force

North Korea is once again making threats to go after the U.S. island territory of Guam with missiles, warning that President Donald Trump’s constant barrage of threats on social media and in the press, not to mention the various military moves he has made are pushing Pyongyang to a point where there will be no turning back.

An intricate plan to strike Guam with four Hwasong-12 intermediate-range ballistic missiles was first brought to life by North Korea in late August, not long after Trump had spoken to the media and said he was prepared to “unleash fire and fury like the world has never seen” against North Korea.

After a number of tense days passed, North Korean leader Kim Jong-un announced he had decided to hold back the plan for the time being, but would reserve it for future use.

Trump said he felt the move was a “very wise and well-reasoned decision.”

However, the two leaders almost immediately went back to their war of words, trading insults from the highest levels of government, at one point, forcing Russian Foreign Minister, Sergey Lavrov, who has continually spoken of peace talks between the two as being the best way to avert disaster, to compare them to a couple of kindergarteners.

Just heard Foreign Minister of North Korea speak at U.N. If he echoes thoughts of Little Rocket Man, they won’t be around much longer!

Meanwhile, the young North Korean leader fired back, calling Trump “mentally deranged” and implied Trump was too weak, old, and senile to be running the United States.

Trump has since repeated his “Rocket Man” moniker for Kim both at the U.N. last month and again on social media, where he tweeted earlier this month that he told Secretary of State Rex Tillerson that he was “wasting his time” talking to North Korea because the President doesn’t feel they deserve to be handled in a diplomatic way. Meanwhile, North Korean leaders likened Trump’s speech at the U.N. Assembly last month to a “barking dog.”

Trump has vowed not to fail in handling North Korea as he claimed his last three predecessors did.

Being nice to Rocket Man hasn’t worked in 25 years, why would it work now? Clinton failed, Bush failed, and Obama failed. I won’t fail.

On Friday, North Korea’s official Korean Central News Agency (KCNA) published a new article attributed to Kim Kwang Hak, a researcher at the North Korean Foreign Ministry’s Institute for American Studies, in which he lambasted the Trump administration, and its pursuit of joint drills with Japan and South Korea, as well as the president’s militant “letters” on Twitter. In tweets, the Republican leader has suggested the U.S. is leaning heavily towards the idea of using force to disarm North Korea’s nuclear and ballistic weapons, and Kim wrote that such threats have led North Korea to revive the earlier plan they had to attack the Pacific island.

“The U.S. military action hardens our determination that the U.S. should be tamed with fire and lets us take our hand closer to ‘trigger’ for taking the toughest countermeasure,” he added. 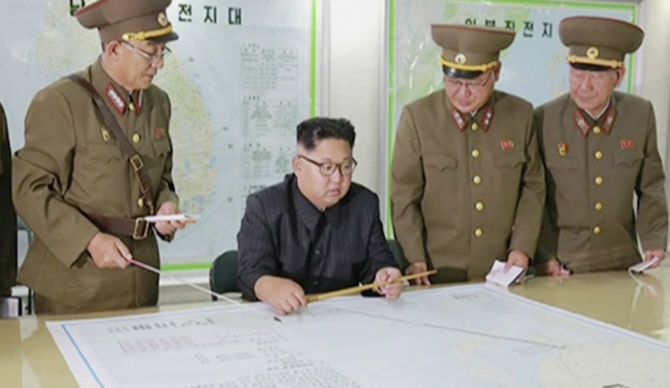 Clearly, North Korea takes exception to any U.S.-led activity taking place in Japan and South Korea, while the United States insists all of that is done in retaliation to North Korea testing missiles of its own.

Both sides are basically claiming self-defense is their motive for their aggressive behavior.

Kim Jog-un has continued to behave defiantly and develop and test his country’s nuclear and ballistic weapons capabilities despite the implementation of U.S.-led sanctions at the U.N. Security Council. Kim, who took power after his father’s death in 2011, has gone out of his way to expand and update his country’s military power, successfully testing intercontinental ballistic missiles (ICBMs) and a hydrogen bomb this year alone.

Trump, like previous U.S. presidents, feel North Korea’s has the right to have nuclear weapons in its possession. The Trump administration has boosted the U.S.’s military presence in the Asia-Pacific and urged allies to take steps to completely isolate North Korea. Allies have urged Trump to adopt a less aggressive approach to the nuclear crisis, and Russia and China, who also want the matter resolved peacefully, have begun planning their own possible solution to the standoff.