You are at:Home»News»Isaiah Thomas: Text from Tom Brady after Cavs-Celtics trade ‘changed my perspective’ 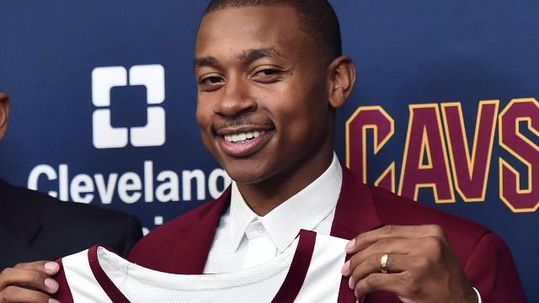 Cleveland Cavaliers guard Isaiah Thomas admittedly wanted to be the “Celtics version of (Tom) Brady” before he was traded away from Boston — where he envisioned playing the rest of his career to go down as one of the historic franchise’s all-time great players.

“I look at a career like Tom’s with the Patriots — and that’s exactly the kind of career that I had hoped to be building here with the Celtics,” Thomas wrote in The Players’ Tribune. “Being this low draft pick … coming in without acclaim … and then — through hard work, and determination, and some talent that maybe people had overlooked — just starting to win, and win, and win.”

But life didn’t go according to plan, and Thomas was left “stung” with a blockbuster trade that sent him to LeBron James’ Cavs and Kyrie Irving to the team he had poured out his heart for. After the trade, Thomas said Brady texted him, wising him well — in Tom Brady form.

Brady: “Yes it is. Best of luck. You’re gonna do great. Keep in touch.”

Thomas wrote of the exchange: “When I got that text from Tom, you know, there was part of me that felt a little down.

“But then I thought about the text some more,” he wrote, “and I think I changed my perspective a little. I think I realized, like, Yo — that’s Tom (expletive) Brady. And I was only here for two and a half years. Tom Brady isn’t sending a text like that to guys who played in Boston for two and a half years — unless they did something very special.”