You are at:Home»U.S»Ig Nobels Awarded For Research Into Big Ears, Feline Fluidity 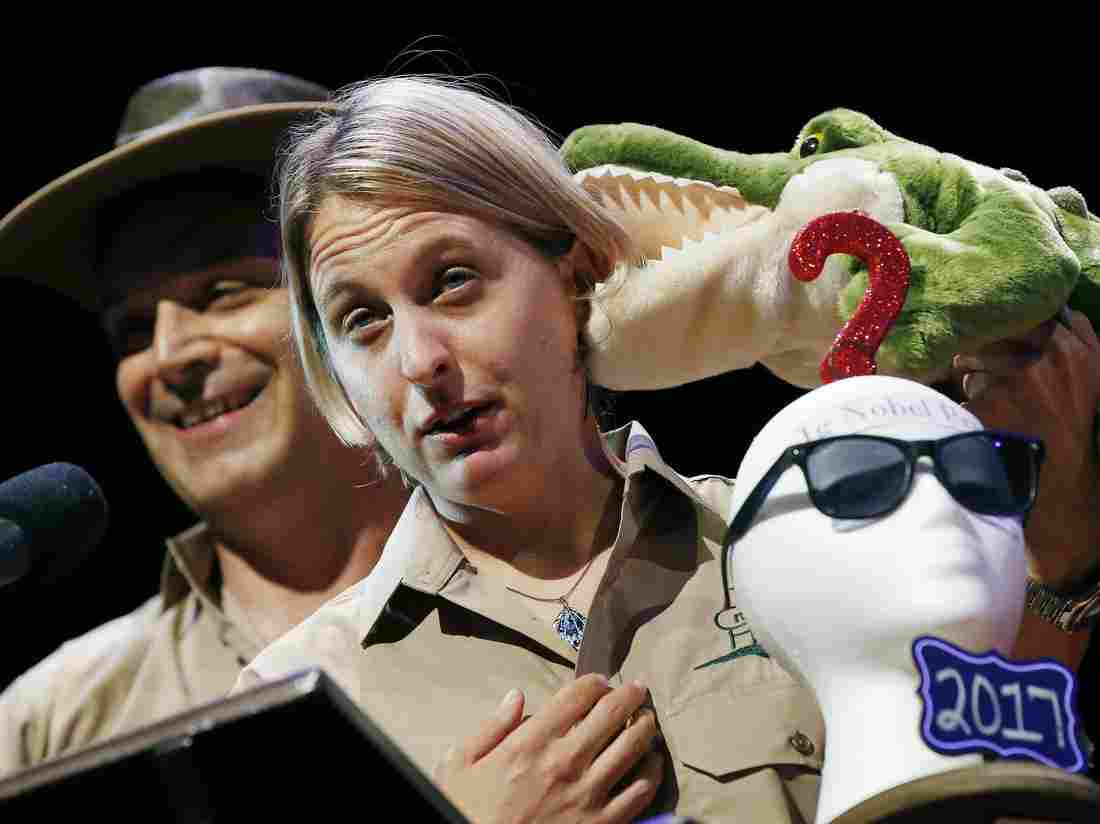 Matthew Rockloff and Nancy Greer give their acceptance speech after winning the Ig Nobel Economics Prize during ceremonies at Harvard University in Cambridge, Mass., on Thursday. The pair won for their experiments to see how contact with a live crocodile affects a person’s willingness to gamble.

Matthew Rockloff and Nancy Greer give their acceptance speech after winning the Ig Nobel Economics Prize during ceremonies at Harvard University in Cambridge, Mass., on Thursday. The pair won for their experiments to see how contact with a live crocodile affects a person’s willingness to gamble.

Can a cat be both a liquid and a solid? Does contact with a crocodile influence a person’s willingness to gamble? And do old men really have big ears?

Those are just a few of the questions studied by scientists who received Ig Nobel Prizes at Harvard University on Thursday, at the less-than-prestigious ceremony put on by the otherwise-august institution for the past 27 years.

“Each winner has done something that makes people laugh, then think,” said Marc Abrahams, who founded the awards in 1991 and writes for the decidedly non-peer-reviewed journal Annals of Improbable Research.

This year’s awards in physics, economics, medicine and even an Ig Nobel Peace Prize, included something described as “a replica of a human head supporting a replica of a question mark,” along with a piece of paper saying you won an Ig Nobel (signed by actual Nobel laureates) and $10 trillion — Zimbabwean.

The mascot for the annual prize is called The Stinker, a version of Rodin’s The Thinker, toppled over on its backside.

In an apparent reference to singer Bob Dylan’s reluctance to accept his 2016 Nobel Prize in Literature, Marc-Antoine Fardin — who took home (to France) an Ig Nobel for his team’s research into feline phase transition — said he was excited about attending the ceremony: “It might be cool to refuse a Nobel Prize, but it’s certainly uncool to refuse an Ig Nobel.”

Commenting on his unique research, Fardin said: “I saw this question asked on the Internet. It was based on the common definition that a liquid is a material that can adapt its shape to its container.”

“It seems to be the case,” he said, displaying photos of his results – various cats curled into bathroom lavatories, bowls and even a wine glass.

The Ig Nobel ceremony is punctuated by comedic skits, silly librettos and squadrons of paper airplanes. Recipients are encouraged to come in costumes that honor the spirit of their research.

This year’s Anatomy Prize went to a team led by a British physician, James Heathcote, for research published in 1995 confirming that human ears grow about 2 millimeters per decade after the age of 30. So old men really do have bigger ears, it turns out — and the older, the bigger.

“It’s a strange honor to have, but I am thrilled,” Heathcote — who may or may not have gotten the call at 3 a.m., given the time difference between Boston and London — told The Associated Press.

And Matthew Rockloff and Nancy Greer landed the Economics Prize for looking into the age-old question: How does contact with a live crocodile affect a person’s willingness to gamble?

Another highlight of the evening’s ceremony was the awarding of the Ig Nobel Peace Prize, which was awarded for the discovery of a treatment for sleep apnea and snoring. Dr. Milo Puhan, director of the Epidemiology, Biostatistics and Prevention Institute at the University of Zurich in Switzerland, found that playing the didgeridoo, that Australian aboriginal instrument, seems to help.

Why the Peace Prize? It “also improves the sleep quality of partners,” researchers concluded.

— Fluid Dynamics: A Study on the Coffee Spilling Phenomenon in the Low Impulse Regime by Jiwon Han.

Actors take on roles they hope will get them an Oscar. Serious scientists may or may not be driven in pursuit of a Nobel Prize. But one wonders if perhaps their slightly less-than-serious colleagues are secretly angling for an Ig Nobel.

It’s an enduring mystery of science.

But we can answer something more quantifiable: It turns out that at least one person is both a Nobel and an Ig Nobel laureate.

Andre Geim, a Russian-born physicist who won a Nobel Physics Prize in 2010 for the discovery of a new form of carbon called graphene had received an Ig Nobel 10 years earlier for experiments in magnetic frog levitation that demonstrated a phenomenon known as diamagnetism.

So for this year’s winners of an Ig Nobel, there is perhaps nowhere to go but up.