You are at:Home»News»HP’s new Spectre 13 packs Intel 8th-gen internals and a 4K display 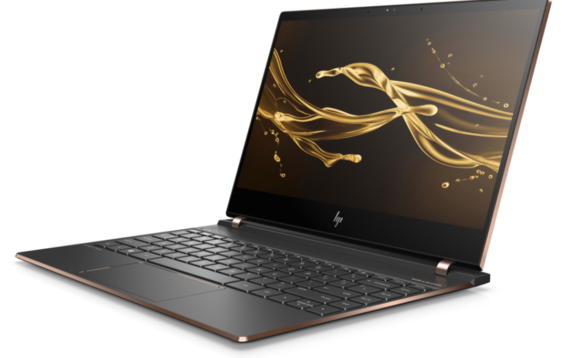 PC MAKER HP has unveiled its second-generation Spectre 13 (above), which the firm is touting as “the world’s thinnest touch laptop”.

The MacBook rival, despite its slender 10.4mm profile, packs either an Intel 8th-gen Core i5 or Core i7 CPU inside its CNC aluminium frame, alongside up to 16 GB LPDDR3 RAM and up to 1TB PCIe SSD.

This makes for a battery life of 11.5 hours, according to HP, which is almost a two-hour improvement compared to last year’s Spectre 13. The firm also boasts that its baked-in Fast Charge tech means the laptop can get 50 per cent juice after just 30 minutes on charge.

HP has also unveiled a new version of the Spectre x360 (below), its Lenovo Yoga-esque device that can transform into multiple modes. Improving on last year’s model, HP claims the new version offers “the world’s longest battery life in a quad-core convertible”, with the firm promising up to 16.5 hours on a single charge.

The new model also sports a 13in display (up to 4K) surrounding by ‘micro-edge’ bezels, and like the Spectre 13, it comes powered by Intel’s 8th-gen processors. There’s also a bundled Windows Ink Certified pen that’s rechargeable via USB-C, a fingerprint scanner and Windows Hello support.

The new HP Spectre x360, which will be made available in Ash Copper and Pale Rose Gold, will be also arriving in the UK next month, with pricing starting from £1299.99.