You are at:Home»News»Harvey in Louisiana: Storm makes second landfall

Weakened but not finished, Harvey is dumping even more rain onto the state of Louisiana. Back in Texas, rescue work continues and residents have been evacuated as a heavily flooded chemical plant threatens to explode.

Tropical Storm Harvey made landfall in Louisiana on Wednesday, five days after devastating Texas as a Category 4 hurricane.

Since delivering catastrophic flooding to Houston and the surrounding area, Harvey returned to the Gulf of Mexico before meandering back for a second round and making a second landfall west of Cameron, Louisiana.

Harvey was expected to dump another 3 to 6 inches (7.5 to 15 centimeters) of rain on Wednesday, with an expected storm surge of up to 4 feet (1.2 meters) along the western part of Louisiana’s Gulf Coast.

The National Hurricane Center said Harvey had weakened to a tropical depression on Wednesday night, with sustained winds of 35 miles per hour (56 kilometers per hour). The forecaster warned, however, that “catastrophic” flooding would continue for the next few days.

“Catastrophic and life-threatening flooding will continue in and around Houston, Beaumont/Port Arthur, eastward into southwest Louisiana for the rest of the week,” the NHC said. 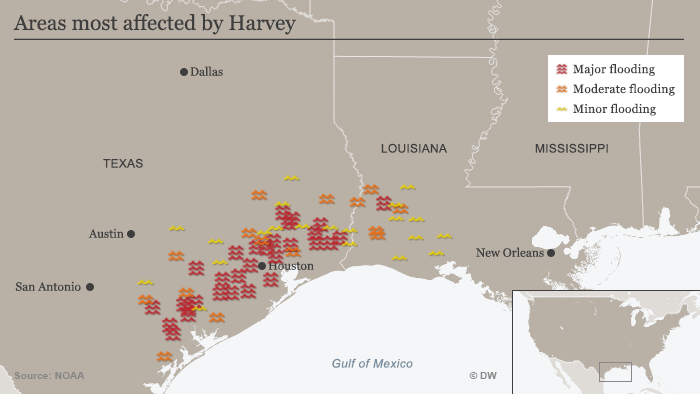 Louisiana Governor John Bel Edwards said on Wednesday afternoon that the threat of flooding in the southwestern region of the state appeared to be diminishing as the storm moved away from the region. Still, the National Weather Service in Lake Charles, Louisiana continued to issue a flash flood warning for several areas along the Texas-Louisiana border.

By the afternoon, around 330 people had gathered at a Lake Charles shelter to escape their waterlogged homes. Governor Edwards said the number was expected to grow as more people were rescued from flooding in eastern Texas.

Residents of low-lying New Orleans were reminded of the tragedies of Hurricane Katrina 12 years ago. Authorities warned of flood dangers, but the city appeared to have dodged the worst of the storm with minimal rain.

After dumping rain on Louisiana, the storm is forecast to head north to Arkansas, Tennessee and parts of Missouri.

Back in Texas, a heavily flooded organic chemical plant located outside Houston is likely to catch fire or explode in the next six days, the plant’s chief executive said Wednesday.

Richard Rowe, the chief executive of Arkema’s North America unit, told reporters there was no way to prevent a fire at the plant as it is submerged under 6 feet (1.83 meters) of water.

Residents living within a 1.5-mile (2.4-kilometer) radius around the plant have been ordered to evacuate. Rowe said he was “comfortable” with the size of the evacuation zone, saying there could be an “intense fire” that would result in a large amount of black smoke. He added that the smoke wouldn’t pose any “long-term or harmful impact.”

The storm has so far claimed the lives of at least 23 people, and forced more than 30,000 people from their homes. With many still unaccounted for, the death toll is likely to rise.

At a press conference on Wednesday, Texas Governor Greg Abbott said his state could need more than $125 billion (105 billion euros) in aid from the US government, making it one of the costliest US natural disasters. He added that Harvey’s scope exceeded that of Hurricane Katrina in 2005, and said the aid should reflect the level of damage sustained from the storm.

The people of Houston spent Tuesday night in lockdown as Mayor Sylvester Turner declared a curfew to aid search efforts and thwarting looters.

Adding to their woes, two 70-year-old reservoir dams that protect downtown Houston and a levee in a suburban subdivision began overflowing on Tuesday. Engineers began releasing water to ease the strain on dams but their efforts were not enough.

The city of Port Arthur east of Houston was also hit with torrential rains, making it nearly impossible for rescuers and volunteers to reach the area.

“Our whole city is underwater right now,” Port Arthur’s mayor, Derrick Freeman, posted on Facebook on Wednesday. He assured stranded residents that rescuers were on the way. 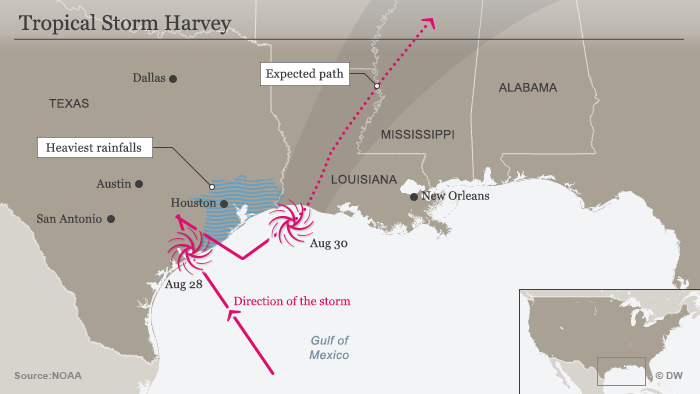 US President Donald Trump visited Texas on Tuesday to survey the damage. Trump said he was pleased with the response of authorities, but said it was too soon to celebrate.

“We won’t say congratulations,” he said. “We don’t want to do that…We’ll congratulate each other when it’s all finished.”

Germany has offered all possible assistance to the United States in dealing with the disaster. In a letter to Trump, President Frank-Walter Steinmeier wrote that Germany was “ready to contribute to relief efforts.”

As Harvey made landfall for the second time, forecasters warned of possible tornadoes across a large part of the South.

The storm has spawned at least one tornado in Mississippi, but no injuries were immediately reported. The National Weather Service said a few tornadoes would likely develop in northeast Louisiana and across southern and central portions of Mississippi.

The National Hurricane Center also cautioned about the next storm threat brewing in the Atlantic.

On Wednesday, the forecaster said a tropical storm dubbed Irma is expected to become a hurricane by Thursday or Friday and is currently located 480 miles (770 kilometers) west of the Cape Verde Islands.

They added there are currently no coastal watches or warnings in effect.