You are at:Home»U.S»Gymnast Aly Raisman was sexually abused by Larry Nassar

One of the most talented and decorated female gymnasts in the history of the sport has come forward claiming she was sexually abused by the US team doctor.

In an interview set to air on 60 Minutes this Sunday, Aly Raisman says that she too was a victim of Larry Nassar.

Raisman, who will detail her experience in her upcoming memoir ‘Fierce,’ lashed out at those who protected Nassar and allowed these alleged offenses to go on for so long.

‘Why are we looking at why didn’t the girls speak up? Why not look at what about the culture?’ asks Raisman in a preview of her CBS interview.

‘What did USA Gymnastics do, and Larry Nassar do, to manipulate these girls so much that they are so afraid to speak up?’

Raisman, who began being treated by Nassar when she was 15, reveals during the interview that she spoke with the FBI shortly after the Rio Games last summer.

‘USA Gymnastics is very sorry that any athlete has been harmed,’ said the organization in a statement.

‘We want to work with Aly and all interested athletes to keep athletes safe.’ 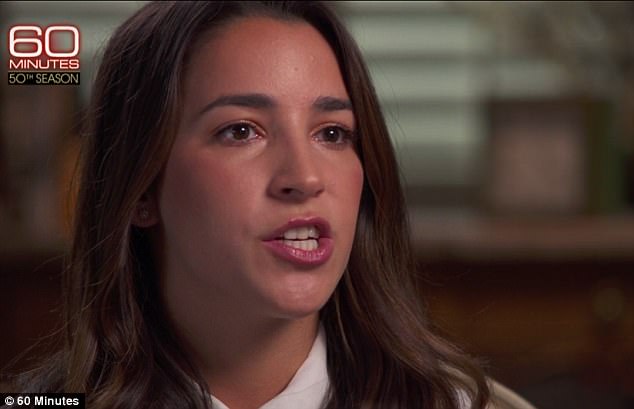 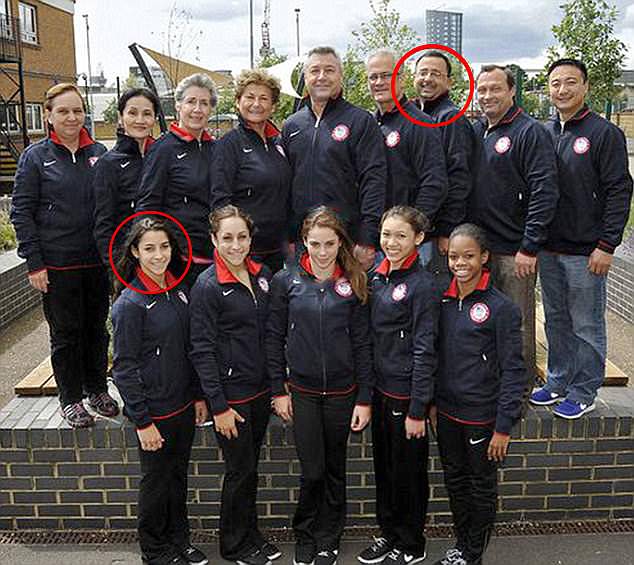 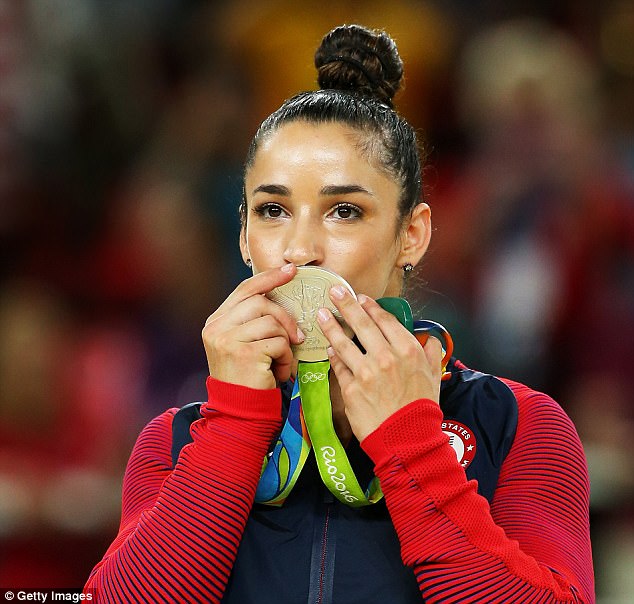 The six-time Olympic medalist was the US captain for both the 2012 and 2016 Games, leading her team to gold in the all-around competition both times.

Raisman, 23, is currently training to return in three years for the 2020 Games in Tokyo, an unprecedented move in the sport which would give her a shot at surpassing Shannon Miller’s US record of seven Olympic medals.

Nassar is currently behind bars in a Michigan prison after pleading guilty to possession of child pornography in July.

Authorities revealed back in December of last year that they had discovered over 37,000 images and videos of child pornography featuring girls as young as six and a Go Pro video of Nassar molesting a group of young girls in a pool.

In a preview clip, interviewer Jon Lapook says to Raisman at one point that she looks ‘angry,’ prompting her to explain why she is so upset with the national team.

‘I am angry. I’m really upset because it’s been – I care a lot you know, when I see these young girls that come up to me, and they ask for pictures or autographs, whatever it is,’ explains Raisman.

‘I just – I can’t – every time I look at them, every time I see them smiling, I just think – I just want to create change so that they never, ever have to go through this.’

The preview did not reveal the extent of the alleged assaults and for how long they occurred, with Nassar having been the team doctor during the 2012 Games in London. 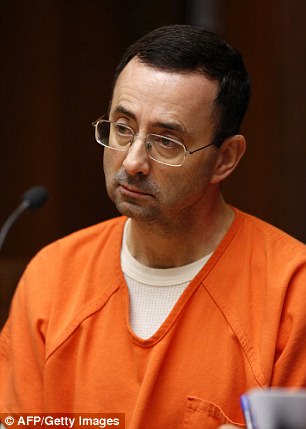 More than 130 victims have now filed lawsuits against Nassar claiming he abused them under the guise of treatment, with a number of these women claiming they were underage at the time of the incident.

Among the accusers is another decorated gymnast, Raisman’s 2012 teammate McKayla Maroney.

It was during the #MeToo campaign last month when Maroney shared her story, claiming Nassar began abusing her when she 13, and that the assaults did not stop until she left the sport just last year at the age of 20.

‘Dr. Nassar told me that I was receiving “medically necessary treatment that he had been performing on patients for over 30 years”,’ Maroney, 21, said of her abuse in a social media post.

‘It seemed whenever and wherever this man could find the chance, I was “treated.” It happened in London before my team and I won the gold medal, and It happened before I won my silver.’

Maroney also detailed what she said was the worst incident back in 2011 during a trip to Tokyo.

She claimed that on the way to the world championship that year Nassar gave her a sleeping pill, and the she awoke to find him performing a ‘treatment’ on her in the hotel.

‘I thought I was going to die that night,’ wrote Maroney.

Soon after she shared her story her teammates from the 2012 Games all voiced their support on social media, with Raisman posting a photo of herself and Maroney hugging with a heart emoji.

Raisman also wrote: ”100% support you. SO proud of you and your strength. Love you like a sister!!’

The athlete previously criticized USA Gymnastics in an interview with The Guardian back in August.

‘I feel like there’s a lot of articles about it, but nobody has said, “This is horrible, this is what we’re doing to change,”‘ said Raisman.

She also expressed her fear, having not yet revealed at that time she was one of the doctor’s victims. 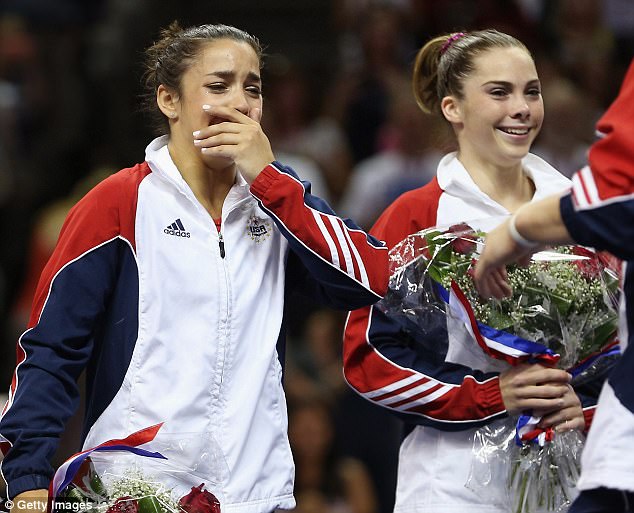 ‘What people don’t realize is that this doctor was a doctor for 29 years. Whether or not he did it to a gymnast, they still knew him. Even if he didn’t do it to you, it’s still the trauma and the anxiety of wondering what could have happened. I think that needs to be addressed,’ explained Raisman.

‘These girls, they should be comfortable going to USA Gymnastics and saying “I need help, I want therapy. I need this.”‘

She also once again spoke about how the young fans factor in to this, and how important it is to her that they have a safe environment.

‘It doesn’t matter if you’re the Olympic champion or you’re an 8-year-old that goes to gymnastics in Ohio, or wherever you are in the U.S. Every single kid is important and I want USA Gymnastics to do a better job with that,’ said Raisman.

Back in March, former star gymnasts testified before Congress about being sexually abused by Nassar in support of a bill that would require tougher sex-abuse reporting for Olympic sports.

‘USA Gymnastics failed its most basic responsibility to protect the athletes under its care,’ said Dantzscher through tears.

‘They failed to take action against coaches, trainers and other adults who abused children. And they allowed Dr. Nassar to abuse young women and girls for more than 20 years.’

Dantzscher also said on Tuesday that she was even sexually abused by Nassar while at the 2000 Olympic Games.

Howard echoed the statements made by Dantzscher, saying: ‘It has become glaringly obvious that USA Gymnastics has not done nearly enough to protect athletes from any form of abuse.’

She went on to state: ‘Dr. Nassar acted as the good guy, supporting me emotionally and promising me relief from the pain. Now I know that in actuality he expertly abused me under the guise of ‘treatment.”‘

The woman were joined on Tuesday by Dominique Moceanu, a 1996 gold medalist and teammate of Strug, who described a ‘culture of fear, intimidation and humiliation, established by Bela and Marta Karolyi.’

She spoke about the emotional and verbal abuse she was forced to deal with during her time with USA Gymnastics while stating that there is an ‘urgent need’ to change the culture of the organization.