You are at:Home»News»Graham-Cassidy Could Exempt Sen. Lisa Murkowski’s State In Exchange For Her Vote 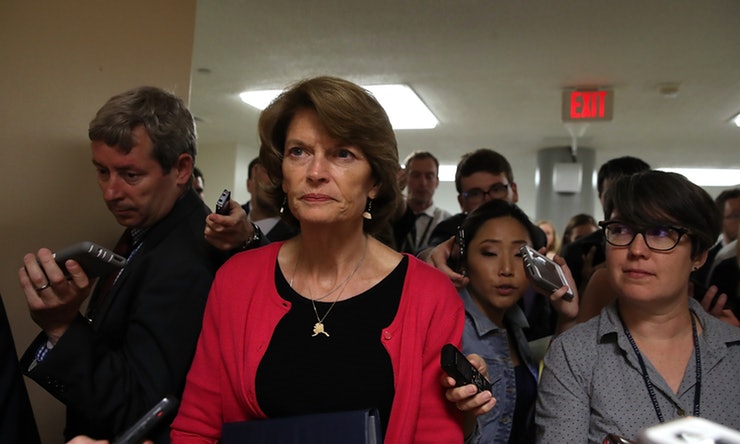 According to the Independent Journal-Review, Senate Republicans may allow Alaska to keep Obamacare in order to convince Alaska Sen. Lisa Murkowski to vote for the bill that otherwise repeals Obamacare for the other 49 states. Murkowski has long been one of the most pro-Obamacare Republicans in the Senate, and her vote was instrumental to sinking past efforts to repeal the law. However, a new draft of the Graham-Cassidy repeal bill attempts to win her over, IJR reported on Thursday, by letting Alaska continue receiving the Affordable Care Act’s subsidies and Medicaid expansion while scrapping those policies for 48 other states.

The text of the alleged proposal hasn’t been released by Senate leadership, and it’s unclear how close it is to being incorporated into the final bill. In addition to Alaska, the plan allegedly allows Hawaii to continue receiving Obamacare benefits as well.

If it passes, the Graham-Cassidy bill will slash funding to the two biggest foundations of the Affordable Care Act: its premium tax credits, in which low- and middle-income Americans receive federal subsidies to help them purchase health insurance, and the Medicaid expansion, which provides additional funding for state Medicaid programs and, as a result, allows more low-income Americans to receive government-funded health insurance.

As a result largely of these cuts, Graham-Cassidy would leave an estimated 32 million additional Americans without health insurance, according to an analysis by the non-partisan Commonwealth Fund.

The #GrahamCassidy Bill includes an ‘Alaska Purchase’ to woo Alaska Senator, @lisamurkowski. I have faith she can’t be bought. https://t.co/l1N2eFSmiX

The #GrahamCassidy Bill includes an ‘Alaska Purchase’ to woo Alaska Senator, @lisamurkowski. I have faith she can’t be bought. https://t.co/l1N2eFSmiX

However, it’s unclear whether the bill has the votes to pass — or whether Republicans have time to get the votes they need. Thanks to the Senate’s arcane rules, Republicans only have until Sept. 30 to pass the bill with a bare majority of 51 votes. After that deadline, they’ll need 60 senators to approve the bill, which will be impossible given that there are only 52 Senate Republicans and every Senate Democrat will vote against Obamacare repeal.

The GOP can only afford to lose two of their own on this vote — and one of them, Sen. Rand Paul, has already announced his opposition to the bill. Sen. Susan Collins is a likely no as well, making the support of Murkowski — who’s voted against multiple Obamacare repeal efforts — absolutely essential for Republican leadership.

Enter the so-called “Alaska Purchase” — which, it should be noted, has only been reported by IJR and not yet confirmed by anybody in the Senate. Graham-Cassidy may kick 32 million Americans off of their insurance plans, but if none of those Americans are Alaskans, the thinking goes, maybe Murkowski will vote for the bill after all. There’s no policy rationale for exempting Alaska from Graham-Cassidy’s funding cuts, other than to win Murkowski’s vote. It’s a payoff, plain and simple.

At least, it’s an attempt at a payoff. Although the intent behind these reported changes to the bill is clear, what’s much less clear is whether or not they’re sufficient to win Murkowski’s support.

Also, remember how Senate GOP leaders *completely* dropped Murkowski in 2010? I bet she does. https://t.co/A4iMMM50Ia https://t.co/IsWX3ILtam

Also, remember how Senate GOP leaders *completely* dropped Murkowski in 2010? I bet she does. https://t.co/A4iMMM50Ia https://t.co/IsWX3ILtam

In June, during one of Republicans’ many failed attempts to repeal Obamacare, Murkowski said pretty definitively that her vote couldn’t be won simply by sparing Alaska from a repeal bill’s worst effects.

“Let’s just say that [Senate Republicans] do something that’s so Alaska-specific just to quote, ‘get me,’” Murkowski told reporters at the time. “Then you have a nationwide system that doesn’t work. That then comes crashing down, and Alaska’s not able to kind of keep it together on its own.”

Also worth mentioning is that after Murkowski helped tank the last Obamacare repeal vote, she was greeted as a hero by her constituents, 200 of whom showed up for a post-vote “thank you” rally to show their appreciation. In addition to this, Murkowski not up for reelection until 2022, meaning that even there was a political downside to her voting against Obamacare repeal — and it’s not clear that there is — that downside wouldn’t be manifested for another five years.

Nevertheless, if past Obamacare repeal fights have taught us anything, it’s to never underestimate the willingness of a Republican senator to vote for a bill they ostensibly don’t like if it gets them closer to dismantling President Obama’s signature policy achievement. Murkowski’s vote is very much in play, and the Alaska Purchase might just be the ticket to getting it.