You are at:Home»Entertainment»George Clooney ‘cries four times a day’ because fatherhood is so exhausting

Actor and director opens up about family life and how he didn’t think it would ever happen. 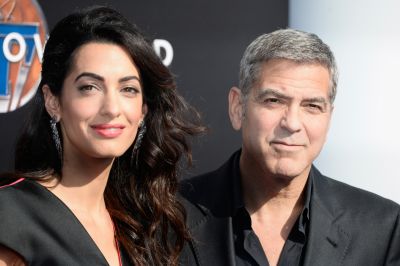 George Clooney has revealed the toll of being a new father of two after he and wife Amal Clooney welcomed twins Ella and Alexander to the world back in June. In a frank interview, the actor revealed he cries “four times a day”.

“I cry more than they do. I cry four times a day right now, because I’m so tired,” he told the Daily Mail. “Hey, remember back when you were single, before you didn’t have to worry about keeping people alive?”

Of course, the 56-year-old actor said he was “thrilled” to be a dad, despite the sleepless nights and hardship of looking after two newborns.

Clooney became engaged to human rights lawyer Amal Alamuddin in April 2014, and they married in September the same year. During their relationship, the Ocean’s Eleven star clashed with the Daily Mail over stories concerning Amal’s family.

He accused the tabloid of “irresponsibility” saying it had been “negligent” in “exploiting religious differences where none exist” in the story claiming Amal’s mother wanted to marry someone from the religious sect Druze.

When The Mail apologised, Clooney refused to accept, calling the publication “the worst kind of tabloid. One that makes up its facts to the detriment of its readers.”

Apparently, given this latest interview, there are no hard feelings any more.

“I’m 56 years old and I didn’t think it was going to happen for me. I thought my life would be focused on my career, not relationships, and I’d sort of accepted that. And then I met Amal and I thought, ‘Well, I have this incredible relationship, this is wonderful.’ And then… all of a sudden we have these two knuckleheads around who make me laugh every day.

“Really, they’re funny kids. He just eats and eats and sits and goes ‘uh-uh’ and I have never seen anything eat so much in my life. And she’s very delicate and feminine, and she’s all eyes and looks like her mother.

“I suppose it makes sense that they should be so different, but I hadn’t seen it firsthand before and it really makes you realise how much nature is part of who we are. Look, today is the first time since they’ve been born that I’ve been away from them, and my wife’s sending me pictures and I’m sitting here thinking, ‘God, I wish I was with my kids’ — and that’s fun.”

Clooney is away from his family to promote new film Suburbicon, which he directed. Written by the Coen Brothers, the film stars Matt Damon, Julianne Moore and Oscar Isaac in a story about the violent side of a seemingly idyllic community.