FORECASTERS have linked wild weather in the west to soaring temperatures in the east, as gusts topping 100km/h lashed parts of the South-West this morning.

Perth has been warned to brace for stormy weather on Friday and over the weekend as Ocean Reef was blasted with 100km/h winds at 7.23am this morning.

But while winter has returned to the west, summer has come early to the east and BOM duty forecaster Bob Tarr says the extreme weather is all linked to atmospheric air currents called jet streams.

In Australia, the jet stream is a westerly wind that sometimes dips and when that happens it causes toughs over Perth and ridges over Sydney, Mr Tarr says.

At the moment, the dip is causing cooler south, south-westerly winds to travel further north than usual. This brings cold fronts over Perth and when a corresponding dip occurs in the east, hot, northerly desert air is pumped over Brisbane and Sydney, Mr Tarr says.

In the north-west of NSW, the temperature could nudge 40s this weekend, smashing heat records for September. Sydney is expected to hit 33C on Saturday and 36C in the western suburbs.

“It’s to do with the jet stream,” Mr Tarr says.

“Right now, it’s a pattern where the jet stream and the cool stormier pattern pushed further toward the north over the western part of the country and over the east, it’s pushed toward the south.”

While the weather is unusual in it’s extremes, patterns like this are not uncommon at this time of the year.

A road weather alert remains in place for Perth on Friday but conditions are expected to the ease in the evening.

While the worst of the stormy weather may be behind Perth now, rain is forecast for the foreseeable future.

Just 1.8mm of rain has fallen in the Perth gauge since 9am this morning, but winds across the state did some damage. L:imbs were ripped from a large tree blocking the west-bound lane on Adelaide Terrace and Rottnest Island was battered with wind gusting up to 96km/h at about 8.30am.

Main Roads have issued a road weather alert for Perth and drivers are urged to switch headlights on, ensure a safe braking distance between cars and allow extra travel time.

Up to 15mm is expected in Perth on Friday, with a maximum of 19C. 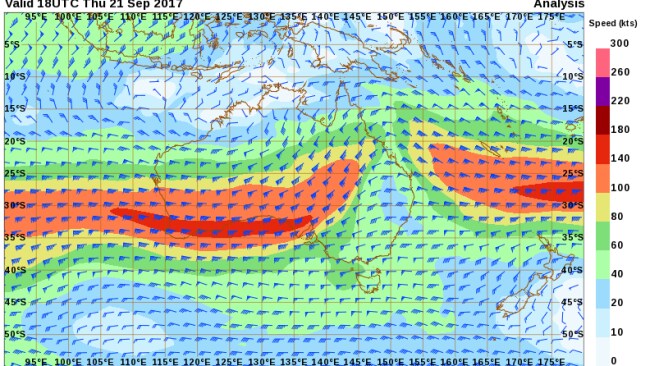