You are at:Home»Science»Forget Trump, it’s all about local climate action

It’s official – Trump is canceling the Clean Power Plan. But US cities, states and businesses are picking up the slack on climate protection. However, it’s not clear if this will be enough. 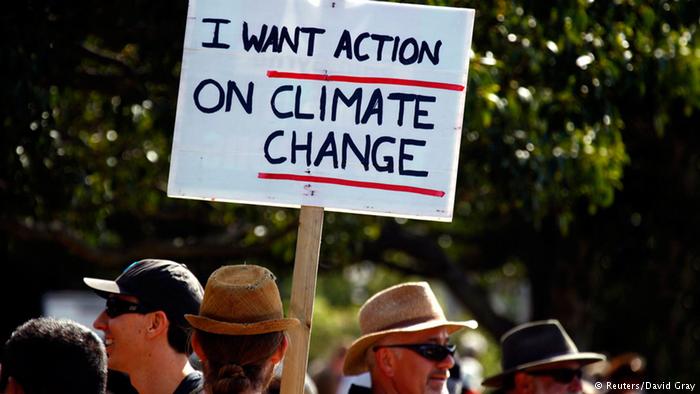 The Clean Power Plan was intended as the key piece of policy that would have allowed the US to reach the goals of the Paris Agreement to limit global temperature rise to less than 2 degrees Celsius.

“This proposal completely dismisses how US emissions contribute to global climate impacts,” commented Sam Adams, director of the World Resources Institute in the US, following the Trump administration’s announcement.

“Following the barrage of super-charged hurricanes, powered in part by warming seas, now is not the time to be backsliding on the country’s obligation to reduce the risks of climate change,” Adams added.

Trump’s gutting of the Clean Power Plan is not unexpected – and barely news for those who have been following Trump’s reversal of environmental standards in general, and climate protection in particular. 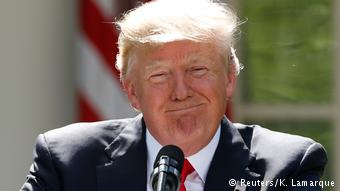 Trump sent a crystal-clear signal of his intentions when he pulled the US out of the Paris Agreement in early June this year (the US and Syria are now the only two nations to not be signed on to the treaty).

But a key question regarding climate protection follows: What does this effectively mean for US greenhouse gas emissions?

That answer may come as a bit more of a surprise.

In an analysis released this past September, the New Climate Institute found that emission reduction pledges by US states, cities and businesses currently allow the US to meet half of its nationally determined contribution under the Paris Agreement.

State, cities and business efforts will reduce emissions 12 to 14 percent below 2005 levels by 2025.

The report analyzed 342 commitments by 22 US states, 54 American cities and 250 businesses headquartered in the US.

States are crucial to climate protection efforts due to the large scale of changes they can make.

But businesses made the most ambitious greenhouse gas reduction commitments of all. 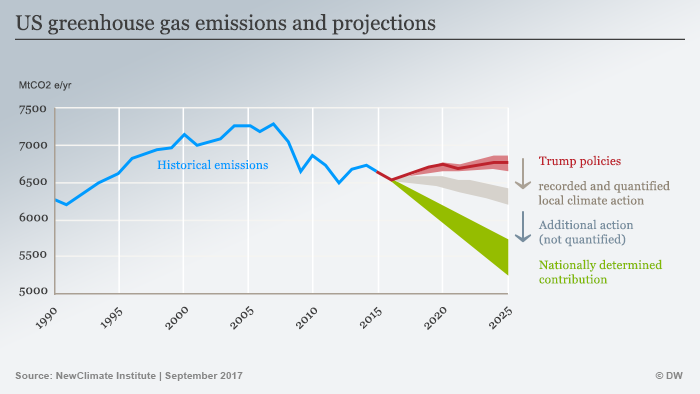 After it became clear Trump planned to pull the US out of the Paris Agreement, several coalitions formed in an attempt to counter this.

The United States Climate Alliance includes California, New York, Colorado and 15 other US states that are working across party lines to coordinate action in order to reduce their greenhouse gas emissions consistent with the Paris Agreement.

On the heels of that coalition, the even-broader initiative “We Are Still In” formed among US cities and counties, business leaders and investors, and tribes and universities. About 2,300 leaders have signed up to the initiative so far. 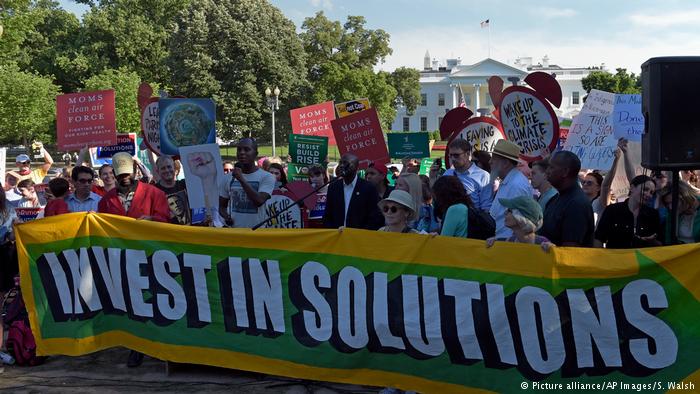 Steve Benjamin, the mayor of Columbia, South Carolina, and co-chair of the Mayors for 100% Clean Energy campaign, explained the city leaders’ motivations in a DW interview.

It boils down to thinking about the future: “It’s good for business, it’s good for the public health of our citizens, and it’s the only way we can turn over to our children the world that they deserve – and their children’s children.”

But the question remains: Is local climate action enough – that is, can it be ratcheted up, and quickly enough – to make up the difference in reducing US emissions?

Niklas Höhne of the New Climate Institute, which sponsored the analysis from September, thinks the answer is clearly yes – particularly when market forces around the expansion of renewables are considered.

He points out that the New Climate Institute report analyzed only a subset of activities: Those that are reported and easily quantifiable.

“These have the potential to close the gap.”