You are at:Home»Headlines»England Women’s bid for World Cup glory ends in final against New Zealand 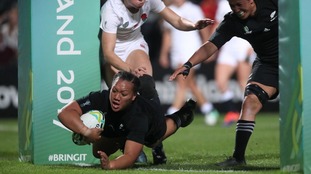 But it was not to be as the Black Ferns overturned a seven-point interval deficit to triumph 41-32. 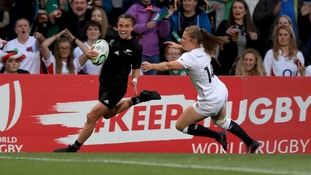 Wing Lydia Thompson scored two tries for England, in addition to a seven-point penalty try, plus a late Izzy Noel-Smith touchdown, and full-back Emily Scarratt booted two penalties and two conversions, yet New Zealand were not to be denied a fifth world title.

Some England players now face an uncertain future – Rugby Foootball Union policy means that existing 15-a-side contracts will switch to sevens for the next two years – but such debate is for another day.

England gave it everything, but they had no answer in the second half, conceding 31 points as New Zealand’s superior pace and power left them reeling.

Both teams went into the final with unbeaten records, winning all three of their pool games prior to the semi-finals, 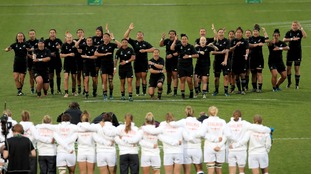 England boss Simon Middleton made an enforced change from the semi-final victory over France, moving Scarratt to full-back as replacement for a concussed Danielle Waterman, while Megan Jones was drafted into midfield alongside Rachel Burford.

And England blasted out of the blocks, creating immediate pressure through their forwards following a superbly placed Katy Mclean kick, and free-scoring New Zealand were immediately forced into defensive mode.

But the Black Ferns struck from their first attack when fly-half Victoria Subritzky-Nafatali kicked cleverly into space and Winiata showed England’s defence a clean pair of heels for an opening try inside 10 minutes.

Scarratt suffered a knock in trying to stem the New Zealand tide, but she was okay to continue after treatment as England looked to assert themselves on the contest, and she opened England’s account through a 14th-minute penalty. 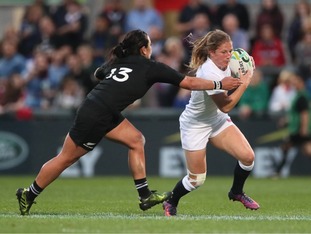 New Zealand were then reduced to 14 players after flanker Sarah Goss was harshly yellow-carded for a dangerous tackle on Mclean, and England, having dominated early territory, knew they needed to make that advantage count.

The Black Ferns could not escape from England’s grasp, and the Red Roses struck again nine minutes before half-time when centre Rachael Burford broke through in midfield and Mclean sent Thompson over via a supremely timed pass.

Scarratt’s touchline conversion underlined England’s supremacy, and New Zealand had it all to do, with the final beginning to drift away from them. 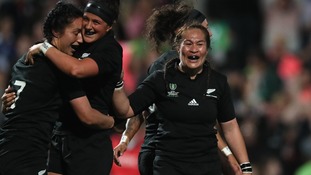 They responded, though, right on cue, with Natua crashing over from close range and England’s advantage was trimmed to seven points at half-time, with the Red Roses leading 17-10.

And it got worse for England within five minutes of the restart, as New Zealand forward pressure resulted in a second try for Natua, with Cocksedge adding the conversion and the Black Ferns starting to enjoy considerable momentum.

A Scarratt penalty – via the post – put England back in front, yet it proved short-lived as New Zealand stormed back upfield and Smith touched down for her team’s fourth try, with Cocksedge adding the conversion for a 24-20 lead.

The game now had no pattern to it whatsoever, and England went back in front when Thompson sprinted over from 40 metres out, only for New Zealand to hit back almost immediately as Natua completed her hat-trick and Cocksedge converted for a six-point lead.

Cocksedge then added a try, and England could find no way back, their World Cup campaign falling at the final hurdle and world-ranked number one nation New Zealand underlining that status in style.