You are at:Home»Headlines»Emmys Security: Event Must Be ‘Not Just Secure but Also Inviting’ 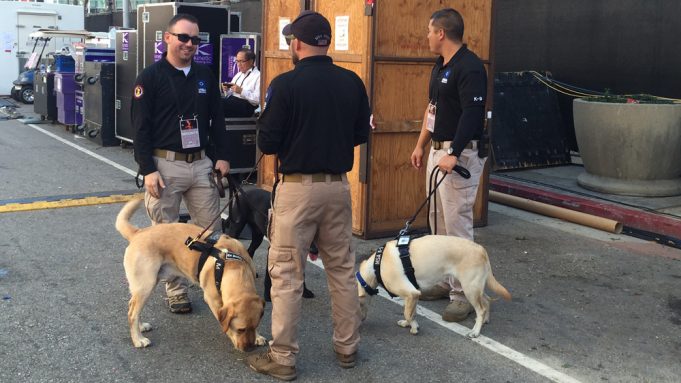 The Emmys will draw thousands of people to the Microsoft Theater in downtown Los Angeles Sunday, presenting numerous challenges to both law enforcement and private security personnel who will be working to keep attendees safe.

The Pinkerton security agency will be one of the groups providing security for the event. Jason Porter, CPP, the vice president of the East region for Pinkerton, says that the key to such events is walking a fine line between tough security and making the public feel at ease.

“One thing we always have to consider is to really focus on creating a security platform that is not just secure but also inviting, because this is a public event that’s openly welcoming crowds of people,” Porter told Variety. “You want to feel welcoming not just on the talent side but also on the fanbase side.”

Porter also said that Pinkerton agents on the ground rely on intelligence gathered by the agency. “We have an intelligence group that is constantly pulling in not only social media information, but any kind of data that could be relevant to a situation like that, then having the vehicle and tools to push that to the agents working details like these major events in near real time is one of our crucial tools as well,” he said.

Of course, no one can plan for everything, but Porter stressed that Pinkerton does everything it can to plan for seemingly unpredictable contingencies. “Part of our job is playing the ‘What if?’ game on any major event,” he said. “We take a look holistically where the vulnerabilities are and we try to assess threats on as broad a spectrum as humanly possible. Then we rely on the probabilities of them happening, the vulnerabilities that venue or the event faces, then we quantify the potential business impact to the event of a threat or attack. So once you build that baseline of your threat times the probability times the business impact, then we’re able to take that and make reasonable recommendations for the event itself.”

The Emmys come on the heels of a terrorist attack in London, in which an explosive device was detonated in a subway station. As a result of that attack, the LAPD has increased security around Metro trains and buses and tourist sites, though it is not known if it will impact security procedures at the Emmys.