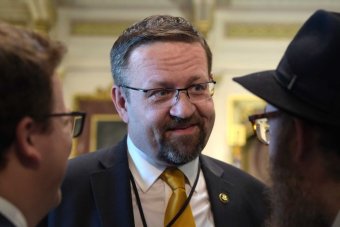 Mr Gorka told AP he resigned but a White House official said the London-born adviser to US President Donald Trump did not resign but “no longer works at the White House”.

That official was not authorised to discuss the matter publicly and spoke on condition of anonymity.

Mr Gorka had reportedly feuded with national security adviser General H.R McMaster and was unhappy with the decision Mr Trump announced this week — backed by General McMaster and the US military — to reorient US policy in Afghanistan.

Mr Gorka is declining to discuss the reasons he has left the White House, but is pointing toward excerpts from his resignation letter that were posted by The Federalist website.

“As a result, the best and most effective way I can support you, Mr President, is from outside the People’s House,” Mr Gorka was quoted as saying in the letter.

“The individuals who most embodied and represented the policies that will ‘Make America Great Again’, have been internally countered, systematically removed, or undermined in recent months.

“This was made patently obvious as I read the text of your speech on Afghanistan this week.”

Mr Gorka, who frequently appeared on cable news shows to tout Mr Trump’s policies, was a divisive figure within the administration, seen by veteran intelligence professionals and diplomats as an ideologue with little real-world experience.

Mr Gorka’s departure comes a week after the exit of chief strategist Steve Bannon from the White House.

A US citizen born in Britain to Hungarian parents, Mr Gorka worked as national security editor at Mr Bannon’s Breitbart news website, where he often warned of Islamic terrorism.