You are at:Home»News»Donald Trump comment on North Korea sparks calls for restraint 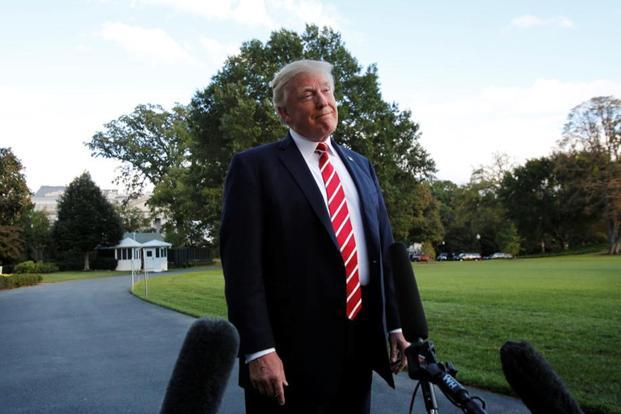 Moscow/Washington: Russia and China called for restraint on North Korea on Monday after US President Donald Trump warned over the weekend that “only one thing will work” in dealing with Pyongyang, hinting that military action was on his mind.

When asked what Russia made of Trump’s comments, Kremlin spokesman Dmitry Peskov told a reporters on a conference call: “Moscow has called and continues to call on the parties involved in the conflict and on those who have anything to do with this issue to exercise restraint and to avoid any steps that would only worsen the situation.”

Commenting on a Trump statement that the US might withdraw from a nuclear deal with Iran, Peskov said such a move would have “negative consequences.”

China hopes all sides do nothing to irritate each other or worsen the problem and speak and act cautiously, she told a daily news briefing.

In recent weeks, North Korea has launched two missiles over Japan and conducted its sixth nuclear test, all in defiance of UN Security Council resolutions, and may be fast advancing toward its goal of developing a nuclear-tipped missile capable of hitting the US mainland.

Trump repeatedly has made clear his distaste for dialogue with North Korea. Last week, he dismissed the idea of talks as a waste of time, a day after secretary of state Rex Tillerson said Washington was maintaining open lines of communication with North Korean leader Kim Jong Un’s government.

“Our country has been unsuccessfully dealing with North Korea for 25 years, giving billions of dollars & getting nothing. Policy didn’t work!” the US president said in a Twitter post on Monday.

Trump’s comments seemed to further suggest that military action was on his mind.

On Saturday, Trump made a similar comment on Twitter about how negotiations have failed for 25 years and said “only one thing will work” with North Korea.

US defence secretary Jim Mattis on Monday told the US Army to be ready with military options on North Korea, but emphasized that efforts to deal with Pyongyang were being led diplomatically.

“There is one thing the US Army can do and that is you have got to be ready to ensure that we have military options that our President can employ if needed,” Mattis said in a speech at an annual US Army conference.

“We currently are in a diplomatically led effort and how many times have you seen the UN Security Council vote unanimously, now twice in a row, to impose stronger sanctions on North Korea,” Mattis said. Reuters

Ben Blanchard in Beijing contributed to this story.