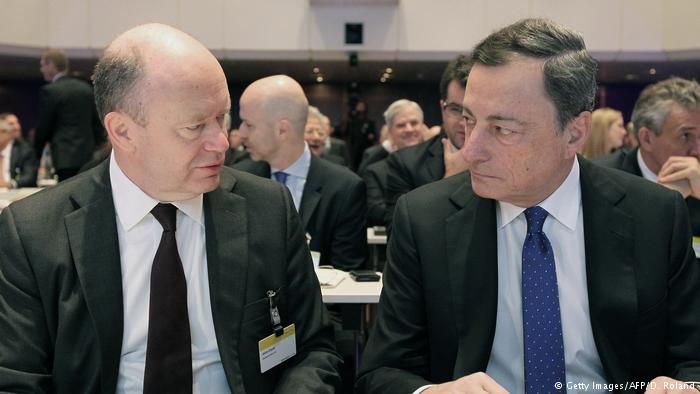 Speaking at the “Banken im Umbruch” (Banks in Change) conference organized by the German business daily Handelsblatt on Wednesday, the Deutsche Bank chief executive (CEO) criticized the ECB’s ultra-low interest rate policy, demanding that the “era of cheap money in Europe” must come to an end.

“The real economy is doing well. The market is expecting I think an increase in interest rates… Let’s start doing that,” he told the bankers gathered in Frankfurt, Germany.

Low interest rates, money printing and a penalty charge for commercial banks hoarding cash at the ECB have been at the heart of attempts by the eurozone central bank to reinvigorate the European economy in the wake of the 2008-09 financial crisis.

In a reference to the ECB’s negative interest rate on some deposits, he added: “It can’t be forever that deposit-taking is lossmaking for banks.”

Cryan’s swipe at the ECB came only one day ahead of a meeting of the central bank’s governing council which is expected to keep rates unchanged at a historical low of zero percent. However, there is a slim chance of policymakers to provide a hint at when they want to start phasing out the ECB’s massive stimulus.

Under its current quantitative easing (QE) program, the bank buy’s sovereign bonds and corporate debt to the tune of 60 billion euros ($71billion) each month, pumping more than 2 trillion euros into markets so far.

The head of Germany’s largest commercial bank warned of the fallout from cheap money, cautioning against using the strong euro as a justification for printing more.

“We are now seeing signs of bubbles in more and more parts of the capital market,” he said.

In his speech, Cryan also described Germany’s financial hub, Frankfurt, as the most natural location for Europe’s finance industry as banks move from London in the wake of Britain’s decision to leave the European Union.

“There is only one European city which can fulfil these requirements and that city is Frankfurt,” he said, pointing to Frankfurt’s supervisory authorities, law firms, consultancies and airport.

Britain’s planned departure from the EU has prompted banks and investors in London to examine other cities to keep a foothold in the bloc, allowing them to sell across the continent without additional costs or trade hurdles after Brexit.

Frankfurt and Dublin have emerged as the most popular centers — ahead of Paris and Amsterdam.

Noting that a lot of people “working like robots” would be replaced by robots, he mentioned accountants as an example because they “spend a lot of the time basically being an abacus.”

“In our banks we have people behaving like robots doing mechanical things, tomorrow we’re going to have robots behaving like people,” he said.

Germany’s biggest commercial bank has already committed to cutting 9,000 of its 100,000 direct employees and 6,000 of its 30,000 indirectly employed contractors as part of a five-year restructuring plan.

Cryan said further jobs would be cut as the bank embraced new technology. “The truthful answer is we won’t need as many people.”

Yet, the CEO also provided some hope for the bank’s staff, saying that some jobs could be “upskilled” and become more interesting. Moreover, the impact of automation for directly employed staff would be cushioned by primarily reducing the bank’s network of outside contractors, for example in the Philippines and India.