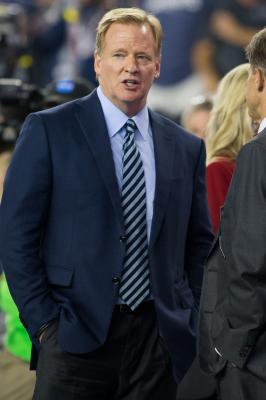 Trump was speaking at a political rally in Huntsville, Ala., on Friday night when he took on the NFL and its players.

“We’re proud of our country. We respect our flag,” Trump said to loud applause at the campaign event. “Wouldn’t you love to see one of these NFL owners, when somebody disrespects our flag, to say, ‘Get that son of a bitch off the field right now’? He’s fired! He’s fired!”

Goodell responded Saturday with a statement:

“The NFL and our players are at our best when we help create a sense of unity in our country and our culture. There is no better example than the amazing response from our clubs and players to the terrible natural disasters we’ve experienced over the last month.

“Divisive comments like these demonstrate an unfortunate lack of respect for the NFL, our great game and all of our players, and a failure to understand the overwhelming force for good our clubs and players represent in our communities.”

The NFL Players Association earlier declared the “union will never back down” in supporting players’ rights.

“Whether or not Roger and the owners will speak for themselves about their views on player rights and their commitment to player safety remains to be seen,” NFLPA executive director DeMaurice Smith said in a statement posted to Twitter on Saturday morning. “This union, however, will never back down when it comes to protecting the constitutional rights of our players as citizens as well as their safety as men who compete in a game that exposes them to great risks.”

Now-unemployed quarterback Colin Kaepernick drew national attention last season while playing for the San Francisco 49ers when he knelt during the national anthem as a protest against racial injustice. A number of players followed Kaepernick’s lead by taking a knee during the anthem.

Trump said an NFL owner who releases a player for kneeling during the anthem would gain support across America.