You are at:Home»Sports»Cleveland Indians Are Favorites to Win World Series, but Chief Wahoo Haunts Baseball

The Cleveland Indians are the odds on favorite to beat the New York Yankees in the American League Division Series (ALDS) that starts Thursday night, and to eventually win the 2017 World Series after losing to the Chicago Cubs in last year’s Fall Classic. Their pitching ace is Corey Kluber, whose slider is probably the most effective pitch in baseball, and the team’s offense—led by dynamic 23-year-old shortstop Francisco Lindor—can put crooked numbers up against almost any opposing hurler.

Related: MLB: Red Sox eject ‘racism is as American as baseball,’ protesters from Fenway Park during loss to Oakland Athletics

But success sometimes leads to increased scrutiny, and the team’s logo—Chief Wahoo, a grinning, candy-red cartoon of a Native American man—has stirred controversy for more than half a century and again is in the spotlight this month. Critics feel the logo brings pain and humiliation to indigenous people, and protests are being staged outside Progressive Field for every Indians home game this postseason. It’s a potential problem for Major League Baseball (MLB), which has fought hard to sell America’s oldest major sports league to a new generation of fans, some of whom may be less sympathetic to the idea of preserving tradition in the face of accusations of racism. 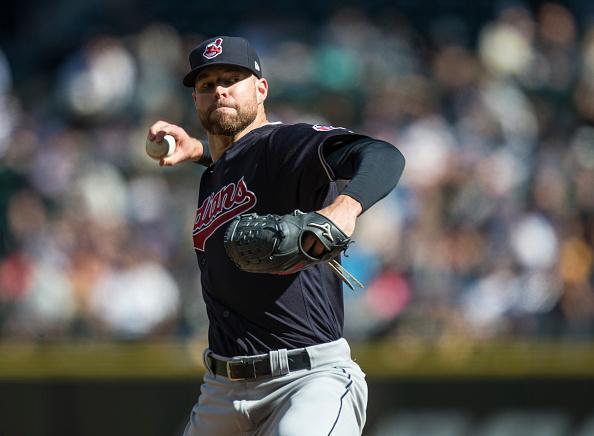 SEATTLE, WA – SEPTEMBER 24: Starter Corey Kluber #28 of the Cleveland Indians delivers a pitch during the third inning of a game against the Seattle Mariners game at Safeco Field on September 24, 2017 in Seattle, Washington. Photo by Stephen Brashear/Getty Images

“Everywhere we go in this city, we have the smiling face of racism staring back at us,” says Philip Yenyo, a Cleveland-based civil rights activist whose group, the American Indian Movement of Ohio, is participating in the protests. “I love the game of baseball, but I can’t bring my 7-year-old son to the game so he can watch people dehumanize him.”

MLB recently made a promise to further limit the use of the Chief Wahoo logo (the team instead wears a stately looking crimson “C” during some games), but Indians owner Paul Dolan told a local radio station in August that the team and the league had not come to any agreement on the subject. Yenyo says he doesn’t trust promises like these, because as things stand the logo earns too much money for the league. 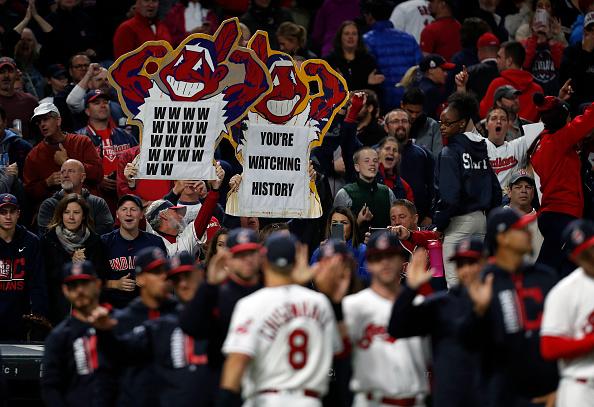 MLB statistics suggest the Indians are a mid-pack team in terms of sales of merchandise, ranking 16th despite having come heartbreakingly close to winning a World Series last year. MLB also notes that only 20% of Cleveland Indian items sold on its website use the Wahoo logo. The number may be somewhat deceiving, however, as the top-selling Cleveland Indians hats on the site have all Wahoo on them, according to an advertising graphic on the site that reads “top-selling baseball caps.”

“They’re earning blood money off the backs of indigenous people,” Yenyo says, noting that all 30 MLB teams earn money from the logo in some respect. “It’s a symbol that indoctrinates small children at these games into feelings of racism before they’re even old enough to think for themselves.”

MLB says it has consulted with at least one indigenous group, the National Congress of American Indians, about the idea of changing the imagery surrounding the team. “We’ve also had ongoing conversations with the team,” Pat Conroy, a spokesperson for MLB, tells Newsweek. “It’s something we think is an important issue.”

Sundance, a Native American activist from the Cleveland branch of the American Indian Movement who has long participated in protests against the logo, tells Newsweek local activists have not been given a say with the league, despite multiple attempts to make contact. He and Yenyo say there is increased urgency in pushing back against the Wahoo logo during this particular postseason run. For one, there has been recent national news coverage of a Native American rights issue: the mass protests against the Dakota Access Pipeline, which started in 2016 in response to an oil pipeline being built through fresh water and sacred Native American burial grounds in South Dakota. Another reason is the promise of the Indians ball club.

“The fact that the team is good helps us show the world what’s happening,” Sundance says. “Personally, I don’t have any confidence that the team will do anything about this racism.”

The Cleveland Indians declined to comment to Newsweek on the subject of Chief Wahoo, or on the protests against the logo being planned for throughout the playoffs. 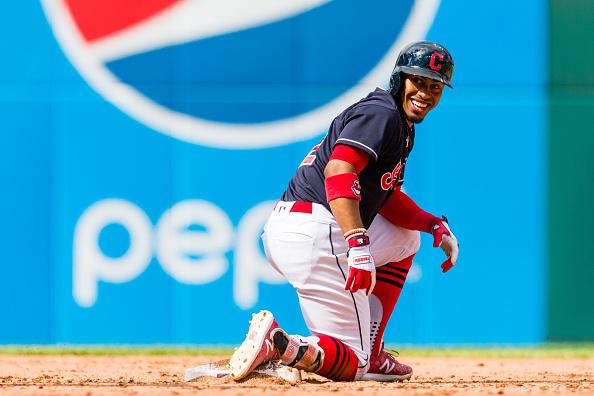 CLEVELAND, OH – SEPTEMBER 28: Francisco Lindor #12 of the Cleveland Indians looks back to the Minnesota Twins dugout after hitting a double during the sixth inning at Progressive Field on September 28, 2017 in Cleveland, Ohio. The Indians defeated the Twins 5-2. Photo by Jason Miller/Getty Images

One encouraging step for Native Americans who are eager to see the Wahoo logo disappear is the help they’re expecting to receive from outside groups, including Democratic Socialists of America (DSA), a left-leaning organization that has seen a boost in membership since the election of President Donald Trump. Andrew Schriver, a white, 26-year-old defense lawyer who is a member of the he Cleveland branch of DSA, tells Newsweek the group expects to be at every home game for the protests, showing solidarity with indigenous groups that want to see Wahoo disappear.

“There’s this provincial mindset here that it’s Cleveland against the world and that if we change our ways, we’re somehow caving into outside forces,” Shriver, a lifelong baseball fan, says of the struggle to change the imagery surrounding the team. “But I just think that they ripped this Band-Aid off, nobody would really give a damn about the logo three years down the line.”