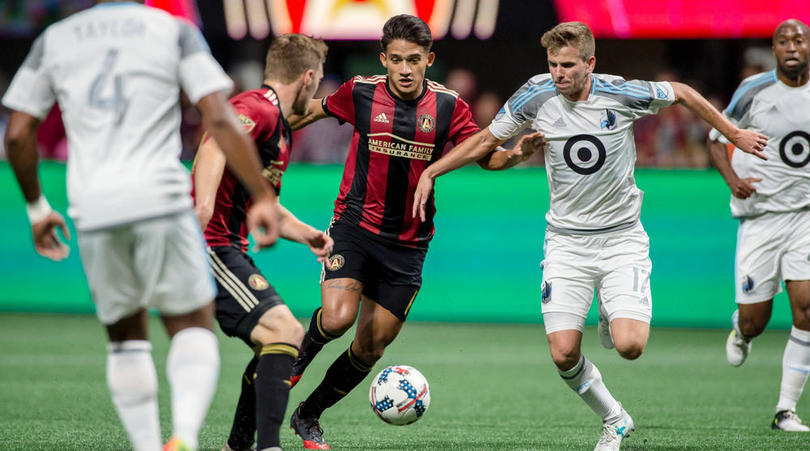 VAR, a red card and a 96th-minute winner. Tuesday’s match had it all as Minnesota United shocked 10-man Atlanta United 3-2.

But Atlanta were not hampered by their numerical disadvantage as quick-fire goals from Hector Villalba and Julian Gressel gave the hosts the lead, until substitute Christian Ramirez restored parity in the 90th minute and Minnesota team-mate Kevin Molino scored in the sixth minute of stoppage time.

The defeat was Atlanta’s first at Mercedes-Benz Stadium as their eight-match unbeaten streak came to an end in stunning circumstances.

With the loss, Atlanta stayed third in the Eastern Conference and three points adrift of second-placed New York City, while fellow expansion franchise Minnesota remain ninth in the west.

It was not until the second half that the contest in Atlanta came to life after a physical opening 45 minutes.

Danladi produced a moment of brilliance to silence the 43,185-strong home crowd, his shot riffling into the top corner of the net.

Atlanta’s woes were compounded when Reynish was shown a red card for denying a goalscoring opportunity on the hour-mark following a video review.

But Atlanta refused to surrender after Villalba reduced the deficit from outside of the penalty area in the 67th minute before Gressel struck five minutes later.

THAT ball. THAT finish.

Atlanta’s joy, however, turned to despair as Minnesota made the most of their numerical advantage at the death.

Late drama saw Ramirez came off the bench to equalise in the final minute of regulation before Molino’s last-gasp header capped off a stunning night.