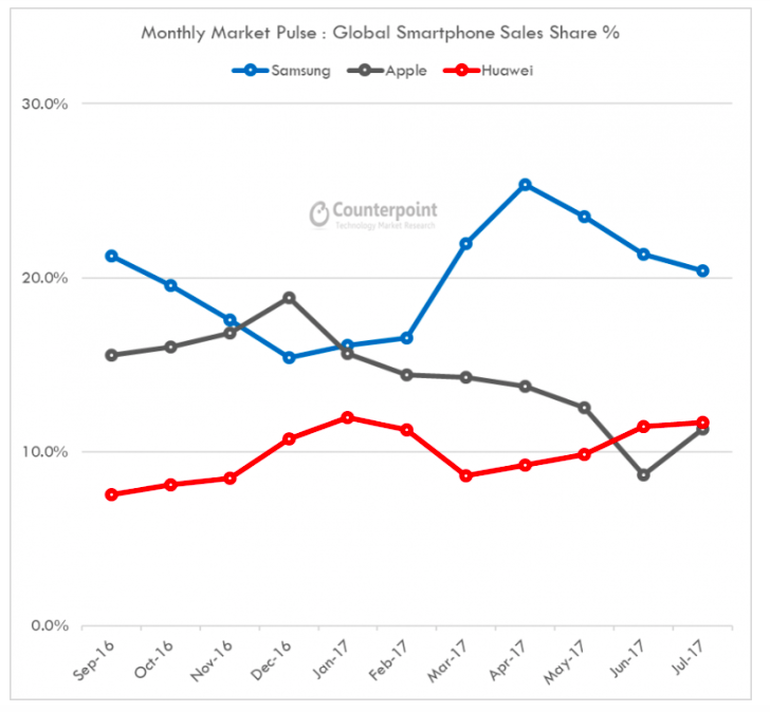 Seven years after entering the smartphone race, Huawei now sells more smartphones worldwide than Apple — yet none of the Chinese company’s models is in the world’s top 10, according to research firm Counterpoint.

Wrenching the No. 2 slot from Apple is a notable achievement given that Huawei, which formerly only sold telecoms equipment, launched its first Ascend smartphone for Western markets in 2010.

Huawei is still not a hugely popular brand in the US, but sales in China, Europe, Latin America, and the Middle East helped propel it into second spot behind Samsung in July, according to Counterpoint.

And it’s not winning on price alone. Counterpoint puts Huawei’s rapid growth down to investment in R&D and manufacturing, marketing and sales channel expansion.

The company’s analysts reckon Huawei and other Chinese brands such as Xiaomi and Oppo have stifled growth prospects for Apple and Samsung in China, Europe, and Latin America by “outsmarting and outspending” them in sales, marketing, backed by better hardware.

Despite Huawei’s coup, the analyst firm highlights a number of weaknesses in Huawei’s current state. The company has released high-end, big-screen flagships such as the P10 and Mate 9, but not a single Huawei phone is among the world’s top 10 best-selling models. Or, as Counterpoint analyst Pavel Naiya put it, Huawei still lacks a “true hero device.”

Apple on the other hand has three iPhone models in the top 10, which is led by the iPhone 7 and iPhone 7 Plus. Following Apple’s current flagships are the Oppo R11, Oppo A57, Samsung Galaxy S8, Xiaomi Red Note 4X, the Galaxy S8 Plus, iPhone 6, Galaxy J7 Prime, and Galaxy A5.

“While Huawei has trimmed its portfolio, it likely needs to further streamline its product range like Oppo and Xiaomi have done — putting more muscle behind fewer products,” said Naiya.

Huawei is also over-reliant on China, where it leads with a fifth of all smartphone sales, and doesn’t have a strong presence in South Asia, India, and North America. It may be able to address this shortcoming in the US next year, with the firm reportedly having locked in a deal with AT&T to launch the Mate 10.

Still, the firm’s analysts believe Huawei, Oppo, Vivo, and Xiaomi are now as important to the global supply chain as Samsung and Apple, which has helped them to deliver more competitive features, including thin bezels, in-house chipsets, augmented reality, and better cameras than before.

That Huawei has overtaken Apple now was in the cards. According to IDC’s second quarter shipment figures, Apple had a 12-percent share of worldwide smartphone shipments, with 1.5 percent year-on-year growth, compared with Huawei’s 11.3-percent share on the back of 19.6-percent growth.

However, with the imminent arrival of the iPhone 8, Huawei’s lead over Apple could be short-lived.

iPhone 8 could be bad news for Android handset makers

If Apple can use a high-priced iPhone 8 to offset a price cut for the rest of the iPhone line, makers like Samsung and LG could be in for a world of hurt.

According to IDC, the upcoming iPhone 8 launch will drive iPhone shipments up by 9.1 percent in 2018.