You are at:Home»News»A former white supremacist has a potentially unpopular message for how to stop extremist movements

Hate groups are on the rise in the US, prompting questions over how to stop the spread of such ideologies.

The deadly white supremacist rally in Charlottesville, Virginia, has laid bare the reality that far-right, extremist movements are on the rise in the US, prompting questions about how to combat the spread of hate groups.

The rise has coincided with increased activism against those groups, most prominently by the so-called antifa movement. The decentralized movement, which includes a mixture of anarchists, socialists, communists, and other far-left activists, has taken a direct-action approach to combat far-right groups.

In many cases, that has turned to violence and property destruction. Sometimes, that has come in self-defense, as appears to have been the case in Charlottesville. Other times, it has not, such as when antifa activists smashed windows and hurled smoke bombs during a series of riots following Trump’s election in Portland, Oregon. Or when an activist punched avowed white nationalist Richard Spencer in the face on Inauguration Day.

“You need violence in order to protect nonviolence,” Emily Rose Nauert, an antifa member best known for being punched in the face by a white nationalist during a clash at Berkeley in April, told The New York Times. “That’s what’s very obviously necessary right now. It’s full-on war, basically.”

But Christian Picciolini, a former white supremacist, says violent resistance is likely to do more harm than good in efforts to diminish far right groups’ power and size.

“I don’t think anyone in the world became anti-racist because they were punched in the face by a protester or hit with a bottle of urine,” Picciolini told Business Insider. “It simply becomes harder for them to come back. They get pushed further away.”

Disowning or publicly shaming family members that participate in far-right groups, as happened after the Charlottesville rally, is likely to  drive them “further down that path,” rather than shock them into leaving, he said.

Picciolini has a potentially unpopular message for how to deal with neo-Nazis and white supremacists: Show compassion.

Picciolini would know — after spending his teens and early 20s as the leader of the neo-Nazi group Chicago Area Skin Heads, he left the movement and its hateful ideology.

These days, he leads Life After Hate, a nonprofit organization dedicated to helping neo-Nazis, white supremacists, KKK members, and other activists leave their organizations and rehabilitate.  Life After Hate uses one-on-one counseling to convince extremists to leave their organizations. The group also arranges meetings between extremists and the people they profess to hate. Continuing group therapy and connecting with a network of “formers” follows.

Most people in white-nationalist and neo-Nazi movements, Picciolini says, are “marginalized,” alienated, and often desperate young people who have had their insecurities exploited by others.

“I’m not defending their  choices , but at some point we have to look at them as victims that were co-opted and put on that path,” Picciolini said. “They didn’t find what they were looking for in the real world and they started looking on the margins.”

The question of how to turn the tide against right-wing extremism and white supremacy isn’t a small one. Heidi Beirich, the director of Southern Poverty Law Center’s (SPLC) Intelligence Project, which monitors hate group activity online, told CBS News that the SPLC has “never seen” the amount of hate groups operating today or the extent to which their ideas have proliferated.

The SPLC currently estimates there are around 900 active hate groups in the US, a number that has been rising since 1999 and saw major spikes after the presidential elections of Barack Obama and Donald Trump. 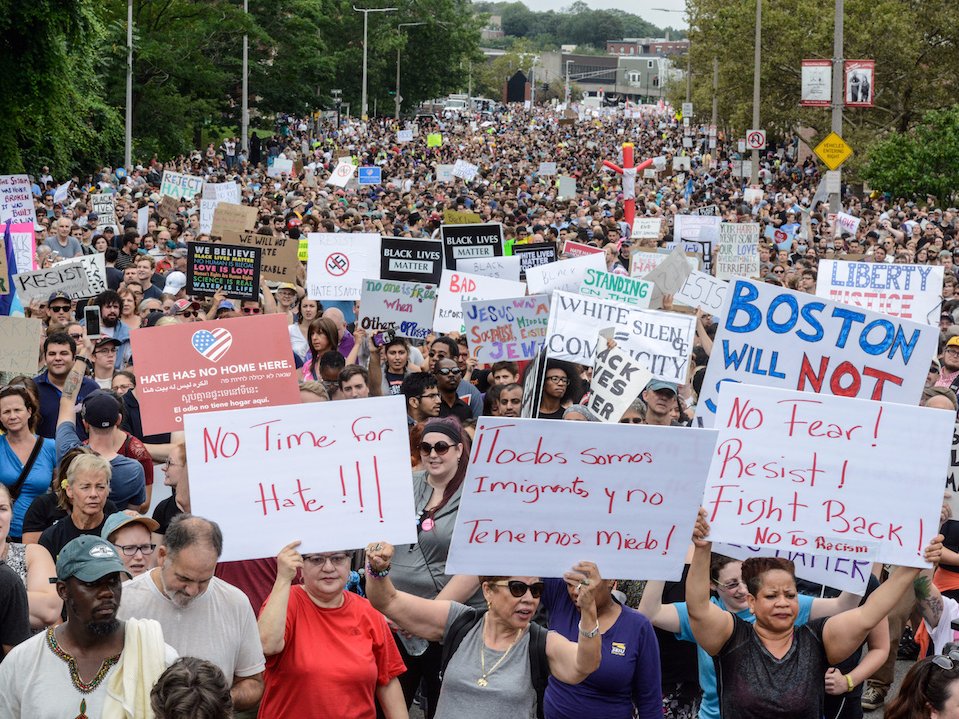 A large crowd of people gathers ahead of the Boston Free Speech Rally in Boston, Massachusetts, U.S., August 19, 2017. REUTERS/Stephanie Keith

That has left Picciolini, whose group has rehabilitated hundreds of extremists, wondering how to scale Life After Hate’s approach.

While one-on-one counseling is the best method, he says, instances of mass peaceful demonstration as happened in Boston last weekend can be effective, as well. But, he says, in many ways, responsibility lies with each American individually to make anti-hate a part of daily discussion and to reach out to those in their network who may be veering toward an extreme path.

Life After Hate was awarded a $400,000 grant for its work by the Obama administration days before Obama left office, but the grant was rescinded without explanation in June. Picciolini said the organization had seen a flood of donations since the events in Charlottesville.